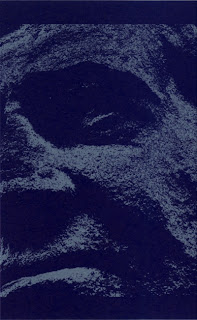 The nice thing about tape releases is that artists really have to try their best to have both sides of the tape filled. This gives them the restriction of not creating enormous long drones consisting of only one tone that go for hours on end. On the other hand, you can just as easily buy a C1 cassette with only 30 seconds of playing time at each side as you can C122 tapes with just over one hour on each side. Nevertheless, many tapes are fully loaded with sounds.

This release is featured on a C60 tape, so only 30 minutes on each side. Made by Alain Jans and released on Tape Fiend from the US of A. The cover art follows all other releases on Tape Fiend, consisting of a picture on the front and all other information on the J-Card.

I, personally, have never heard of Alain Jans, except for this release. So I am not able to tell much about him, maybe you are able to tell me? Leave a comment if you have some information.

Now for the music itself! Analog style drones piercing into your brain.The A side (1e Partie: Nous Sommes Vivants) starts off with bell like sounds sequenced in a pattern that reminds me of an old modem starting to dial-up. Slowly, but certainly, more and more distorted low drones are starting to come in. Halfway through, this almost half an hour track, little blobs occur and mix very well with all the low drones and distortion. After this semi hour track it feels like you have been inside a water tank getting sounds played through underwater speakers.

The B side (2e Partie: Chant De L’Ombre) has a more eerie feeling about it. It feels like being hunted down by a witch (watching The Blair Witch Project again) or being in an industrial plate cutting facility. The cutting is followed by a low drone drum. All of this is accompanied by nice atmospheric sounds that give the track more atmosphere (that is very logical, isn’t it).

As a con of this release, I can think of only one. But it is a big one. The tracks are too long. It could have easily been two tracks of about 10 minutes. Then everything would have been explored. But atleast he filled both sides.Maybe if I knew Alain better and knew his Equipment and the reason for this release he would get higher points. But whats the use of subjective points anyway.

This entry was posted in Uncategorized and tagged Drone, experimental, industrial. Bookmark the permalink.