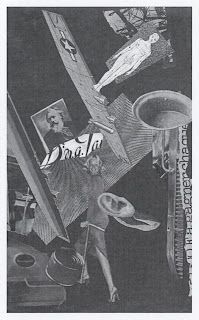 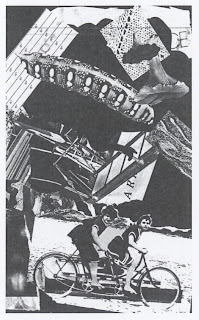 This time I will review two tapes at the same time. Why? Because I can. No, it is because you can see this almost as one release. Released together with ‘Normal Music’ and ‘Flesh Metal Orgasm’ on the great label Blossoming Noise.

Masima is currently (re-)releasing old stuff from the 1980’s and 90’s. A lot of them on cassette. But these tapes are not a real re-release of old music by Masima, but a remix of the old Remblandt Assemblage cassette, that was also featured in the Merzbox as cd3.

Anybody in the experimental/noise scene who hasn’t heard of Merzbow must have been living under a rock for some time. This prolific man has released hundreds of recordings. It are so many that I think he doesn’t even know what he has released in all those years. From extreme noise walls to the more experimental, alone or with others (Sonic Youth, Nordvargr and Alec Empire to name some), live or in his bedroom studio.
The packaging is a form of Dadaistic art. Merzbow has lend his name from Merzbau, a construction of waste in the house of Dadaist Kurt Schwitters. So the packaging really suits the content.
The music on the cassettes are definitely of the not-so-noisy type. As said before, it are remixes of the ‘songs’ on the old Remblandt Assemblage cassette. At a first listen it sounds like some child is playing on a broken piano and a cat is scratching its claws on a sheet of metal. But these tapes really need to grow on you and you have to be in an Merzy mood to feel how great this actually is. Remixing incoherent sounds into something new is really a challenge on its own. But this is what Masima does best. Creating such an atmosphere in his tracks that you have to keep listening to them to figure out what sounds are used in creating the tracks. Even if it is a HNW or something easier listening like these tapes, they all have deep structures.
So these are just two little tapes in the vast pool of Merzbow releases. But if you are not in a noisewall state of mind, they might just be the good ones to be listening to.

This entry was posted in Uncategorized and tagged experimental, noise. Bookmark the permalink.