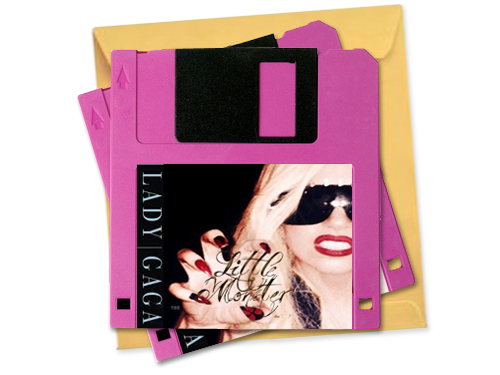 While staring at the package of Lady GaGa’s Little Monster floppy, I wondered to myself how many pop idols have ever put out floppy discs? I figure Madonna probably had one. Maybe even Michael Jackson. I could get down to that.

Probably one of the strangest things we’ve received at YIKIS lately are these two floppy discs by a certain Lady GaGa, full of lobit rendered versions of her music, nothing of which I’ve ever sat and listened to before. I… really don’t know what else to tell you. That pretty much says it all. Did I mention it’s lobit? Yeah… really weird. o_o

Disc A begins with ‘Intro’, ten seconds of what I think is supposed to be a vocal and string section, crackling with bit artifacts. It’s really bizarre though, because even with the roughness of the bitrate, you can still almost tell that it was previously pretty well produced. I don’t know how, but you can.

Then we move on to the titular ‘Little Monster’, which ups the bitrate to 24kbps thankfully, but that might not have been enough for the sound of this track to translate the way the producers likely intended. Except to my ears, it’s kind of a lot of fun to listen to. Huge amounts of compressed bass pummel me in the first few seconds, a rhythm and bassline blurring into one big soundwave blast. Then some vocals come in, cutting through the distortion and threatening to destroy my small computer tweeters. There was a loud whooshing sound leading into what was probably supposed to be the chorus, but it sounds like a RedSK record, harsh frequencies splitting under the duress of the compression. They probably should have done a little research into lobit music before putting these floppies together, for whatever reason they did so, and maybe chosen a format like ogg vorbis that can handle lower bitrates better than mp3s do. Oh well! The result is fascinating. It kind of returns to a verse section again after a corroded sounding section with sampled vocal patterns.

‘At Your Side’ is another 24kbps corrupted pop romp, starting with a 4/4 house bump that so far might be the cleanest sounding thing on the album that I’ve heard. It doesn’t last long, though, when suddenly everything drops off and is replaced with a loud, chest-rattling wail of vocal choruses and… what are probably synthesizer bass lines, and then it sounds as if hell were ripping a portal into my living room, demons shoving chainsaws up each others’ asses and screaming. It’s really quite amazing. GaGanoize.

It ends there with the limited capacity of the floppy disc, so I pop in disc B. This part of the record begins with a track titled ‘Who You Are’, which seems like a nightmare of compression. I can barely hear anything at all for practically the whole first minute of the song except for the data-trickle sound of artifacts shitting up the mix. The issue never fully resolved, as at about the 57th second mark I started to hear what I think was the track way in the background, barely audible. None of the rest of the tracks on this disc had that issue, so I believe that someone involved in the rendering and production of the floppy must have messed this track up. Oh well!

Next is ‘Paws Up’, which pumps up the volume, but it’s like a heavily compressed shit at 16kbps, only the barest trace of the pop it once was. A flush of bits scatter out any time another sound even threatens to try and enter the mix unscathed. So wild!

After that one comes ‘Forever (Alone)’, which is pretty nice. I think it’s trying to be a slower, depressive ballad type piece of music and the compression artifacts here actually kind of enhance it’s mood. The rhythm is the best part… when it finally comes in, the bass sounds like someone farting into a mic. xD

The final track here is ‘Outro’, a loud, 8kbps explosion. What the fuck!?

Anyway, wow, this is such an oddity, a curiosity piece… is it worth feeding money into the capitalistic soul-sucking industrial complex just to nab a copy? I don’t know. Maybe just a little. Because I’m sure nobody is really even making a profit off this floppy, it seems like maybe a poorly (or very well!) executed ploy to break into the lobit scene or something. Here’s a link to the label that put it out, though I couldn’t find a direct link to the floppy there:

This entry was posted in Uncategorized and tagged lobit, noise, pop, rock. Bookmark the permalink.