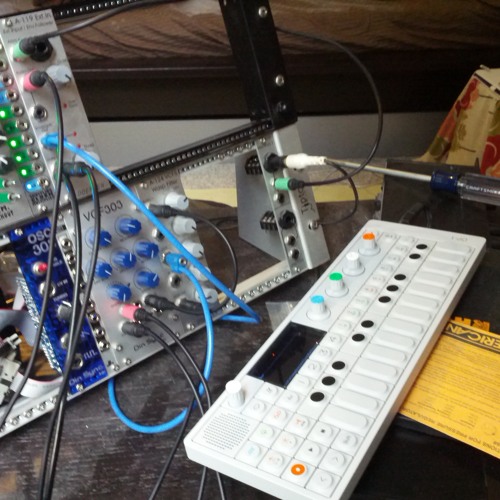 Jr. Flynn is an artist I discovered while watching An Inconvenient Anime by MillionDollarExtreme, who puts up all kinds of crazy and often hilarious things on the ‘tubes. A lot of it ends up on the… other ‘tubes… which is where I had originally found much of it. Of those tubes, I can say no more. I decided I’d have to check into the music further, though, hence the writing of this review.

‘2013.5.14’ begins with a basic synth bassline, reminding me a bit of Tangerine Dream. The subtle harmonics between notes are nice… a filtered, oldschool drum break comes on. According to the page this was an…

… damn, I miss having an EDP Wasp around. I thought for a moment that I recognized the OP-1 from the image above, but wasn’t confident enough in my gear knowledge to venture that guess. The track is very nice, chill, evoking the simple pleasure of hearing analog gear run through step-filter modulations; light, fresh, funky electronics. I thought I heard a “meow” for a second there… I feel like I can’t roll it back to check, though, because I don’t want to fuck up the flow.

This is a good teaser for more of Jr. Flynn’s music, which I very well might be browsing for awhile afterward! You can nod along with me to the sounds at the following link:

This entry was posted in Uncategorized and tagged analog, electro, Electronic music, Techno. Bookmark the permalink.