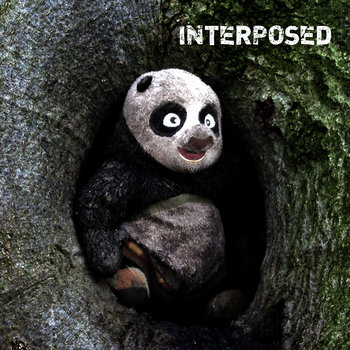 The tenth edition of a well-organized and dedicated experimental compilation series by the Alternation Circuit label has hit the internet for free download galore. It is called ‘interposed’ and features a trapped Panda on its cover. It makes me think about this legendary Panda that has its own television channel in Thailand. It’s basically like the concept of ‘big brother’ with the panda stuck in his cage and surrounded by camera’s following every move or bite that it takes. The popularity of this Panda is gigantic, the sadness came just a couple of days ago when the channel had to switch of while the lonely panda was flown back to its home country China to mate with another Panda partner. Although it seems very fair that the panda deserves some private sexy time of camera, the cravings by its own fan club for its return on television are on a panicky edge! What will they watch while panda is away? Re-runs of Panda munching on sugar cane? What does this all have to do with the compilation? I’m not totally sure, but the facial expression of the panda on the cover is priceless considering the reality of this crazy story.

As I’m sure panda is celebrating and enjoying the companionship, we as listeners also should be in a festive mood with this tenth episode of compiled experimental diversities.  It all starts with an artist called Gerald Fiebig. Gerald experiments with sounds that seem to be carefully milked out of fine machinery. They are recorded in a very sterile environment giving each sound enough space and cleanness to be enjoyed in its naked state.

The track that flows perfectly in the footprints of mister Fiebig is made by Ivanov Down. It’s exploring a more colorful palette of sounds and feels like a pretty showcase of computerized elements that are communicating and moaning among each-other.

Than a joyful eccentric moment of what the fuck is delivered by the band called ‘Huh’. It’s freeform creativity seems to border punk, rock, dada-ism, glitch, jazz and plain insanity!

Artist Jacob Brant comes to the rescue with an intensive work that balances silence and calm tones into something that is thrilling and at the same time relaxing. It’s an extra ordinary piece that keeps the ears wide open to receive the lightly shaped psychedelic pretty world that has been created over here. The track is absolutely worth the trip as it opens up wonderfully like a beautiful lotus in the holy river. Very pretty!

D. Burke Mahoney takes over with a soft but brushy breath of air. It’s something that fits the description of being ‘Death Ambient’. Although it seems rather be more alive than death but that could be the product of being on life-support in a local hospital. It has an pulse and so there is hope for survival in the bland world that has been sketched out over here.

Radiator 865 takes on the task to put the vibe into a more festive one! This is done with a rolling playful beat and animalistic band-member playing its contagious guitar as if its squeeky wooden door with the taste for banana punk! Whatever the description means this track works out well to show of your mental dance moves in a delightful drunken sailor fun way!

Next up is a track that blends dubstep with electro and even some chiptune appearances. Personally I think it comes across as a bit too loud, as if it pushes the sound boundaries because its afraid you’ll not hear the magnificent melodic parts and hip beeps and stuff. When turned it a few notches down its nice to hear the niche of electronic togetherness in a more polite way.

Turning it down was a good idea as W! Re comes and blasts the volumes right up again! And rightfully so as this extreme track needs to be discovered and experienced at a loud volume. The captured form of a seemingly hateful sound is violent and destructive as well as a devilish delight.

From the demonic ‘no escape’ we arrive at a supplied track by Toxic Chicken. I can’t write anything about it to avoid this review turning into a biased platform. But let me tell you that it is making the tracks that surround it come across even a sparkle louder and nastier than they actually are.

When the work of Humanhate666 runs amok through the audio equipment the whole place starts to shake. A whirlwind of harsh storm blows through the speakers but as it does it contains certain elements that makes my imagination think of mating cats in bad weather, rats squeaking in the ravage. But mostly it makes me think of a destructive tornado that might throw us into its inner-core for a free flight to the land of Oz..

Emaciated by curator, label owner and producer Emerge is the perfect track to play after our wild flight through mid-air. Our clothes maybe shred to pieces as we look up to see the rumble and left over view of the earlier destruction. Emerge takes us by the hand for a wandering walk between the stones, the wood and unidentifiable destroyed object. Is anybody out there? Are we alone? Are we the only surviving listener? Is there really a yellow road somewhere for us to follow? So many questions arise while Emerge doesn’t answer any of them except guide us with sound through this deserted world. Our footprints suck to the damp and wet floor while softly the dust begins to sparkle and a tiny bit of hope arrives at the horizon.

The tour ends up surprisingly to a strange character we have met before. It’s the mad sound magician Gerald Fiebig. Here he turns a arsenal of deconstructive disco into a collection of sounds. It is as if we have come full circle and ended where we have started the compilation.

The look on the panda’s face maybe your facial expression too when going through this compilation. It’s a wild ride this tenth episode, and you are invited to take it at the following link:
https://emerge.bandcamp.com/album/interposed
<KN>