Two artist for the price of one, better known as a ‘split’ that you are able to acquire with some money. But next to owning the following recording on a nice piece of vinyl, it is also available to hear with our very own ears and to watch at it at the same time. Either you can view the record turning around on the turntable after you have managed to get your hands on it, or you can watch and hear the two tracks for the price of nothing by watching the two accompanying video clips. 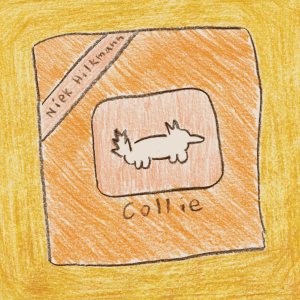 Niek Hilkmann, the pushing power behind the Dutch band with the playful name Yoshimi! Has this time chosen to release something under his own name? He laughs it off as ‘time to do something different’ and ‘surprising’, but I always think when someone start to release records under their born name, there will be a slight difference in content than a project name. In this special case and upon listening, I can only say that Niek Hilkmann is a more stripped down version of Yoshimi! And that the pair is almost interlocked with each other. Where Yoshimi! Has a full blown wonky toyfull group of colorful members, Niek Hilkmann simply captures the essence here without all the decorations, birthday hats and whistles. To me it feels at times if Niek is attempting to be the audio version of the cobra artwork spirit.

He sings a song that intends to give the listener the wrong impression, let us down of the road with an imaginative story about his dog and the twist that it ‘hurts’. To be honest the text is kind of cryptic, like it is written just after waking up from a strange dream and Niek Hilkmann has noted it all down quickly on his notepad that he kept under his pillow.

For our English speaking readers, this song will probably doesn’t make much sense at all, as it is sang in the native language of the Dutch. But for the Dutch themselves, I doubt that everyone can understand where this song is really about, other than giving a lucid dream the credits that it deserves by creating it as a song and pressing it on a touchable record. The video is basically visualizing every word that is sang so all foreigners can still enjoy and guess (just like people who can understand every word he sings) what this song is all about. Just take a look and study it, as it’s kind of a cute!

Niek Hilkmann’s song is just one side of the coin as the vinyl split can only exist by teaming up as a musical pair with another fun-tastic act. Where Niek was going more naked, more solo in his stripped down ‘collie’ song, the band that owns the holy name of ‘st Polaroid’ takes a fuller approach of goodness. St Polaroid might even broaden the interest in this vinyl outside the borders of the land of wooden shoes, windmills and cheese, as the song is delightfully done with a charming Dutch accent in the language that I’m attempting to write this review in. The song is written about a legendary swimmer called ‘Matthew Webb’, but can be applied to more romantic thoughts.

The song on itself has a large family appeal, as it comes across very pure, sweet and lovely. It has the playfulness elements combined in a more structural ‘everything is alright’ acoustic pop atmosphere. It is one of these songs that are strong in its softness and personally I wouldn’t mind to hear this multiple times per hour being broadcasted on the radio. It feels as a timeless work that could fit in with friendly hits from the late sixties and seventies, as well as the need for something authentic and friendly for the ears living in 2013 and beyond. In this time where most prominent music that is being pushed upon the youth is one full of decay of morals, soulless and without heart, this work by St Polaroid really feels as it comes as a blessing and a savior.

Every essential music instrument comes in the right place, beautiful waves accompanied by lovely hippy-esque backing vocals. The musical easy going approach really feels as a great relief, and the video of the song is just a confirmation that this St Polaroid is sincere. A video that captures the band in their natural habitat and element; dancing and playing in the Dutch dunes and on the beach. Filmed as if it’s a moving Polaroid just to give it the extra flavor of dream pop with sentiment. watch and hear the song and complimentary video over here:

The conclusion of this review is that this vinyl would probably a great family gift for all ages. The song delivered by Niek Hilkman will appeal more to the youngsters, odd-balls and dada-ist folk, while St Polaroid takes an more grown up position, without losing its inner child. To get this vinyl split you still should be a bit patient, as the pretty piece is planned to be released on 1 December through http://www.ycrrr.nl/ . Right on time to be bought as a gift for the festive season!
<KN>