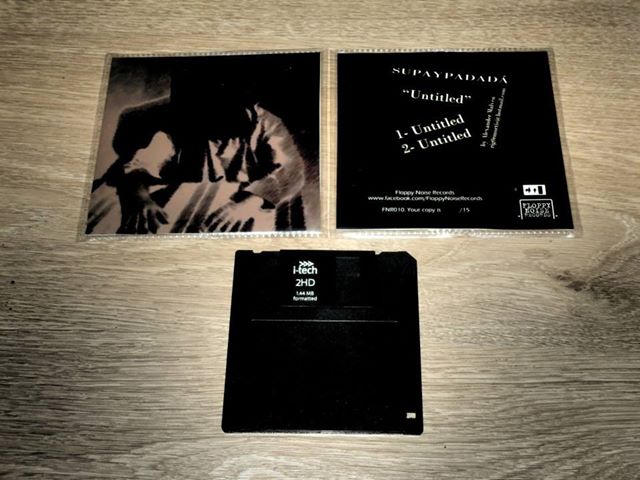 A new floppy diskette is out and about on the always exciting Floppy Noise records.
this one is by ‘Supaypadadá’ and contains two fanatic absurd tracks that you simply would have to hear for yourself as it’s one hell of pure craziness!
When you dive into this record unprepared you will be greatly surprised of the original wild insanity that has been captured over here. It’s if they had microphones in the recreational space of an out of control lunatic asylum! A delirious mad house where a bunch of people are on top of their raging energy and still attempting to get rid of the borders of their insanity! Absolutely crazy stuff but noise wise also very refreshing to hear such an original approach of the ultra raw and primitive black metal!  The beats are stomping, everything is crashing, everyone is going mentally berserk and the guitars are like lose canons!
If this was the music created by the patients at the asylum of one flew over the cuckoo’s nest, nurse Ratchet would certainly have suffered the fate of being hanged up side down and beaten in rapid speed with a broomstick. It’s that intense, that insane and it’s above all very freaking cool!
you can (and should!) get this floppy from it’s distributor over here:
http://www.depressiveillusions.com/items/floppy-diskettes/black-metal-pagan-metal-blackgaze/supaypadad%C3%A1-untitled
or contact Floppy Noise Records by email dir666 @ mail.ru with note ‘FNR’
<KN>