Christopher Alvarado And Jack Hertz – Revealing The Arcane (None) 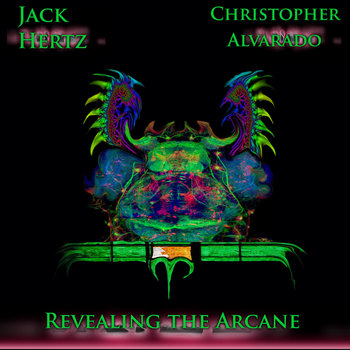 The album art for Revealing The Arcane by Christopher Alvarado and Jack Hertz depicts the elixir of… no, this is much too esoteric in its symbolism to even begin to describe here, or I’m lazy and full of shit, your pick.

Ah, didn’t mean to frighten you there, though maybe I did and I’m lying right now. I’m giving you all kinds of choices this evening! It’s like a choose-your-own-adventure! Welcome to a spooky new YIKIS review, by the way. A nightmare before xmas!

Probably not a nightmare, really, unless you don’t like scattered, erudite essays.

Gnosis: the common Greek noun for knowledge. In the context of the English language it generally refers to the word’s meaning within the spheres of Christian, Islamic, or Jewish mysticism, mystery religions, and Gnosticism where it signifies a “spiritual knowledge” or religion of knowledge, in the sense of mystical enlightenment or “insight”.

Occult: From the Latin word Occultus (clandestine, hidden, secret) is knowledge of the hidden.

Ventures like these tend to require a fitting soundtrack. The Aural Films label has proven itself pretty good at providing those! ‘Unchained Melody’ would have worked fine, too, I’m sure. This one, Christopher Alvarado and Jack Hertz’ album Revealing The Arcane, is as they describe:

“a dark sonic adventure into the unknown.”

The unknown, you say? What could possibly go wrong?

The album begins with a track titled ‘Corner Of A Dark Smile’. It’s very creepy… there are discordant strings, crushed drums echoing in the dark, eerie noises happening in the back of the mix. Eliade once wrote that “The manifestation of the sacred ontologically founds the world”, and that “In archaic and traditional societies, the surrounding world is conceived as a microcosm. At the limits of this closed world begins the domain of the unknown, of the formless. On this side there is ordered — because of inhabited and organized — space; on the other, outside this familiar space, there is the unknown and dangerous region of the demons, the ghosts, and the dead and foreigners.” The conception of the sacred establishes culture/cosmos within the confines of a space, among a people. What lies beyond is chaos, inhabited by the profane.

The next track, ‘Gall’, begins with harsh, nail-biting frequencies of feedback and rusty gates. An ill wind blows. Occasional bursts of distortion, perhaps of time and space, flicker through. “The imagination, like all things in time, is metamorphic. It is also rooted in a ground, a geography. The Latin word for the sacredness of a place is cultus, the dwelling of a god, the place where a rite is valid. Cultus becomes our word culture, not in the portentous sense it now has, but in a much humbler sense. For ancient people the sacred was the vernacular ordinariness of things: the hearth, primarily; the bed, the wall around the yard. The temple was too sacred to be entered. Washing the feet of a guest was as religious an act as sharing one’s meals with the gods.” [Guy Davenport] The sacred, then, to the religious mind whose existence stretches from humankind’s primordial age into modernity, is to be found in the conception of normality within any given sphere. Normal, as a mode, exists, though it’s critics are correct that it is mutable, possesses no universal applicability. It is the product of a culture, rooted in religious thought.

‘Lethal Kiss’ is another eerie, dark ambient piece, that feels like the tingling acoustic atmosphere of an unreal space; an unsettling organization of chaos. A whimpering voice sample is clipped up, panning. The chime of a time-distorted clock strikes. “Humans rally around ideas because they solve some of our problems, because they offer the biological blessings of the illusion of control, and because they are the threads that hold us together in the vast network of a superorganismic mind, weaving scattered individuals into a cooperative entity of awesome power and size.” For example, “Before the coming of the white man to the north, Eskimos believed that if they cut slabs of ice, organized them in a circle, formed a dome, and lived inside they would please the spirits. Apparently, the plan worked. The contented spirits made sure the Eskimos stayed warm even when the temperature dipped to forty below zero outside. Eventually, Western scientists showed up and tried to explain how the Eskimos had mastered an invisible force called thermodynamics. According to these presumptuous foreigners, the igloo’s tunnel-like entrance preheated outside air, the movable snow-block door let in precisely the amount of this air that could be further warmed by the seal-oil lamp inside, and the adjustable hole in the roof allowed just enough of the resulting rising currents out to create the convection that kept the whole thing going. The sturdy igloo builders pooh-poohed thermodynamic nonsense. They knew exactly what invisible powers kept their dwellings warm.” [Howard Bloom]

‘White Cell’ is next. I hear twisted dark reflections of sound in a pool of obsidian liquid. Strings fall like sour tears amidst groans of electronics and obscure sound effects. Very beautiful and harrowing. The ascriptions given to such persons who would topple the established rites, or who simply find themselves out of step with the culture, follow patterns familiar to anyone who’s ever witnessed first-hand the way groups communicate their considerations for a threatening oddity or abnormality. In large part, the order of the cosmos is maintained not only by its rites but by its juxtaposition with perceived chaos, including the turgid souls of soils either outside its confines or occasionally cropping up within, of individualistic, questioning persons; the secular, the profane, the iconoclastic, Demiurges… the different or eccentric or unusual. These persons are alienated and in some cultures persecuted, other times killed, or often banished, and take on the character of this outlying space.

The longest track on the album, ‘Vortex Of Forgotten Dreams’, begins with a sonic atmosphere of icy feedback and drones evolving like pads. Subtle skin percussion, congas and bongos it sounds like, enter the sound profile. The feedback feels organized into contagiously lovely chords. Then, noisy, cavernous percussive blasts come in for a moment, invading. It feels awhile after as if the mix has melted, then the liquidity of the mix thickens, bubbles, heats. Throughout are choirs of unimaginable form. As the cosmos grows, its borders expanding, it inevitably comes into contact with the peoples of other cultures making up the surrounding space of “chaos.” This can have varied results. War, imperialism, trade, multi-culturalism.

‘Aversion’ starts with a voice, spinning ecstatically into a void of beautiful unfolding harmonies and disharmonies. Beams of energy surround us in the mix, fluttering like birds. There is the punch of an electronic kick drum. It ends with the throbbing of space. “We need a geography of the imagination to understand the appearance and significance of cultural vernaculars beyond their origins. Such a geography would find among its concerns the continuity of culture into civilization, its transformation there, and the physiology of its integration. Anthropology has demonstrated for over a century now that cultures cohere in patterns of wholly imaginative assumptions about the world that constitute systems of law, kinship, language, and philosophy. Civilization when we are first aware of it accepts culture as its archaic moment, precisely when it has lost its feeling for that moment and can be critical of it.” [Guy Davenport]

Then, ‘Midnight Chrysalis’… this begins with sawtooth synth oscillators panning, a breakbeat coming slowly into focus, massive reverberations of rain drops as if we were a micro-being caught in a downpour. As the tones shift it begins to sound as if it were created by the unique modulations of a Synthi piece; it is very cosmic! “[…] the Greeks steadily continued to empty mythos of all religious and metaphysical value. Contrasted both with logos and, later, with historia, mythos came in the end to denote ‘what cannot really exist.’ On its side, Judaeo-Christianity put the stamp of ‘falsehood’ and ‘illusion’ on whatever was not justified or validated by the two Testaments.” [Eliade]

This is followed by ‘The Torture Lodge’, a return to a span of darkness in which a few sounds haunt an incredibly vast space. Wisps of night, bells, a downtempo groove shrouded in purple veil. A tiny synth lead careens overhead, joining in unity with the rhythm and the noise modulations. The religious, its cluster of memes, has not disappeared: its mind and myth continues alongside the secular in modern civilization, and while these may at first seem conflicted, representing a maintained cultural schism or dichotomy, the two are inextricably linked as one. “The fundamental codes of a culture – those governing its language, its schemas of perception, its exchanges, its techniques, its values, the hier­archy of its practices – establish for every man, from the very first, the empirical orders with which he will be dealing and within which he will be at home. At the other extremity of thought, there are the scientific theories or the philosophical interpretations which explain why order exists in general, what universal law it obeys, what principle can account for it, and why this particular order has been established and not some other. But between these two regions, so distant from one another, lies a domain which, even though its role is mainly an intermediary one, is nonetheless fundamental: it is more confused, more obscure, and prob­ably less easy to analyze. It is here that a culture, imperceptibly deviating from the empirical orders prescribed for it by its primary codes, instituting an initial separation from them, causes them to lose their original trans­parency, relinquishes its immediate and invisible powers, frees itself sufficiently to discover that these orders are perhaps not the only possible ones or the best ones; this culture then finds itself faced with the stark fact that there exists, below the level of its spontaneous orders, things that are in themselves capable of being ordered, that belong to a certain unspoken order; the fact, in short, that order exists. As though emanci­pating itself to some extent from its linguistic, perceptual, and practical grids, the culture superimposed on them another kind of grid which neutralized them, which by this superimposition both revealed and excluded them at the same time, so that the culture, by this very process, came face to face with order in its primary state. It is on the basis of this newly perceived order that the codes of language, perception, and prac­tice are criticized and rendered partially invalid. It is on the basis of this order, taken as a firm foundation, that general theories as to the ordering of things, and the interpretation that such an ordering involves, will be constructed. Thus, between the already ‘encoded’ eye and reflexive know­ledge there is a middle region which liberates order itself: it is here that it appears, according to the culture and the age in question, continuous and graduated or discontinuous and piecemeal, linked to space or constituted anew at each instant by the driving force of time, related to a series of variables or defined by separate systems of coherences, composed of re­semblances which are either successive or corresponding, organized around increasing differences, etc.” [Foucalt]

‘Revealing The Arcane’ ends the album with uneasy white noise, cavernous feedback. Swells of mana emerge and dissipate. The steely gears of progress are grinding away. The marriage of Protestant theology with capitalist political economy to a large degree dominates our current civilized discourse, determining the contours of our culture, its rites and customs, in contrast to the “chaos” laying outside it and subject to its rule from within. That both are assumptive is taken for granted; outlaying “cosmologies”, born from the methodology of science and reason are to be preferred.

This entry was posted in Uncategorized and tagged dark ambient, experimental, Soundtrack. Bookmark the permalink.