Crywank – Tomorrow Is Nearly Yesterday And Everyday Is Stupid 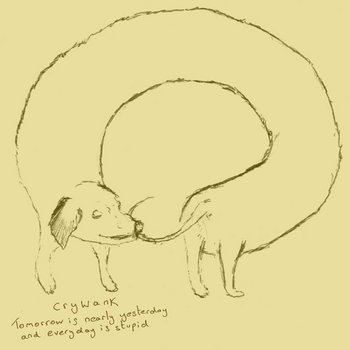 Anti-folk is a rather erratic genre. Its purveyors tend to fall into two camps: talented musicians and songwriters offering a fresh perspective on age-old acoustic arrangements and people who wanted to be musicians, but did not want to do all the work that comes with being a good musician. Before I listened to Crywank, a former solo project and now a duo of Manchester, UK’s James Clayton and Dan Watson, who boast the title of the worst-named band in the country, I did not know what to expect from their latest album. On one hand, the album’s title and cover are great; I love unnecessarily long titles and the cartoon dachshund circling around to bite its own tail is the most adorable take on an ouroboros I have ever seen. Also, this album has received quite a number of reviews (that I have not read, of course—do not want to taint my opinion), posted to its bandcamp and facebook pages, and a lot of digital reviewers tend to only review stuff they like, so that was another positive. I was hesitant for a bit, though, because the first sentence on Crywank’s facebook biography states: “I say I’m anti-folk inspired by punk and outsider music, if you want though you can just call me out as just some guy who can’t play guitar very well.” Oh no! Had my fears of being forced to sit through an album of someone banging out crappy phrases on a guitar and wailing nonsense into a microphone been realized? Thankfully, within mere seconds of opener “Memento Mori,” I knew Crywank belonged in the former group – Tomorrow Is Nearly Yesterday And Everyday Is Stupid is a strong, unique, and spirited collection.

As could be guessed by the album’s title, Tomorrow Is Nearly Yesterday And Everyday Is Stupid oozes negativity. Opener “Memento Mori” begins with a meditative, yet brisk acoustic guitar pattern and the line “Everyone I love is going to die, and I will die as well. I think about this before I sleep, and have since I was a child.” This creates a melancholy, confessional atmosphere that each song fully inhabits, but, thankfully, it never feels formulaic wherein all the tracks sound the same. Song titles like “Crywank Are Posers,” “Only Everyone Can Judge Me,” and “I Am Shit” make it quickly clear songwriter, guitarist, vocalist, and occasional dulcimerist James Clayton is the recipient of most of his own disapproval. Now, before any potential listeners write this off as some sad sack, tortured artist type complaining about all their first world problems, I have to say Mr. Clayton handles the self-loathing in an endearing, mostly-poetic fashion. He even addresses this point directly in the song “I Am Shit,” a driving tune with a playful mix of high- and lowbrow concepts. “Complain that I’m bored,” he sings, “but being bored is a privilege. Act like I’m suffering; there’s no suffering in this. First world problems, they breed in my head. (…)” Here, Clayton explores the additional embarrassment of depression in the developed world. This next sentence is not meant to downplay the real anguish felt in poverty-stricken parts of the globe, but sadness can have an extra sting for the globally-conscious Westerner, because they are aware of all their advantages, and it hurts all the more seeing those gifts squandered. It is painful to waste that potential, surrounded by all the grandeur one is not rising to meet. This struggle, born from the gap between one’s reality and possibility, is crucial to the material on Tomorrow Is Nearly Yesterday And Everyday Is Stupid. “I wait for something to change,” Clayton sings on “Notches,” “Maybe what should change is really me.” On the next song, “Crywank Are Posers,” the message is more direct: “I can try harder, I can be better, I can do more, but I know I won’t.” This exploration of missed opportunities gives the album a strong emotional core and an air of raw authenticity that I immediately picked up on and cannot get enough of.

The overall musical package Crywank offers is a simple and effective take on acoustic instrumentation. For someone who claims they cannot play guitar very well, Clayton certainly puts his limited chops to good use. On tracks like “Memento Mori,” “Crywank Are Posers,” “‘Who is Thomas Saunders and why is he significant in your writings?’,” and others, he fingerpicks repeated passages, striking a balance between a fast pace and dreamy sound. The notes wash over the listener, providing a good backdrop for the feelings to flow. Meanwhile, percussionist and backing vocalist Dan Watson creates incredible rhythms with what sounds like a bare-bones setup. They are brisk and technical, adding life to the songs, imbuing them with a slight playful edge, and keeping the material from becoming a complete melancholy exercise. What works so well for the duo is that they skirt that pity party line very closely, but never fully dive over the edge. The songs are brief, the longest just over four minutes and most of them clocking in at less than three, so it never feels like trekking through thick jungles of negativity, but more of a long, leisurely walk. Similar to the possibilities James Clayton struggles with throughout the album, there are so many instances when this collection could have taken a wrong turn, but instead it traveled a direct, even-handed path that fully explores self-doubt without ever getting bogged down by it.

This entry was posted in Uncategorized and tagged Anti-Folk, Sadcore. Bookmark the permalink.