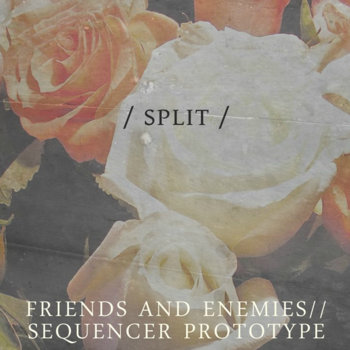 After my latest review covering a single produced by a band with the curious name of ‘Friends and enemies’, the hunger for more was rumbling in my stomach! The hunger for more doesn’t happen often, but when it does rumble it simply doesn’t take ‘no’ for an answer! Lucky the music demanding stomach can be fed through the ears with a following split that is done between this band and one with the name ‘Sequencer Prototype’. Both band names score high in the world book of odd band names, which makes them rather a perfect team on paper.

Music wise these two bands are not only compatible but come across as two acts shouldn’t be non separate-able. Their tunes go hand in hand as if they are not just brothers sharing the same release, but fun loving musical twins. Both of them cover compact songs that aren’t wasting time pieces and would fit an easy spot on an alternative radio station. Their lo-fi approach will probably sound even better through the ether waves than through the digital highway, but don’t let that stop you enjoying it in any shape or form you ought to get your hands on it.

The split start of with the hit track ‘Frenemies’ by Friends and Enemies. I can write a long story about it, but that has been already done in that previous review that was simply focussing on this track alone as a single. If you have the appetite for it than you might click ‘here‘ for that little review.

Sequencer Prototype is the one that takes over with a song called ‘Hawaii’. It takes our ears in their vision of the place of coconuts and happy hola hooping. For one minute and fifty-five seconds the music blast some happiness and for some strange reason it makes me feel like opening a can of beer and start some kind of party while spotting an ugly shirt with palm tree’s on it. Perhaps a pair of pink sunglasses will top of the perfect look for this short lived tropical party.

Than it’s time for my stomach to finally still it’s hunger! A to my ears new tune by Friend and Enemies pops in!  It is called Apocalypso and is sounding as fresh as the roses on the cover artwork of this split! It’s the music to swing your hips too with more of that ‘stoner’ surfer rock feel that the ‘Frenemies’ single had captured so perfectly. But ”Apocalypso’ sounds more energetic, upbeat and festive than the work that gathered my hunger. The voice of the singer is not to be heard in this track which also might have helped to lift the spirit up!

This lifting up of the spirit is most needed as Sequencer Prototype shoots their ‘Sequences’ at us with the soft touch of an alternative adolescent dinosaur. It’s something that hits the face so unexpectedly that even though you will have plenty of time to think about what just happened, it simply keeps on face slapping with surprises! Everything is wild, unpredictable and destructive  with still keeping an raw energetic vibe that can’t be killed. Believe me or not but there is even grunting involved!

Blasted and flabbergasted the split directs towards  the last track that is just as fine and bewildering as the one that my brain just tried to capture for your enjoyment. The song is called ‘Love vs Oxygene’ and shows Friends and Enemies far away from the chilled out friendly surf stoner rock genre. Here they are sounding like they can turn anyone into a piece of raw meat on their little barbecue that writes anything bad or critical about their precious music. So I will definitely refrain from basing, trashing and any other form of negativity and praise this split into the great sky of guitar based bands instant classiness!
Interested? Than this link might help you out;
http://myrdalmx.tumblr.com/post/60340750932/split
<KN>