Attic Ted – So It Goes 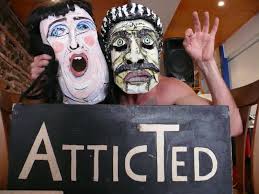 Attic Ted is coming over to the best kept secret in Tiburg: Gifgrond, the Netherlands.
His name is in neon letters on the front gate, sprayed all over the outside walls of the venue in anticipation of his official visit from deep Texas in the Americana!
Gifgrond is ready, the toxic green carpet has been rolled out all the way to central station (just in case Attic Ted get lost on its way, which would be a disastrous scenario..)
Flags are waving, balloons are pumped up and even though the day of his performance is still at least two weeks away, the inhabitants of this venue are so excited that they wake themselves up with screams of joy when ‘Attic Ted’ make pre appearances in their dreams.

The message is spreading, the printed and televised press is working around the clock featuring articles about Attic Ted visiting the country of tulips and special made Attic Ted Kroket! You can feel the heath of the artist arrival even among the communities that normally do not care about alternative forms of music.
Attic Ted is expected to turn up and perform on the 14th of June 2014 and now already cart board cut-outs resembling Attic Ted have been spotted around and in the town that is warming up for this grand entertainer feet to settle among the wooden clogs of the Dutch people.

Some small businesses and marketeers have smelled their changes and are selling special ‘Attic Ted’ socks under the table, mugs and plates and even tea-spoons with the face of ‘Attic Ted’ have also been seen going around from consuming consumer into collector’s collections.
The hype of this American artist coming to perform in the Netherlands is of such a grotesque importance that even the Prime Minister had offered to call the 14th of June’ national Attic Ted day!

In the Netherlands everyone knows his hit ‘ And so it goes’ as it has been playing nonstop all over the radio stations, and the state owned television channels have been featuring the accompanied video at least 2 times in a hour. But in case you are far removed and unaware of the hype of this artist with his fancy theatrical weirdo pop with saucy fine organ loops and other rambling uniqueness,
you might want to check out THE video and THE hit song.. If you aren’t in the Netherlands, you still have 2 weeks to get yourself into that country, down to Gifgrond to watch and hear the event and happening of the year!

Attic Ted will for sure please and fulfill the excitement with its multiple personalities and performance capabilities! Sometimes it isn’t bad to believe the hype, and this is certainly the case of this artistic phenomenon of the one and only Attic Ted!
Here is Attic Ted’s hit video:

and if you want more Attic Ted than you can possible dream off,
than please check out the official Attic Ted sound cloud:
https://soundcloud.com/atticted
<KN>

1 Response to Attic Ted – So It Goes