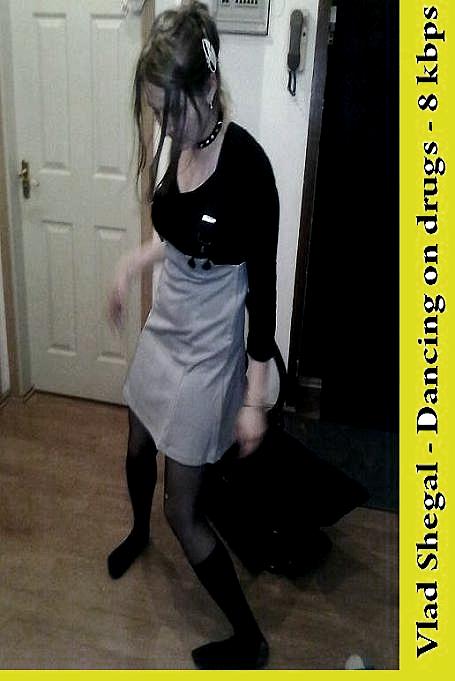 No carpet, no sand or stones. No laminated floors or wood.
Let’s dance on top of drugs!
Vlad Shegal is ready for it, and got some tunes to get our grooves on.
Of course everything is in the extreme lobit range of the 8kbps sound,
which is good for health and safty purposes;
while stepping around on a floor entirely made up of all kinds of drugs.

The record starts with the track called ‘baby elephant’ which is a name that is probably linked to how we must feel at this extreme lobit dance session.
A little bit like an overweight humpty dumpty trying to balance on the pills, the bags of green, the towers of powder while avoiding the sharp end of needles.

With ‘Bunny’ we feel more like a hopping soppy bunny,
who finally has found a safe place to jump.
The stuff under our fluffy paws must be powder anyway.

Than a moment of pecking enters the release. This is the moment to be and feel like a lobit loving chicken. We can wiggle our tale, picking things up that we like from the stuff that we are walking on. Be careful not to swallow things you don’t trust as it might affect your balance and ultimately your dancing moves.

the next best thing as feeling and walking around attempting to dance as a lobit loving chicken, is doing the ‘pickaninny’. It’s still all very careful stepping’s wise. We are still scared to destroy some of the objects that we use as a floor for the occasion. Besides it might happen that the things we picked up with our beaks contained a few acid drops, which makes moving a bit like walking on balloons anyway.

I think the moment has now come where we can embrace our fearless ness. Here we can hear the track ‘proboscis’ do its job. We can step to the lobit sounds and acid like pig farts. This party is a strange one that’s for sure!

And it might even get stranger when Vlad Shegal serves another soundtrack for this f*ckedup moment. It’s called ‘teddy-bear’ and is perhaps named after not being able to dance more as we are now at a point that we just all want to lay down with the other extreme lobit party poopers and hug and cuddle for the loving data loveless vibes.

The last track is for the left over active party people again. A little tempo and more acid farting pig sounds. Yeah I Know This might suck, but I’ll love it anyway! Join the 8kbps lobit party and avoid the needles!
https://archive.org/details/VladShegal-DancingOnDrugs-8Kbps