Ak’chamel, the giver of illness – My Form Has Been Extinguised 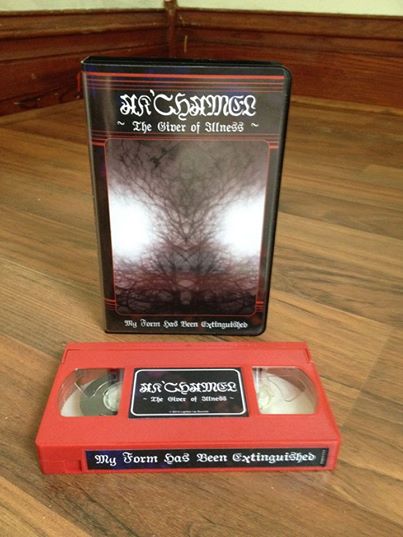 If you are willing to bargain chunks of your soul, Ak’chamel will sell them to the Earth-Lord. They are the ‘Giver of Illness’, here to bring you blindness, cancer, and organ-failure by way of the sound-sorcerer.

My ears had met Ak’chamel before and through my ears their music went straight into my mind giving me twisted visions that started to pop open like popcorn that turns around in a paper bag in an active microwave.
I remember listening to these givers of illness without doing any research about them, and by doing that I could see them dressed in robes doing strange rituals that involved music and things that cannot easily be classified.

Afterwards when looking around for a bit more information on this band it’s very clear that my imagination triggered by their music wasn’t just some bullcrap but actually closer to reality than my brain was thinking at the time. To make a long story a little bit longer; I believe that this was the moment that I thought that Ak’chamel had managed to infiltrate my mind and could project themselves all the way inside my soul, munching on it as if it were a baked potato. In other words I felt that this band was different, powerful, magical but not in the fairy way..
I decided to be a supporter, love them dearly and click like wherever they would pop up on the digital highway.

I might have been giving some kind of infection, some kind of illness that turned me into a fan-boy of this Ak’chamel band, but as there is no cure to be found; I’ll keep on cheering like a brainless zombie if there is anything in sight that comes out of this band’s hands. And so it happens today that I woke up, checked the interwebs and then suddenly run out naked in the streets yelling as if the house was on fire!

It wasn’t the yells of panic.. this was the scream of joy and excitement that came out all the way back from my rusty vocal chords. The band that ate my soul, my favorite band in the world; they are releasing!! They are releasing a VHS video tape!! The whole neighborhood knows about it now, and it will probably not be all too long before my neighbors will also be servants of the Ak’chamel band buying all their products and cheering everything they do. This band has the power; this is the band that has the medicine to give us blindness and organ failure! You bet your ass that we lick their magical asses together once they are done with you!

So uh, yes. Ak’chamel’s latest news is that they will soon be out to see and spread their sound, word and power through the magnificent format of a pretty VHS tape! Oh yes, the neighbors know about that one too! I screamed VHS as loud as my throat could deliver.. Luckily I live in a country where we still have VHS players so it might happen that the release of this new material will be probably be sold out in no-time. I mean if everyone is so excited about this band as me, we are going in for a big fight over who gets that tape and who not!

But for non-infected people, here is an excerpt from the soon to be released Ak’chamel VHS tape:

Okay, I’m sure you are now infected. It won’t be long that you can feel that glare of the Ak’chamel eye burning in your liver and spreading the fanclub disease all over your body. Soon you will be sweaty and typing like me and fastforward the news of this VHS tape arrival of Ak’chamel all over the place! Spreading it like a disease to your family and friends and even unknown people you bother on social media.. Yes, Ak’chamel has got you in their pocket now! You want proof? Click the following video:

Yeah that’s right.. It isn’t your own free will that wanted you to click and watch that video. It’s Ak’chamel’s magical dark powers that made you do it! Welcome as you now are to join the fan base of the Ak’chamel band until there is nothing left of that internal potato of yours! Ak’chamel wants you to go to the label that will provide this limited edition release on VHS and beg them to release it as soon as possible, because we are dying (literally!) if we can’t get our hands on this visual / sound footage of our now most favorite band in the entire occultist universe!

Here is the label (it’s not out, but if you push them they will have no choice than to hurry up with it!)
await the VHS tape of Ak’chamel, giver of illness over at the following link:
http://lightenupsounds.blogspot.com/
or if you need more of their sounds while you await more sickness:
http://akchamel.bandcamp.com/
<KN>