Can Can Heads – Butter Life

Posted on September 8, 2014 by kainobuko

We all like Can Can girls; armed with glitter and glamour & plenty of colored ostrich feathers they sure are a glorious sight to see. But what about this band named Can Can Heads? They don’t seem to have an interest in glitter, glamour and (the ostrich would be relieved) colored feathers. They write that they are inspired by violent music; which basically can be anything; From Violently Happy by the elf-like Björk, to Justin Bieber spitting (rather musically) on a fan’s head. But for some reason I’m not really sure that these two examples are the kind of things that inspired the Can Can Heads. Personally I believe they are more inspired by listening to the activity of bird like creatures fighting over bread in a park…

Does it really matter for this review what inspired these Can Can Heads? Nope, I don’t think it matters the slightest bit. But it’s always good to get some kind of discussion rolling, especially when we know so little about this band and it helps to make this text more longer; which at the end makes this blog look more impressive.

But to go a little bit further down the ultimate bullshit lane: I would like to know how this band came up with their name. Why the ‘Can Can Heads’? Is it a question perhaps? Can can heads? I would say ‘Yes together the cans can’. I have a feeling that the Can Can Heads are probably referring to emptying so many beer cans in their heads that they saw everything double.

When opening the Can Can Heads promo email I had the feeling that I saw them double too; but then I found out that I was remembering their name from a contest-poll over at the Weirdest Band In The World webspace and had some kind of a brain malfunction. For people who aren’t in the know; Weirdest Band In The World does these monthly contest polls in which people (or robots) can vote for a band that they think is pretty weird. Did they send them perhaps the same promo mail with the goal to become weirdo of the month? If not: they might trigger some inspiring violence? Imagine the Can Can Heads opening two cans of collected violence and slaying the other bands that people can vote on at the poll so to make sure they will be weirdest band of the month; that would be pretty weird, right?!

Speculations and thoughts of the Can Can Heads might be a bit too chatty in this post, so perhaps let’s get back to the facts and write something about this band’s latest release. An LP named ‘Butter Life’ , a title that highlights the bands violent sources of inspiration. It consists of 19 tracks, all reasonably short minus one named ‘Great Depression’ which has the great play-length of at least 7 minutes. But before falling in that period of time, there are other tracks to explore. If you are not half dead by now you might want to continue reading the official YIKIS track by track review that will start now: (or perhaps skip it and just click the link below to hear it all with your own ears.) 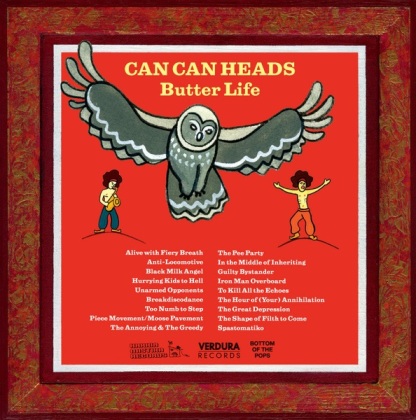 The album starts with ‘Alive with fiery breath’, an instant impression of gooses, ducks and other water birds that are having a wild chattering conversation about something important like ‘who owns the lake’ seems to go completely out of control by these feathery participants. It’s a illustrious fight in the pecking order and the Can Can Heads seem to have brought in some drum kits that the ducks, gooses and other water birds use to beat each-other with to hopefully get some sense in their skulls.

In ‘Anti-locomotive’ we can first hear the Can Can Heads performing as if they are a locomotive. It misses the ‘choo ‘choo’ sound to make it realer than real, but if you can dismiss that; it’s a pretty locomotive that has some problems with sliding over the rails.

‘black milk angel’ is like listening to funky bees that have a little party to celebrate the new expansion of honey. In the end they become drunk or just mysteriously fall down out of the sky. It might Trigger many new social media pages full of outrage and calls to protect the bees.

In the ‘Hurrying kids to Hell’ the Can Can Heads express the hectic mornings of a parents life with kids that needs by social norm to be brought to the brainwash center that is ‘school’. The parents scream and shout, pack the children their lunch-boxes & say ‘don’t get along with strangers’ as the hectic hellish morning moment ruins every Monday to Friday.

‘Unarmed opponents’ is like listening to a spastic fight of instruments being played by these Can Can Heads as if they can slip out any moment some ‘toxic fumes’ coming out of their instrumental buttocks: they hold them tightly squeezed although the instruments can’t be stopped twirking about. In this poisoned fight there are no winners.

‘Than it’s time for ‘Breakdiscodance’ that is like a nervous breakdown after eating extreme hot and spicy food. You like it but end up with an ass on fire.

‘Too numb to step’ is another nice track by these Can Can Heads. It’s a bit like a locomotive of funk with rusty screws that even though they claim to be too numb; is a easy step-able track to showcase your drunk footwork on. Al Bundy would be proud.

‘Piece movement/Moose pavement’ is like a mad marriage of manic menaced dancing. Something that works well with a funny walk and popping swinging hips and a breakup from insanity before even ever exchanging the wedding rings.

A better fitting title than ‘The annoying & the greedy’ is probably not possible for the track of this name. But the thing is that this theme makes it look cool to be annoying and greedy. It’s the track for ruthless bankers with nerdy side trades that need their own ‘theme’ just to become a little bit more like Luke Skywalker’s father when he walked in the room. Its less dramatic and probably more punk; but still a form of instant ego-enrichment.

‘The pee party’ is like this mysterious bathroom music that you can hear in toilet locations inside hotels, restaurants and upper-class shopping centers but than with Can Can Heads in the cubicles playing their thing on top of it. Pissing never sounded so enriched with the right soundtrack playing.

‘In the middle of inheriting’ is a very short tune that smells of excitement and looking forward (and quite possibly imaginative spending) to getting something that formerly belonged to someone else and had now successfully passed away.

The next tune is ‘Guilty bystander’ which sounds like a little fight and a goose with a big mouth standing around it and only heating the Heath up by using a big mouth.

‘Iron man overboard’ is nice and bombastic and perhaps a bit crunchy. The locomotive is in full speed now and reliefs itself from a cloudy puff of steam as it rolls down the hill. No need to hit the break as the thing will hit the right asylum build on top of the railroad down below.

‘To kill all the echoes’ is perhaps the closest at being a violent track. Everything is rambling. It’s a burst that goes by in a instant.

‘The hour of (your) annihilation’ is like going to a gospel church with the Can Can Heads telling us that the end is near in a expression of anger, sentiment and destiny. It’s the first track featuring clear vocals and it’s almost like a holy experience.

‘Than it’s time for this lengthy track The great depression’. It’s one of those tracks that you need to sit down for, give yourself a glass of booze and think ‘what a wonderful world it is that we live in’. The Can Can Heads rumble and do their best to kill their instruments in a suicidal attempt and it’s advised to stay calm in order not to give into the feeling of jumping from a balcony because the music made you ‘fly’. Pretty heavy material as you can hear some of the gooses being in pain as the music tortures their tiny holes that are presumable their bird-ears.

‘The shape of filth to come’ is more wild expression and features more vocals. It is compared to the Great Depression pretty light and dada style. It is gone before you can flush the toilet.

Lucky ‘Spastomatiko’ takes over which is like listening to the Can Can Heads doing what they do best; using their spastic movements to create a music that goes from a rusty dual featuring a duck into a rolling well-oiled train.

‘Salmonella river (Päntäzumba remix by JS666) is the last track on the album and is compared to the 18 tracks a odd duck. A remix of a Salmonella River’ that is probably done with the help of a computer as it sounds so squeaky clean and tight. It’s like listening to a deejay after seeing a wicked performance of these Can Can Heads.

So Can Can Heads? Yes, most definitely! And would they make a chance to win the honor to be Weirdest band of the month over at Weirdest Band in the World? Sure they do! They don’t even need to result in violence to get rid of the other contesters, although they might want to check their backs for angry water-birds and rusty oiled-up locomotives.
Get ‘Butter Life’ by these Can Can Heads at the following link:
http://cancanheads.bandcamp.com/album/butter-life
<KN>

2 Responses to Can Can Heads – Butter Life