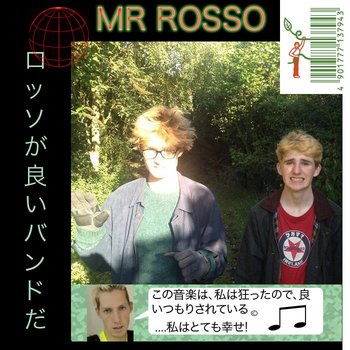 Were called Mr rosso and were from dublin in ireland, where no one at all listens to this type of music. Maybe youll like it!

These words came to us though the digital post and became the trigger to listen to the suggested album that Mr Rosso included in the email. With great enthusiasm my personal unpaid assistant clicked the link and another one gave me a neck massage. The third unpaid employee came in with a tray of my favorite Jamaican beer and thanks to all the pleasant vibes on the work floor the right atmosphere for writing a positive review had been setup. The one that had clicked the link opened up the volume at a reasonable temperature and read the title from the screen before hitting the play button.

‘Colin Farel’ he said as I made myself a little bit more comfortable in the fauteuil while the other assistant started to massage my ears to make them all relaxed and flexible. The other unpaid employee opened a beer bottle and placed it to my mouth so I could sip it all down as the music was coming out of the speakers. My nose sniffed up the smell of quality beer and the odor of the relaxed music hiding under the name of this ‘Colin Farel’. My nose wiggled up and down and my ears received every note of chill with great appreciation. This Mr Rosso was a good choice to hear at this moment of the day. A fine Lo-fi feeling of funky cool and reasonably chilled (just like the beer) funk guitar and drums started to rock out more and more. I told the ear massaging assistant to do ‘no more’ and moved my head like a wild little tiger in the tempo of this pleasant cocktail of good vibes.

Another beer was being opened and emptied in my mouth so it’s content could slide down my throat to join the one that had gone before. The assistant who had clicked the link before informed with a grotesque voice the next title of the song that would come out next. ‘Heart Break’ he said as the song started to come out of the speakers. The previous neck and ear massaging assistant now started to massage my feet, it tickled a bit but after all these assistants are not getting paid so I shouldn’t complain all too much. Mr Rosso played and played and when my ears received a trumpet and then a classy energetic form of ‘getting funky’ my fingers snapped along and I smiled while mumbling ‘life is good.. And oh my gosh I Love trumpets!’.. The assistant who had just informed the name of the track smiled too and with a pleasure in his voice he announced the next track.

‘Moon Woman’ he said as the music started to play. I told the foot massaging assistant to do ‘no more’ and if she could arrange some cigarettes to smoke. She went out straight away in search for smokes and me and the two left over unpaid assistants started to break out of our formality as I invited them on top of the fauteuil for jump dancing. The Jamaican beer is strong enough to make every official work day into a little party as I gave the assistants the order to also grab a beer for themselves. It was fun to jump on the fauteuil with the three of us and the ‘Moon Woman’ playing loudly to bring the happy nonchalant good vibrations. This Mr Rosso is good fun and sounded more real than our little situation of dancing reviewer and unpaid assistants engaging in a little jump session. After two minutes of fun the music had abruptly stopped, the three of us fall down on the fauteuil and the bossy boss inside of me asked to the assistant who had been responsible for the music ‘to check it out’. He informed me that the track was supposed to be like this and asked if he should play it again or go on to the next?
Of course we as a professional reviewing business had no time to listen and dance to the same song again, so he announced the next one.

It’s really short he warned. It’s called ‘Home run’. The music came and for as long as it lasted the three of us all relaxed while playing air guitar along with the actual music of this band from Dublin. Ah, it was short but perfect’ my beer supplying assistant said when giving me another bottle to drink. I couldn’t agree more and ticked our bottles together as if being good friends.

The assistant who had been searching for smokes came back with a pack of electric cigarettes. It was not what I wanted, but as we had a good time over here I didn’t want to be mean and thought that it would be a good time to check this high tech shit out. All four of us received a electronic cigarette and boy what a bullshit it was. Huff in and puffing but no smoke comes out and only a little red light lights up. Disappointed in the modern world and technology I put the electronic cigarette in the trashcan and went back to the Jamaican quality beer.
So what’s next? The assistant close to the computer screen checked and announced the next song.

‘Introspective interlude’ he said. I asked if it would be another short one, but he answered that it was the opposite. A nice length of at least four minutes of pleasure with a relaxed cool flair of Mr Rosso. Just when I felt like holding hands with my assistants the music dropped down for a shimmering breakdown. The hands touched each-other and fingers interlocked and when the song went up again with pleasant singing, lovely swinging beat and friendly guitar we all started to swing around like a little commune of brothers and sisters who had all come together to make this review possible. It was a lovable time and wish the song would have never ended.

The song stopped and the hands lost touch as the assistant jumped enthusiastically to the screen to read the next tune title. ‘This is not a game (there are no winners)’ he said quite loud as the music was already playing before any nods of approval. But the nod was not necessary as we all rocked out on this the sick beats, a swinging organ and the wicked sing talk hip hop words from the lyrics that came out in the music. This is pretty good stuff right? All three assistants agreed as they had now all indulged in emptying beer bottles and some still kissing their electronic cigarettes while dancing their young butts all around the normally strict and tidy office space.

‘Chrystal Fairy’ the assistant shouted now obviously jolly and tipsy. The music started to play and it was real and pleasant. There was some real singing, great rolling drums and even some unexpected organ for a bit. A real pleasure to hear as we all enjoyed a little party.

I don’t know if the tracks are getting shorter or that the beers make it less easy to concentrate and make good times going so fast, but before realizing the track had gone as the assistant brawled out another track title. ‘Mr President’ he said. And the track became like a ball of bombastic eruptions before going for a more speedy flow of energy. A mix and match of energy and calm temper but got mostly a really a great feeling from it. It’s like happy punk that you feel like singing along with. Just when I wanted to sing “whooohoo’ the music came to an end, making way for another song.

‘Home Alone’ the assistant said. And this was a pleasant track with a more relaxing atmosphere, quite lengthy even which invited a serious good time for drinking the final left over beer bottle contents and swing a bit like a party moment when everyone is intoxicated enough to feel warm and cuddly. The vocalist sound like a warm friend, the music brings good times and I long forgot that we were here together to seriously review an album and not for a lovable party among friends whose names I don’t even know. The assistants got active in dancing and showed off their skills for strange intoxicated body moves. Thanks to the music of Mr Rosso it was a good time for all four of us.

The swinging continued and I had to check the title for myself (it was ‘Get Clean!’) when the last track jumped in. The assistants danced and me too! It was like a party and everyone was happy. No more assistant work and boss-assistants relationship but just one brew of dancing, clapping and smiling bunch of equality. Get Mr Rosso’s Doom On Denton and see what kind if result it will have on your environment by checking it out at the following link:
https://buttholetv.bandcamp.com/album/doom-on-denton
<KN>