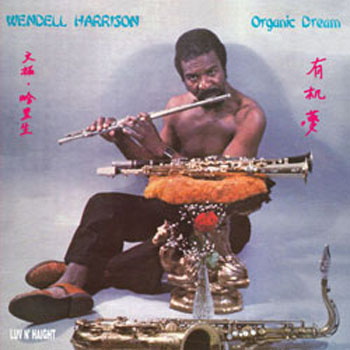 Yes, I would climb any mountain if I knew, upon reaching the summit, I would be greeted with the scene featured in the album art for Wendell Harrison’s Organic Dream and the accompanying flautistry. From now on I’m not climbing any more mountains unless I’ve got a sax, or a bongo at least.

As many of you know, or suspect, I listen to a lot of music. I’ve been listening to what I here describe as “a lot of music” for a lot of years now, too. As a teenager, my tastes were shaped by a number of artists, labels, compilations, genres. Of these variety of things, a label called Ubiquity also had a large role, in particular with two compilations they’d released in their Audio Alchemy series from the late ’90s: (Experiments In Beat Reconstruction) and (Directions In Sound Manipulation) and… I’ve just remembered that I’m on the internet, so I can show you these… 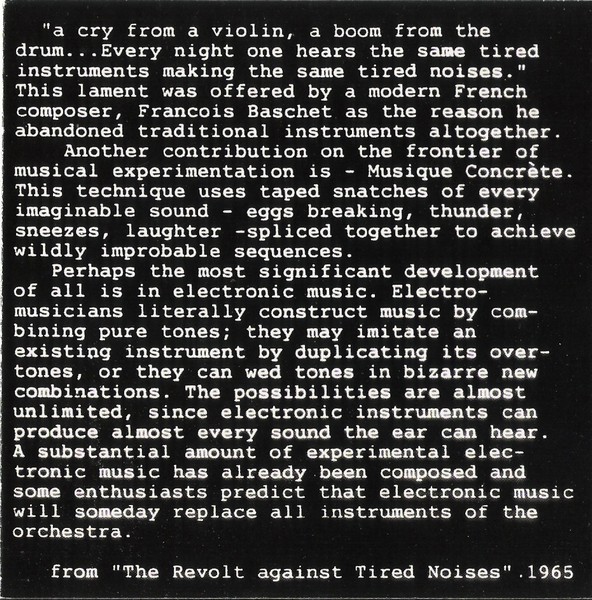 … they were very Downtempo, featuring Breakbeat sketches, sampling, that familiar dusty vinyl record sizzle warming up the background. They formed in my psyche an impression that experimentation in musical form is not merely a realm of endless industrial-grade noise and caterwauling, but is also a realm populated with the interesting and attractive possibilities inherent in the exploration of locked grooves, polyrhythmic percussion and the clever manipulation of wax. My aesthetic taste, then, found its foremost expression going from this to the funkier side of Industrial and synth musics laid out by groups like Tackhead, 23 Skidoo, Mark Stewart, ACR, the Funky Alternatives Compilations and such. Things that were generally more uptempo, of course, but whatever, I’m not trying to build a perfect bridge here. Even among the more Downtempo, rhythm-based vibe like on these comps there were things that felt essentially vital and yet were lost in the last couple decades of primarily Teuton-beat EBM and Industrial. Goth/Industrial rivethead kids really need to listen to more Afrobeat!

Anyway, I was very pleased when I found out, some months ago, that Ubiquity had established a base at Bandcamp. I became excited all the more when I realized they were not only releasing compilations of new artists, but were re-releasing very old, oft-forgotten classics for collectors… like this gem! The world of underground music is vast, and stretches backward through time into many eras. I’d spent a few minutes, hours, going through their page listening to things when I stumbled across this, and judging from the album art alone — which is pure magic and you should go back up the page to look at it again — I knew I’d be in for a treat.

As it turns out, I was not incorrect! In other words, I was correct! Since I’d been wanting to talk about some older music on here for awhile, I figure this is a perfect opportunity. So, let us step into the mystical world of Organic Dreams!

It begins with ‘Ginseng Love’, which right away makes me want to brew some herbal tea and maybe chill in a hot spring for a bit. Well, until the music starts, with some serious drums, bursts of slap bass. When the flute comes in, I’m back in the spring. There’s a bit of choir, strange electronic noises chirping in my left ear. Psychedelic… this music creates a space of imagination in which there is a respite from the cold, the dreary and bleak… it’s like we’re all rich in spirit, chatting with each other about our life’s works over French-pressed coffee, hanging out in saunas and jacuzzis in some really fantastic and luxurious place that doesn’t exist for any of us in real life. “Love, peace & serenity!”

Next is ‘Winter’. I wasn’t ready for it, figuratively, but it’s nice… piano, shaken bells, clarinet. If this is of any wintry character, it’s that of sitting in a musty, wood-faceted cabin, roasting logs, wearing thick sweaters while someone plays a piano and staring outside through the window at the falling snow, accompanied by friends and nice people, but mostly being left in quiet contemplation of life. At some point after the four minute-mark, the mood lightens and I’m reminded of times with my father in the garage of the old house listening to Jazz records, and memories of sledding in the snow down the hill across our street that used to belong to nobody, before they built large houses there and we weren’t allowed to go any more. What is the measure of a life? Cocoa… the music also reminds me of drinking hot cocoa.

Then it’s ‘Love Juice’! I’ve heard this one before. Very Funky, with solid 4/4 Disco feel that makes it danceable. This is a real fun one! Music to move to.

‘Peace Of Mind’ is lovely, soulful, then gets into more uptempo dance territory. This is just great… you’ll find yourself feeling better in no time.

After that is ‘The Wok’, which is a vessel in which much great food is often cooked! Right at the beginning, it sparkles. The piano’s like soft rain from the skies, the groove is tight and funky. Gotta love the flute… or is that a synth lead? Hard to tell in places. Maybe it’s a saxophone, even sounds like it has the harmonic tone of a trumpet occasionally, no doubt a quirk of the recording and/or my method of listening at this moment, as well as it being almost five o’clock in the morning at present. I’m staying up super early just to talk about this. Doesn’t matter, I don’t have to be up until two pm. The music is all-consuming, and totally magical.

This album ends with ‘A Green Meadow’… what’s more magical than that? Nothing. It begins with faint strings. Some bell tones ring out, some saxophone. Toms, bass, cymbal splashes… it all coalesces into a nice Funky Jazz thing. Yeah, I hear that guiro… and the claves. It’s a nice closing piece, on which you may find yourself floating off to pastures of the imagination and elsewhere.

Despite my beginning with an entreaty from the 1960s, leaning toward the progressive abandonment of the traditional musical forms (inasmuch as they are even truly “traditional”) and the expressions of highly familiar instruments, I find that the human mind sometimes finds satisfaction in returning on occasion to these traditionally beloved sounds… like a nice vacation home, without the baggage. I feel very strongly, too, that there are undoubtedly a large number of ways in which such sounds have and can continue to be made exciting and appealing without feeling anything like a retreat, if only by contrast with our modern habits of forgetting how to genuinely enjoy them again for what they are. Just raw and human. Funny how both the re-print of this album and that re-print of the Musique Concretist missive comes from the same place… Ubiquity Records. Anyway, here’s that link, and be sure to listen to it in a hot tub at some point. Or just imagine yourself in one, that works too.