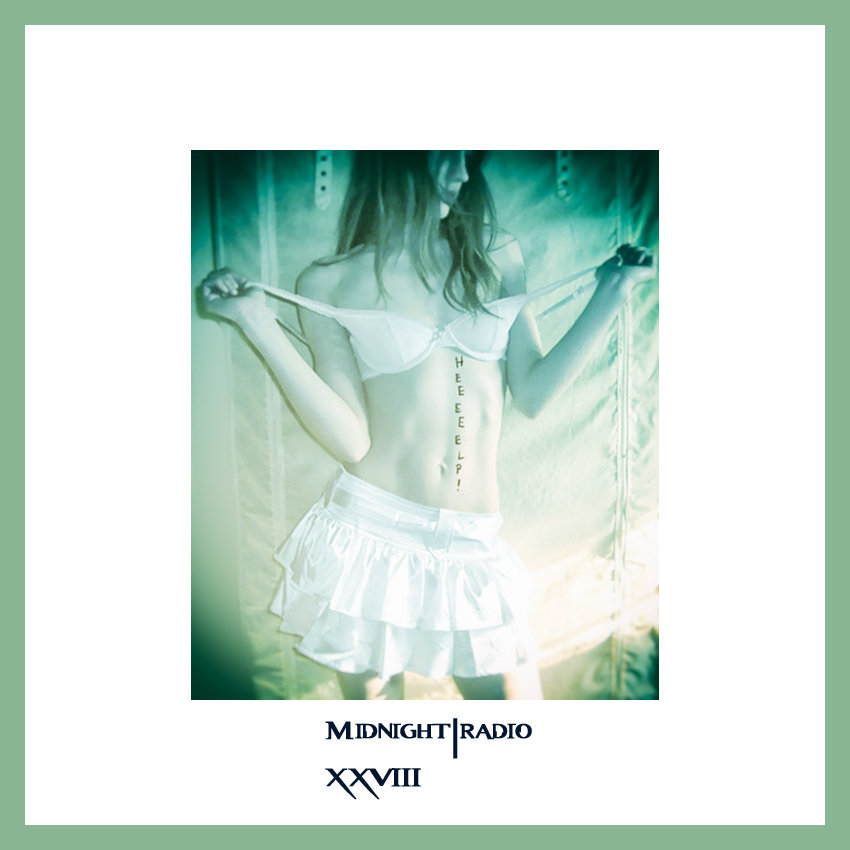 Cousin Silas is a bit of a underground Rockstar but than you should replace the rock with ‘ambient’. Ambientstar sounds a bit like a new kind of lizard with a sparkling skin, so let’s keep it at Rockstar without the actual rock. the legacy of everyone’s favorite cousin has reach a huge audience, enjoyed by many and still managing to keep both his feet on the ground. One on the underground and one above, high enough to have his own spot on Wikipedia. He teams up with a fellow named Kevin Lyon which is a name I searched on Wikipedia but had no conclusive results. Their track on this massive Midnight radio is like entering a realm of time in which time simply stands still or has no meaning. It’s a calm ambient track with depth that exhales mysterious sounding fog that at times get a friendly glow, but at most times is hiding in the realms of darkness.

But unlike the next artist (Verjault) Cousin Silas and Kevin Lyon kept their work quite gentle and elegant. Verjault’s work is like a chainsaw of flames that works hard to saw off your ears, (one by one) and than perhaps just goes for the listeners neck. Of course it isn’t violent enough to indeed chop our heads and ears off, but it does exceeds the gentleman protocol of asking before letting the industrial claws attack. Nonetheless this scare attack is quite effective and for its time being worked well as a eye opener in which I only hope none of the weaker listeners will suffer from a sudden hard attack or indeed loss of ears.

Than its time for ‘The Ambiguity’ who shimmers away with a track titled ‘On Death’. It mixes a lonely slightly glitched conversation with oneself about death with very soft slight ambient tones. It functions a bit in my opinion as a introduction to the more musical ambiance done by a project named ‘Strange Meat’. It is like listening to the music that fits strange lightening effects up the sky.

Bloody Blue comes with a special midnight radio edition of ‘Bloody Water’ a really nice track that has this pleasant bass guitar and electric solo jams that feels indeed like the perfect music to be heard in the middle of the night. Really relaxing, perfect for midnight-drives and midnight thoughts.

A very awesome track in the relaxing department is the one dropped here within this compilation by Red Clouds. It’s like a soothing pillow full of feathers for your head, a bedspread warm and comfortable of pure soft pleasant audio. Abstract perhaps, but absolutely worth to follow when you are on the way to dreamland or perhaps just ‘relax-land’.

In case you have been now so relaxed and you are semi-dreaming you will have great chance to meet up with a classical piano pop robot from the future. But don’t be alarmed its a absolute friendly one as the music that it (Elektroklänge) provides is like massage oil for your ears. A good match with the pleasant game of audio pinball by Øystein Jørgensen. An artist who smoothly provides a easy going rhythm with soft elements that will probably relax the listener even further.

InterStella Moonbeam brings a arousing form of midnight music that for some reason makes me think of ‘massage’ parlors in certain parts which has something taboo over it as the music also seemed to have an Arabic feeling over it.

More relaxing and perhaps even aiming for a top spot at the beauty contest in the category of atmospheric ambient is this very lengthy but comforting music work by Phrozenlight. It’s at times watery, and other times like a religious opening of something supernatural. In all ways the sonic journey that is delivered over here is something that should be enough to keep the listener intrigued and calm.

Dragon Hawkmoth & The Moongeezers are bringing a piece of tripped out spacesynth rock to the collection. It’s the music that would suit dancing snakes and fakirs as well as other more relaxing scenes. It gets taken over by Rauchgemeinschaft Merck 05 who comes with electronicly driven rhythm and some muscular whispers in the depth. The track opens up slightly like a pandora’s box revealing a slight psychedelic world.

Reskimus’s recognition is another pleasant calming piece of ambient music. It gives me the feeling of listening to fluffy clouds in a non disturbing day. A perfect fit for the work by Ulrich Harmssen &Agnus Dei. A track that brings ambient seemingly through the hallways of a monastery.

EXEDO blows the harsher version of ambient through the ears and in case of this compilation it is like a breath of fresh air. A hot flaming scene that even though is dressed as noise is to my ears quite a relaxing appearance that form stormy warm storms of a metallic allure.

From here its time for ‘Des Alb’ who gives us ‘a little warm hand’. Title wise this sounds quite perverted (or is it just me?) but music wise its like friendly non disturbing electronic music that has a happy feeling sliding through it.

Emmanuele Gattuso brings a soft indie stoner song which comes across as a nice personal touch that slows life down a few steps to slightly fit the pace of the track by Recodierte Einheit. It’s a work named ‘Terra Blue (Additional Live – Mix for Terra Green)’ which is a track that is like listening to a story without words. There are chapters, different takes of music, exciting moments, more relaxed times and a certain exoticism. Very nice and trip worthy!

Time for a little bit of comedy playtime made by Playman54. It’s like slow motion slippery rope skipping with a bouncing floor and plastic walls. To celebrate the lighter side of this compilation its good to hear Fiesta Bizarra’s Fiesta Bizarra! It’s like active bizarre rock with a jolly tempo that fits humans dressed as horses and exciting singers dressed as chickens! Farm house rock for the mentally liberated!

To get a grip back on our serious selves a track by DK grabs us gently by the neck and drags us in a stoney moment of music that is a good hang out to take some rest or a break for recreational intake of whatever that rows your boat.

This episode of the Midnight Radio is one of the more relaxing ones that my ears have come across. From a few exceptional pieces, most of the found tracks are really easy to listen with a pretty flow and mood. One that takes this even over the edge of relaxness is the one provided by I a mirror. It’s really soft and fragile in sound, but absolutely perfect in formula. Just apply it to your ears and you will feel instantly at ease. It slowly opens up like a curtain to simply make your day into one that is one of joy. A true highlight if you’d ask me.

CH33’s track has a strange combination of coming across as being retro but yet down from the dubstep era. It has this theme that could fit a cop movie featuring the Eddie Murphy from the eighties.

The music by West Remi is in a personal fight with I a mirror’s track at who is the most prettiest in my opinion. It’s a very beautiful and melodic piece that has some sentimental feeling about it. I think it’s a lovely piece that could be described as the warm touch of the sun melting frozen hearts with ease.

When you simply think its impossible to have more beautiful relaxing ambient tracks 44’s Delusion comes up. It has this easy melody that is being played from the heart which you can easily hear as it somehow sounds emotional but in a non dramatic way.

Tuner Gorodezkii feat. Ivan SANDaCOW bring an interesting experimental electric soundscape to this collection. It feels like they had recorded things and manipulated the sounds into a deep progression that would be perfect to be enjoyed while being in a state of dreaming. Halfway when some sounds are becoming more louder and apparent it would have probably great effects on the dreams with loop hole adventures.

More sexy and relaxing is the production of ‘La MiniTK del Miedo’ who bring a deep sensual slow electronic track that sounds like a slow pop with a relaxed train-like rhythm and organic melodies that have a uplifting flying feeling over it. It’s the music you want to hear after winning a golden medal, or just went through a personal victory.

A different mood and more in the indie corner of haunting space rock comes within the track brought by a band named ‘intouch’. It’s dark but also empowering with great singing skills, industrial elements that made me think of nine inch nails from the old days and a bit of retro gary numan with their own additives.

SEMPER AETERNUS comes with a track named ‘eternal drums’ which refers not to the drums of an actual drumkit in this case, but more of the electronic programmed ones. There is a nice atmospheric warm track build around them that has a childlike innocence with additional grown up drone to make it all sound more deep, which works quite well. The melody is lovely and the crisper beat programming works up memories of the IDM era without going too much for a demand to dancing. A warm floatation piece of music, really.

the last track is half an hour long ,made by tamayurakurage and is an synthetic psychedelic ambient work featuring electric versions of birds and a tampura. A really nice ending that probably seals the deal of all listeners being completely calm and at peace. This compilation was like an audio massage of relatedness and unlike the doctor; its completely free to download!
You can do this over at the following link:
https://midnightradio-compilation.bandcamp.com/album/midnight-radio-compilation-28
or alternatively:
https://archive.org/details/MidnightRadioCompilationVariousArtists28
<KN>