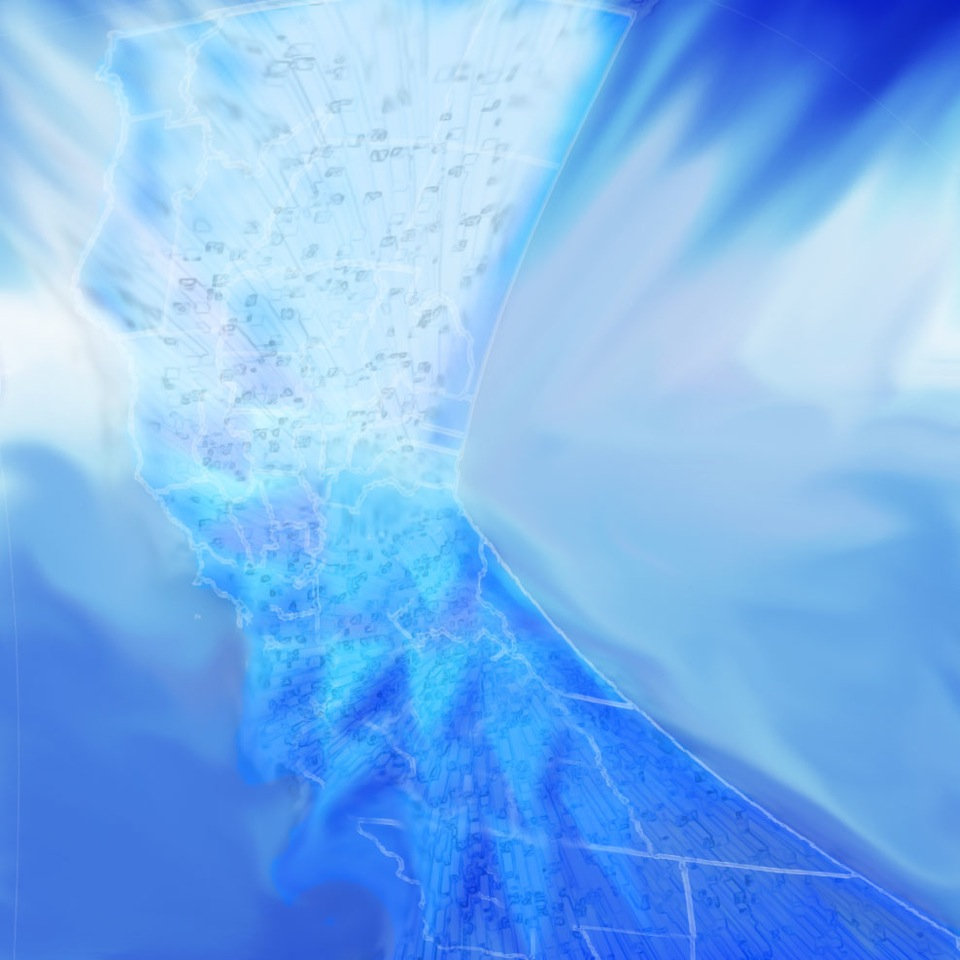 Darren Francis, Jason Oliver & Alessa Otto are the three responsible characters making experimental music together under the name of ‘Logos’. The trio started back in 2010 and just dropped their fourth album named ‘Santa susana blues’ which is a title that might trick some close minded viewers into thinking that it’s a blues album, but we at Yeah I Know It Sucks can gladly report to you that it’s not three blokes on a guitar doing the blues. In fact for his album darren Francis left the other two behind and does this one all by himself.

also worth mentioning is that ‘logos’ is proud to let us all know that they don’t use instruments in their work; it’s all digital. Perhaps this happens a lot in modern day music land but I found it rather original as it’s a specific tool in the concept of the sound of ‘logos’. No analog fetish or sentimental drooling on a bongo or guitar is allowed over here which comes to me over as a if the group stands on a small island with their middle fingers raised to all seduction of touchable music instruments and analogue pushers of the millennia.

I’m glad ‘logos’ exists as they fully embrace the digital age with a form of proudness and respect that you don’t easily come across. So what do these fellows make music wise if it isn’t digital blues? They themselves describe it as ‘uneasy listening’ and ‘industrial psychedelia’ which doesn’t mention the digital aspect of it all, but perhaps that’s the trick of the trade.
But for now it’s back to ‘Darren Francis’ doing the fourth Logos album all by himself without the buddies.

The album begins with the main title track ‘Santa Susana blues’ which strangely (for a digital work) starts with a fieldrecording of nature in the night. Underneath the sound of crickets a mid size feeling of indeed industrial ambient seems to have flown in at an easy pace. It’s coming across as a stretched loop that halfway gets a encounter with the opposite sex that feels much higher and gives the recording a bit of a golden flavor.

This looped gold is being smoothened up with slight special effect and a additional layer of tone that makes it all sound more like a gigantic golden butterfly with a beauty big enough to make the listener forget about the fieldrecording and the lower industrial part of the beginning. It’s not even wings flapping; but just pure focus on the colors and the patterns as the butterfly of sound sits still for you to adore it. Perhaps it is indeed flying around in your imagination to make this event eve even more magical, as the music does (with the applied special effects) give the pretty digital ambient tones the feeling of movement.

The next track is ‘come to now’ which might be a bit of a oddity that goes for spoken word that is so manipulated with a whole arrangement of effects that it’s definitely not clear what is being said in general and have to be absorbed as music as a whole with voices as the tool of instrument.

The same goes for ‘when rivers ran upside down’ that feels as a different take with a very different outcome. In fact it comes across as if the Darren francis from ‘Logos’ is trying to bring the sounds of the nightlife fieldrecording but than without the actual recording but with recycled voice samples so manipulated that it indeed sounds like nature, even a small river stream and a bird like rhythm seemed to be brought out of the digital emulation process. Coyotenoia sounds like that from the beginning but halfway gets a different form of sound that grabs the attention of the ears of the interested. It’s very soft and deep which might go by without registration, but it’s recommended registration material.

‘Something witchy’ is like listening on loop to a miniature with on a broomstick talking in a cat language to a black cat. It’s speeded up as if it’s been recorded on a cassette tape and than being recorded digitally to fit the statement. I think it’s called ‘something witchy’ because hearing it on repeat there is a great success in hearing additional music things that aren’t actually in the recording. In fact after rechecking the album the with, the black cat and the broomstick had left giving me a real ‘bewitched’ moment.

Then it’s time for ‘the devil’s business’ which sounds title wise perhaps flames, fire and endless suffering of the devil’s customers, but in reality the music is non confrontational, rather sweet and light that goes by without any reason for listeners to feel the Heath or scream.

Twenty five years in the tombs you made’ is another title that might possibly be viewed as a gatekeeper of darkness, but the music is like a harmless sparkle of sound. Multiple tiny fractions of those sparkles actually. It must be said reviewers wise that in my opinion the titles of Hesse tracks do not really seem to correspond with each other, or perhaps it does but I can’t know about it as it’s difficult to know how it would sound to be in someone’s made tombs for 25 years..

The track named ‘hungry knife’ (I can’t possibly know how a hungry knife would sound like) is a strange presentation of warm but dark sounding drone ambient with additional eerie ness by having a little choir of children sing softly in the ears. It makes me feel slightly uncomfortable as if being in the mind of a butcher thinking about chopping up some innocent youngsters.

The ‘last door’ sounds like a rather relaxed Darren Francis who first whistles a bit like a well confident handyman that than soon gets to work on experimental sound. It’s a bit like listening to a happy DIY man soldering and fixing us some light ambient.

The music is definitely fixed as the last track named ‘infinite soul’ takes our ears on a lengthy journey of relaxing journey of experimental ambient music. At times its a bit ghostly, but warm and at other times its more like the cover artwork; a bit vague with blue and light blurs for a fine relaxing form of adventures chilling. In the end we end up with
the original ending of seagulls and the digital sound of the waves of the sea. You can hear the whole ‘santa susana blues over at the following link:
https://logosnexus.bandcamp.com/album/santa-susana-blues
<KN>

This entry was posted in ambient, audio collage, chill out, drone, electronic, experimental. Bookmark the permalink.