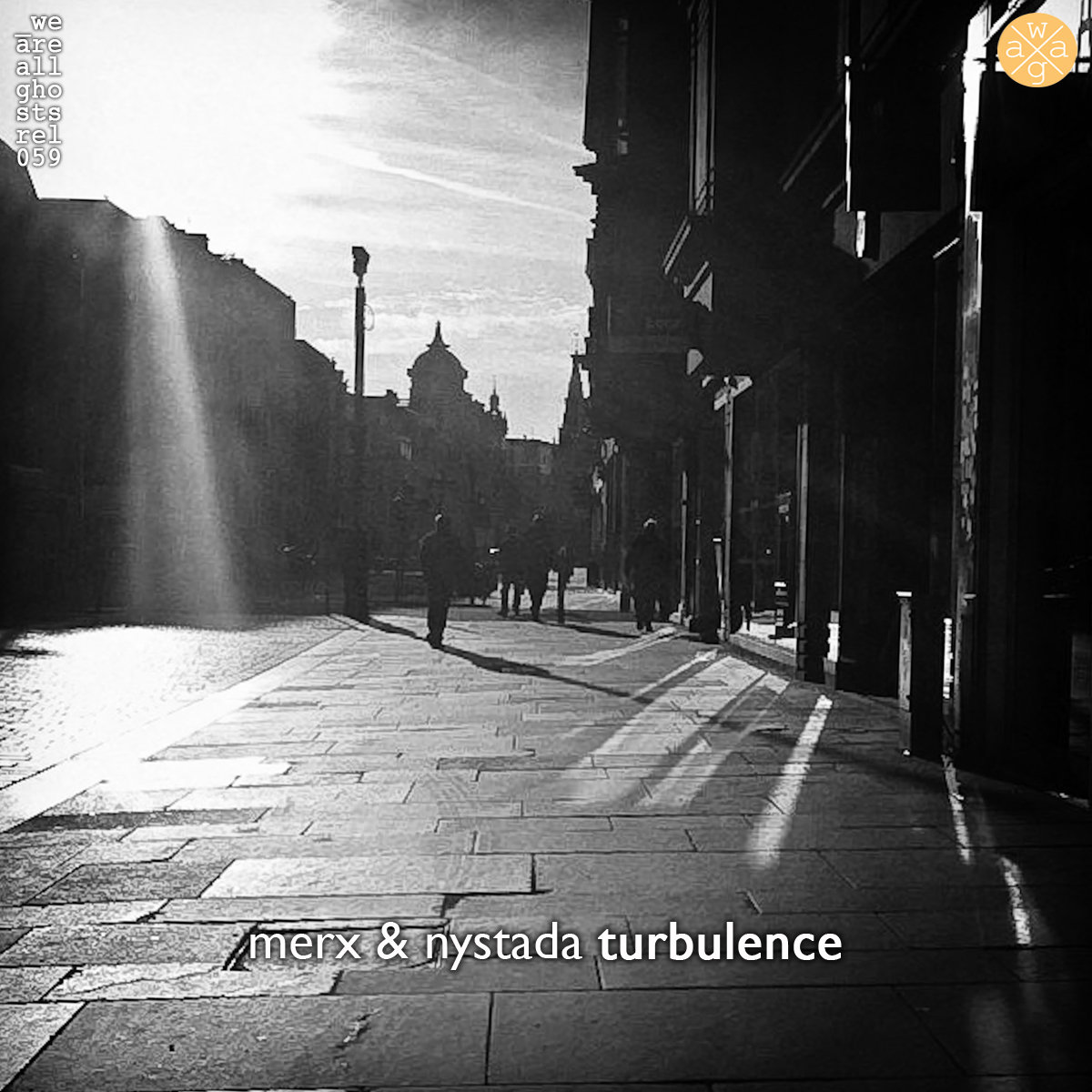 mere & nystada joined each other to work together on a release, 7 tracks came out of it and they are bundled under the name of ‘Turbulence’. The kabel owner of ‘the weareallghost’ netlabel wrote that it was at the beginning a ;challenging listen’ but that it had grown on him.. This might be also applied to other new fresh listeners, so keep it in mind that this release might need multiple plays for the right adjustment of mind to fully appreciate the content of it all. After all; it’s a real electronica pearl!

Urbanität is the first successtory of music collaboration between the two artists that came here out of the speakers like a plastic fantastic electronica track. The first thing that my mind thought when hearing this, is how fresh and friendly it sounds. You can hear a steady lightweight rhythmic synthetic melody that has something of a very bright feeling over it. It made me see it as if it was made of a plastic material but colored in bright purple , blue, red or neon yellow. The sound visualizes itself when it steps along, bringing pleasure and a certain snoozy smoothness with it. A strong and yet light weight opening that is quite a contrast with the next following track.

This one is named ‘Malfunction’ and is more vague, more experimental in its feeling. The movement and visual sight of bright colored plastic-music is completely gone as this track works more like a world of wonder in which a  downtempo element is guiding its way through it. Spacious but slightly dark deep undertones are waving throughout the work like fireflies that trigger a much more brighter side of this in general shimmering synthscape. To me it felt like listening to a blue night in which tiny micro miracles could happen, while stepping away through the abstract grounds of ambient.

‘Motorik’ goes for a high-hat that functions as the path to follow so you won’t get lost in this work by these two artists. Electronic fuzziness buzzes like singing baselines that come to life to join the scene as more solo kind of material. When this happens the high-hats already teamed up with the other elements to form a swinging beat for the melody to bounce around in. From here the music starts to take shape as if it’s free basing synth rock that showcases multiple effects and synthesis that turns the sound from spacious to somewhat raw around the edges. It’s like a 2 day unshaven chin from a male figure.. In the end you will find yourself as a listener alone on the high-hat clicking your red shoes in the hope for more happenings..

‘Halbdunkel’ is perhaps the answer to your prayers. That is of course if you had been praying for a track named ‘halbdunkel’ which might be (on second thought) quite unlikely. It’s a slow kind of swinging track, it has bright synth tones, while a more drunken rhythm softly riddles underneath it. It’s a bit like soothing electric raindrops that come down with enough warmth captured on top while bright smoothness shaves the previous unshaven chin.

Hold on tight, fasten your seat belts as now it’s time to go through some ‘turbulenz’ . It’s one of those happenings that you expect to be a bumpy ride; but the actual turbulenz is so light that it’s no big deal for the thrill seekers under us and more something that goes by without the risk of being in the danger zone of falling air hostesses tumbling on top of your lap. It sounds more cute, vibrant and actually as the sweetest turbulenz ever recorded. Even when the work goes more in front, the electric sounds are keeping themselves of the good kind. The simply softly freaking their way about; making it a perfect track for psychonauts to be all happy and smiley.

Than the friendly fellows come up with a work named ‘Untergrund’ which is really an nice and deep sounding synth work that fits the mood of the release its front cover. Although perhaps slightly a bit grimmer than the actual mood on the photograph.. It has a smooth melody that might come across as a bit sinister, but how its brought with its stepping rhythm made me feel as if it’s the soundtrack for a Freddy Kruger moment in which the listener takes the satisfying part of actually being Freddy in search for a fresh victim down in Elm street. Or perhaps another street.. Not that it sounds scary or nightmarish, but it sounds powerful in a villain kind of way.. I’m loving this track too much!

The last track ‘Sorcerer’ is one that seems to use the finest nervous acid wobbles as the fancy undercoat and feeds the listener a turbulent solo synth-melody while pretty high ambient tones smoothly rinses the ears with a sweet glow of sunlight generating kind of sound. It’s a positive ending that has the pulse of a exciting heartbeat, one that hopefully beats enough to generate more music being made in the future by this remarkable duo.
Play it a few times, let it grow on you and unlock its beauty in its full glory:
https://weareallghosts.bandcamp.com/album/turbulence-waag-rel059