The Wok – Golgotha with Zanussi 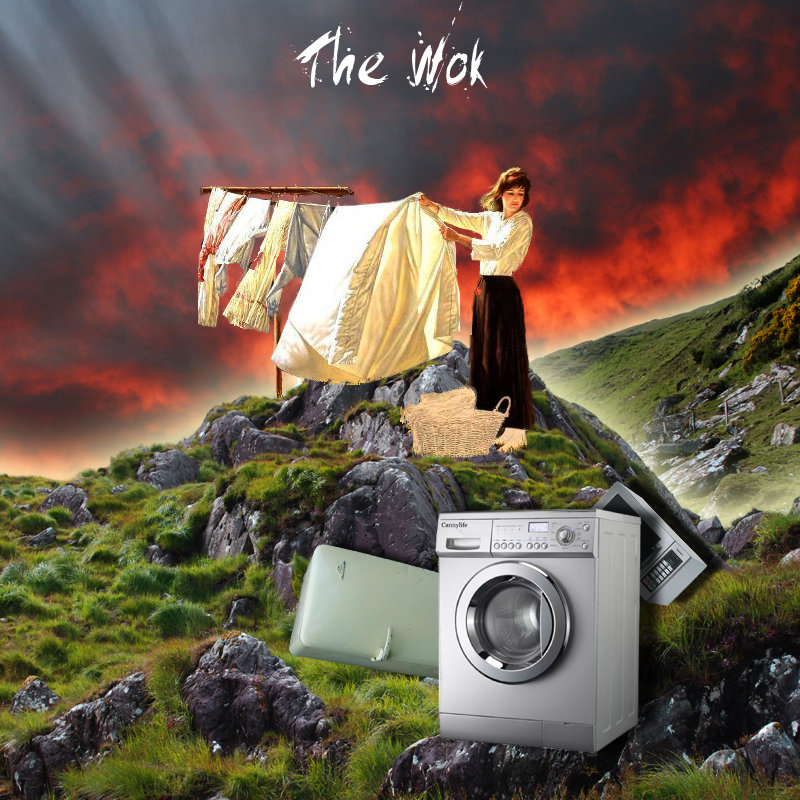 The Wok is back and improved! Listening to ‘Gogotha with Zanussi makes your clothes smell nicer than ever and the odor is one of rosemary, classic detergent and anti allergic softener. A lovely but still a bit damp kind of melody will make this process f cleanness one of a pleasant but grotesque kind. It’s really the perfect track for hanging up the wash on the clothesline while the weather just went through the transition of being dry after a fine rainfall.

The music of success is more coming apparent with the next work named ‘Grasp & Acquisition’, it has this eighties feeling which brings back delicious memories of mullets and over done electric guitar rockers with colorful bandanas in the long flocks of hair. It is the music that a relaxed Rocky Balboa would like to hear when running up and down the stairs in preparation of a fight he doesn’t really need to practice too hard for as we all know he is the one whose going to win. Take it easy Rocky!

then follows ‘Two-Piece Suite’ which really evolves on a nice piece of ambient mainly invoked by a piano melody. Half way the track transforms and drops the piano out of sight to open up a Indian vibe that creates a nice break for brains to travel on a flying carpet of relaxed glory.

This carpet brings us successfully to a track named ‘Heaven on a Stick’ which is even more pleasant for the ears and (why not?) for the entire human body. It’s a bass guitar and a electric guitar that are most responsible for the happiness over here as the track slowly but surely progressed into something that wants to make us listeners to feel good.

It isn’t a figment of the imagination that this music is melodically so evolved that it just simply knows how to pleases foreign ears with its great mix of melodic synth wave Indian eighties ambient chill vibe.  It made me think of that movie with Peter Sellers in which he says something about ‘birdy nam nam’.. I think it’s the movie named ‘The Party’…

Than the album by The Wok continues with a more slow rock themed anthem named ‘Show Me Your Pyramids’. I’m not sure if you too had the feeling that ‘pyramids’ would stand for something dirty, but music wise it’s a mysterious and thematic melodic piece that has some kind of darker feeling over it. This might explain that this is the part that the album indeed is going into darker directions. The following work ‘Hellrunner’ is not a very happy track either. It shimmers in its darkness, as if it is made under the ground and rumbles under the feet like a patient volcano that wants to let you know its there, but will not burst any time soon..

With a work named ‘Godhead’ the darkness comes out to shine, but this time it manifest itself in a dance and groove work my ears appreciate and react to it by heavy wobbling of the toes on the toms provided rhythm. Even the ambient score that makes an appearance on top can’t stop the wobbling and when the acid fueled baseline wiggles nicely it’s hard to sit still and type word that people can read. It’s a track to chill and dance at the same time; a combination that can only be achieved while listening to this track by The Wok..

…It might help if you are into classic eighties rock as The Wok seems to be a professional in this field. A very musical one with enough knowledge of other things to make it not only bare able but also quite the pleasant listen. I say this because rock isn’t my kind of thing, but how The Wok rocks is absolutely of the wicked good kind. It makes me excited to hear these electric riffs launching the ‘Brain Damage Medley’ into outer realms of greatness. The voices that appear make the track more closer and humanoid; this is not made by a computer or a melodic super computer; but by a human with enough talent to make a non rocker enjoying the lovers rock. The nice angelic space synths on top is a perfect tool to gather more pleasant flying than without.

After the ‘Brain Damage Medley’ its extremely nice to be able to listen to ‘Sunset Raga’ which goes back to the psychedelia Indian atmosphere and comes across as a perfect track to compliment the sun while candles with a favorable smell are burning their lives away. A mystic pleasant ordeal that you should enjoy as long as its there, as after this The Wok launches us straight into the dark depths of the sound of Hell. ‘Hellrunner (II)’ is much more active than ‘Hellrunner’ and could be a good track for the Halloween. But for its darkness in sound, it is still in the zones of atmospheric ambient that has no visual appearances of real monsters or ghosts, but does have the ability to create some kind of creepiness..

The last track is ‘Cliff Face’ which is a ambient track that hangs a bit between this dark and light theme. It’s the middle and gives you as a listener the option to leave this album by The Wok by turning yourself into the light or indeed go for a nice ride in the darkness of Hell for some fine running around the flames..

Conclusion? A really nice melodic (almost orchestral!) album that seems to go from fresh odor of just washed clothes, to psychedelia and eighties rock, to the shimmering side of hell and back into the sun.. A lot of themes in one, but surprisingly all the tracks sounds very together!
If you are into melody and mullets you won’t be disappointed when clicking the following link:
https://thewok.bandcamp.com/album/golgotha-with-zanussi