The latest release on one of the cuter labels out there ‘Wrieuw Recordings’ is a reminder how quick the time passes. The label has started one year ago with a split by Rainbow Valley and ‘table music meeting’ and now one year later they came back as a reunion. This time ‘Rainbow Valley’ comes in under his moniker of ‘Little Penguin’ which is explainable in a easy way.

The two projects both took a song from each other and managed to cover it as if it was one of their own songs. ‘table music meeting’ simply went for a track by Little Penguin instead of one made by Rainbow Valley, and that’s why (probably) why we are dealing here with Little Penguin and not Rainbow Valley doing a cover of a original ‘table music meeting’ work named ‘日々’.

Is anyone already confused, or is it all still understandable? If you forget the concept and the whole idea of them covering each other, it will probably save the reader and listener a lot of head scratching and mind boggling.
Both tracks stand strong on their own legs and in their own shoes with borrowed laces. table music meeting’s version of Little Penguin’s ‘Polaris does really bring out the cuteness of the song by making the electronic side become more hand played, strategic and different in atmosphere.

In the beginning it had me checking the chimney for a sign of Santa Claus, or perhaps some early snowflakes. The shaker that can be heard is just so interlinked with the time of the year that people call Christmas that this reaction would probably expands on other listeners who lay down their ears to hear this work. 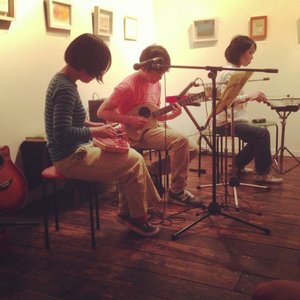 You can hear Toshiyuki, Maki and Naho giving the melodic elements of the original; a mini toy orchestra treatment, done with a lot of dignity. Critic wise I feel that its done with so much respect for the original, that it has lost a bit of the sentimental feeling of the original track. For hand played music it’s super tight which makes me want to loosen the belt a bit for more relaxedness. That being said, ‘Polaris’ as heard here on its own; is a fine listen especially if you imagine the trio playing it over and over again to get it right, until over perfection.. If you liked Little Penguin’s ‘Polaris’ from the album Chromosphere than this feels like a complete bonus re-discovery of this very same track. 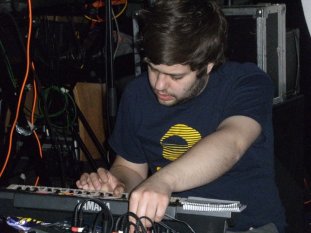 The Little Penguin version of the ‘table music meeting’ original track named ‘日々’ goes for that moment of relief and relaxed atmosphere that was needed. Little Penguin works with electronic created music but does chose its sounds as if they are organic and living.
The way it is performed with these warm synthetic tones are intensive and deep, creating an almost orchestral masterpiece created by the wings of this  little penguin. The original melody is played in an sweet and emotional way that makes me want to hug the pleasant warm bass and the lovely high notes that bring the anthem. Absolutely wonderful!

All in all ‘table music meeting’ and ‘Little Penguin’ really honored each other here within this cute and lovely split. And it’s up to you to honor your own ears by clicking the link below and let the music do its magic:
http://wrieuwrecordings.bandcamp.com/album/covers
<KN>