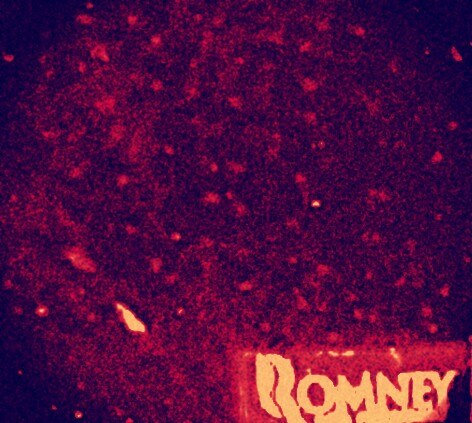 This release by RAEPUSBARABUS is coming across visually as something perhaps pretty violent. Everything is written in capitals and the informative line that you’ll read when getting to its bandcamp page might scare some lovely pure souls away before even giving it a try.

But don’t be fooled.. See it a bit like a house with a sign; warning that if you enter a dog will bite your ass, or a note that you’ll get shot by the owner if you step on the grass. It’s just a sign.. A form of protection to keep the unwanted non guests away & in this case to keep the unwanted listeners away and perhaps even attract some likeminded individuals..

So image and word wise this artist has protected this release with a tough image, but sound wise it feels much more reasonable. The tracks are of a noise kind but done in a way that it somehow tells a bit of a story. A rather odd one; no hero or real plot (or perhaps the plot got lost somewhere) but still a story. It’s a bit like lose ideas coming from a young Alfred Hitchcock kind of mind, who didn’t go for cinema stuff , but found joy in noise expressions..

The first track is one named CLOSED THROATS’.
The title might suggest some throats are being professionally closed down, and that’s in a sophisticated way exactly what is captured here in sound. Not so much the sound of the ones being chocked, but the focus is more on the action by the chocker. The chocker in this case impresses with sound, squeezing the throat a little bit more and more until the listener could feel the endorphins flow out of the brain and perhaps turn slightly blue from being breathless. It isn’t annoying or unpleasant as you might think; in fact to be chocked by a professional with sound is the safest way to explore a new way of getting high.

It must be said that the rush of the lack of oxygen is a high that releases all the endorphins all at once, which last basically just a few seconds. It’s very short but a similar rush in speed can be obtained by listening to ’16 & PREGNANT’. It’s like a peek of extreme panic in realization: a highlight before the freaked situation becomes an adjustable idea.

Another piece of audio is a track named fIREKILL, it takes it’s time; giving the listener the feeling that it’s some kind of silence before the storm. But instead of a storm it is someone from a lunatic asylum screaming loudly in a distorted microphone. After this expression the soft piece of peace and quiet takes over as if it’s the caring caretakers in doctors’ costume, patting the mental patient on the head while giving it a soothing tranquilizer. What happens next will bring doubt to the situation as suddenly a sound rises up that simply launches our own stability into cyberspace. Might we be the doctor and mental patient, listener and creator at the same time? The world is confused.. And who is this Romney?

DRAIN_ aims to please, calming the listening minds down to a certain none-trustable stableness. The soft soothing noise begins to transform; it starts to talk.. It’s the voice of a propagandist introducing the world of Jesus in our ears. Might he be our savior who can save us from a slight insane making sound discovery? You can ask, but the religious noise voice shapes in such a form that no answers can be heard.

This soft cloudy form of no answers suddenly gives some proof that something holy ‘exists’ as some space lightening buzzes come down from the sky. More language is spoken, this time it sounds friendlier; like a bearded friendly chap with its beard made out of fluffy soft noise. The track moves along and the beard gets bigger and bigger until it eats everything; leaving the ears delightfully surrounded in white beard noise, before moving into the sound of nothing.

With a track named ‘ST///HIS’ the nothing gets a fine swooping of a something that is loud and about. Perhaps it isn’t THAT loud, but the transition from the soft noise beard and nothing to this sound of something, is quite shocking. Makes you feel alive? Or the shock triggers a heart attack which means you feel alive and then you uh don’t feel alive no more..

‘TIL DEATH is a very intensive work, perhaps the most intensive one on this release. No more friendliness, this is a time for intervals of soft listening noise and bursts of hateful noise expression. Energetic outbursts of a tormented artist squirt its anger out through a megaphone until it goes back into the shimmering zone.

Even when the voice of anger is out shined by its own sinister laughter, the noise compositions that keep introducing themselves will keep the listeners at their toes. Some space birds fly low as if they predict bad weather. These birds fly nicely into the last track on this release which almost seems to be a continuation of the story.

Some new buzz smoothens out as alarm beeps start to beep and a whole arrangement of those birds come and fly in. They sound a bit like hungry predators flying around in circles in the hope to pick up some meat from one of the other listeners that didn’t survive the earlier induced heart attack. This is the end, but for you it might be the beginning. You can hear this release (which is made ‘live & loud) over at the following link:
https://chapters1.bandcamp.com/album/romney-til-death
<KN>

1 Response to RAEPUSBARABUS – ROMNEY ‘TIL DEATH