Those Damn Bloodsuckers – All That I Have. Nothing That You Want. 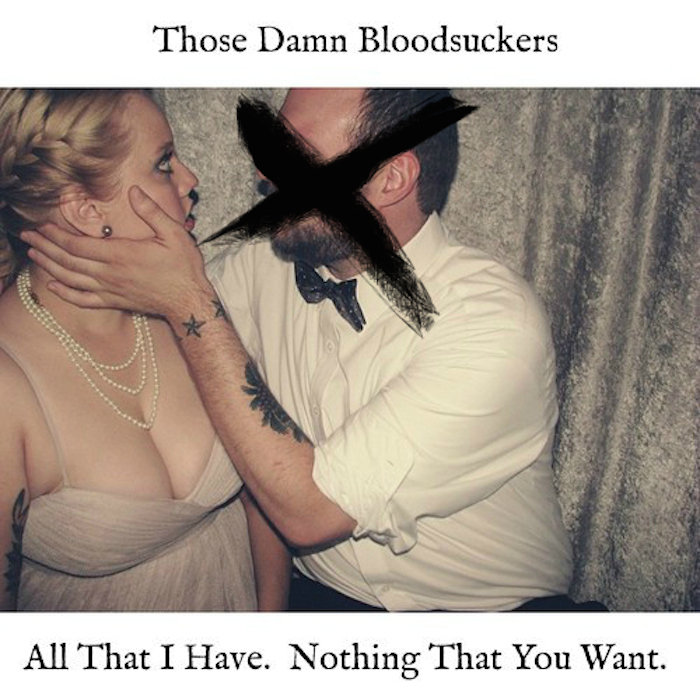 With something that sounds like an electronic woodblock in the morning, begins the beginning of this collection of new music by Those Damn Bloodsuckers. Wide awake the album starts with a sinister sounding sunset of doom. The tones that can be heard are the ones that would do justice to a graveyard picnic among people engaged in the Gothic lifestyle. If you are one of them and have managed to bring this music along, your graveyard picnicking friends would probably worship you as if you are the big goat herself. Just chill out on a gravestone, enjoy the sandwiches with black mold and spider pâté dressed in your darkest clothes to fully celebrate the sunset in style as if it would be the last sunset on earth.

Coincidence or not, the next piece of music fits this theme in a rather excellent way. It is called ‘Last Day On Earth’ and sounds as if we are listening to the earth as if it is a very old person walking its lasts steps on a pair of fragile legs while breathing through the occasional oxygen mask. The life support might help to get this old version of earth through the day, but indeed it doesn’t sound as if she will wake up tomorrow. A good idea perhaps to safe this elderly version of the earth is to never go to sleep as most people die in a bed. The track named ‘Never Sleep Again’ might be a warning to all of us; bringing a high sound on the deathbed of a lower one to understand this possible fragile situation.

The harshest beauty I fell a victim for is ‘Fell A Victim’. A sound showcase of tones, some nice, some in the middle and some of them penetratingly high on the frequency scale.  Is this the final end for mother earth captured in sound?

What follows after the earth story are tracks that come across as more separate happenings.
In ‘The Owls Are Not What They Seem’ we can hear the feathered wings of might it be.. owls? It sounds more like dark minded pigeons; but hey we at Yeah I Know It Sucks aren’t experts in birds.
And in ‘Those Fangs’ a moment of fine nothingness takes the ears to a sonic silence with only a small bleeping beep echoing in space.

The track ‘Daybreak’ is one of the more sweeter moments on this release. Giving a daybreak of soft lo-fi ambience that reveals a fluffy sound wave of pleasant relaxing music. A similar vibration comes out with a cooler and darker attitude in the last track named ‘The Blood Is The Life’. This track has a groovy lo-fi rhythm that made me think of leather jackets and tattoo-ed legs.

To me this album by Those Damn Bloodsuckers is a rather strange one, having tracks that feel as if they belong together to tell one single story, but also more random sound experiments captured in tracks of their own kind. There are lovely moments, groovy moments, the famous graveyard picnic moment, mother earth and baby earth moments and painful moments. If you are in a adventurous mood and found this something that might interest you, than please spare yourself a moment of your time and check out the music at the following link
https://thosedamnbloodsuckers.bandcamp.com/album/all-that-i-have-nothing-that-you-want