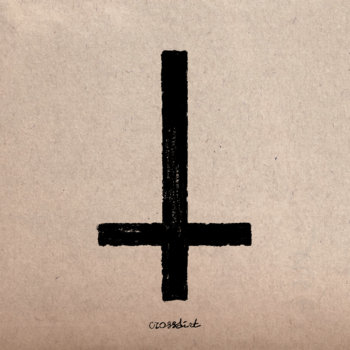 A road crossing like this one pictured on the front cover of this release is one that might be dangerous. Traffic could come from the left, right, back and the front, making it a good point to place such a ‘traffic sign’ when approaching such a critical connection of connected roads. It might prevent road accidents, traffic jams and even blocks out parts of the view behind it.

The music behind this image is not sounding as if it’s inspired by heavy traffic, or a classic case of a dodgy crossing. It starts for example with a track that sounds like we are listening to an automatic machine that in an industrial-tempo, shoots a mechanically charged bow and arrow. There are additional noises, but the sound of the arrow hitting the tree and bouncing a bit is the main attraction available over here. You might call it dance music for factory workers and modern day Robin Hoods, however here it is called ‘Benevolent Force’.

This theme of experimental industrial dance music will go on with the next presentation. Sounds that form a rhythm which could be used for dancing purposes. It’s up to you if you would react to this with a dance move, or indeed just let it go in your ears without triggering a muscle.

For a more sensible approach the next track seems to feature the recognizable sound of a piano. How it plays is dramatic, going for a certain sadness that sounds more at place at a gathering of Goths, than at a normal funeral. But if it was a funeral of Goths,  it would certainly be at place as both described happenings would happen at once.

The next listenable piece on this release is the darkness called ‘borderline’. It sounds like a drastic opening to a nightmarish landscape in a Arabic night while receiving a substantial load of electro shocks. Please do forget Madonna’s hit song from the eighties as this track kills it literally.

Alas, You Are Not The Same’ features the expected church bells that you would expect going off on some kind of eerie hour of the night. But it sounds sampled, making it a repetitive happening teamed up with strange underground sound muffles. In fact it isn’t hard to visualize dead bodies crawling back up to lift up the lid of their coffins and dig some more to resurface.

This ‘inquisition’ track on this release is harsh work. It’s rhythmic harshness that gives the feeling as if you’re under a train and then meet somewhere in the middle to be a guest on your own funeral. Rhythm and noise is an exploration perhaps not for everybody, but it is for sure a safer activity than climbing the Mount Everest on high heels.

Talking about high heels, some people find them sexy, which takes us to the track ‘cyber sex’. Why? Because this also might be considered a ‘sexy’ track. It’s one that consists of sexy cyber talk, and with this the release comes to an ending in which you are invited to take some time to touch yourself in appropriate ways. Or you could instead click the link and hear this album;
https://crossdirt.bandcamp.com/releases
<KN>