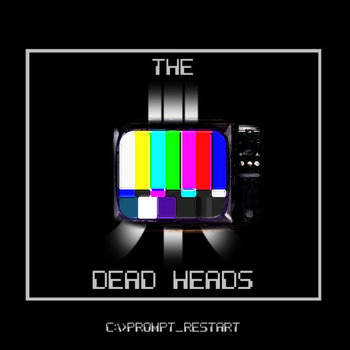 After a crap intro that functions as a filter to separate unwanted listeners from the close friends, mad fans and loved ones of ‘The Dead Heads’ the album goes forward. It does sound promising with this Beasty Boys versus Mister T kind of vibe in ‘Oh, Zip It  Mr. Fusion!’. It’s the music that talks in a almost threatening way of pointing a collection of guns at our faces. Oh yeah, a good start of this album.. (p.s. don’t shoot me)

Get Better Bear’ is this groovy silliness, a kind of cheesy music that might be about attacking hairy bears drinking beers in a men’s club, or the other kind of bears.

Another difficult track is ‘Mexican Step Dance’ in which the Dead Heads step by step fax their humor bits and pieces to our brains. It’s not really up to the listeners willing to receive it or pull the plug as it’s a bit like a offer you can’t refuse. I mean it’s like listening to mentally impaired mafia members who have taken over the lives of familial characters of Sesame Street.

#beautiful #slippery #sexy #corny The Dead Heads do their best applying hash tags and a sneaky little beat and a fine coolness to their ‘nagging balls’ kind of a track named ‘Maggot Box’.

From here these fellows are unstoppable, delivering a song for the Starwars fans, hip-hopping their way through the darkside, exploiting the Yedi stuff making this track a highlight for fans of very annoying and irritating songs. ‘No soda for you, no soda for yoda..’ It’s the music that would trigger Starwars fans to pick up their light-sabers and end their own lives. Quite brilliant.

‘Beat Me With A Crutch’ is starting with a circus intermezzo with a jumping sound, an elephant and lots of laughing laughers. There is also some salsa vibe going on.
The lyrics will ‘thank you’ for your time listening, which is appreciated as this showdon of random madness that closely borders total insanity, is a pretty tough thing to go through. It’s again as if the Dead Heads are the muppets from Sesame street, which seems to be their biggest inspiration throughout this album.

Blue glue is a fine piece of music, very short but sticky. No singing; it’s perfect.

‘What you hear is what you get’ and in the next case it would be a track named ‘Eyeball Search’ which is a cheese fest and makes this sesame street theme actually quite cute. Talking about this ‘Let’s eat cookies in bed’ must be inspired on the evil side of Cookie Monster.

Banana Problem’ is the least of your problems when living next door to the Dead Heads. Instead of calling the ghost busters, it might be adviced to call a psychiatric hospital and see if they have some patients on the loose.

Propeller Head’ is sounding a bit vague, experimental you might say. But it’s also a bit out there.. even among these other hard to get expressions of unfamiliar humor. Might the Dead Heads be stoned at the time of creation?

OMGGROTFLMAOOL is a bit like listening to Kris Kross but instead of having clothes the wrong way around, you want to flip yourself inside out. The ‘Remote Control Snake’ tune that follows is more a happy go lucky child friendly lightweight joy with random gibberish over it. You have to have an acquired taste to feel all these Dead Head specialties.

I can’t find my wallet’ is a nice piss-take bringing to mind English people who leave their wallets behind on some Arabian sounding lo-fi uptempo samba. By the way if you happen to have lost your sanity, big chance you won’t find it over here,

The ‘Dog and Pony Show’ has actually some nice retro sounding sounds forming it’s music. If you can filter out the odd talking vocals, you might even enjoy this tune. But don’t worry ‘Blue Glue 2’ is also here to provide some fine sounding game music. I see it as a most needed break from the other Dead Head songs, but tastes differ..

Meat’s Moderate Role’ is going for a pastry of meatballs, very quirky and cheesy. Next to it being meaty, it’s quite happy and sunny sounding. It’s also lightweight enough to actual find some love from me from potential haters. It must be the sunny melody that makes the track so easily digestible. It’s all for the sake and sense of humor, which the Dead Heads take seriously.

I feel like ‘Crisp’ is made for a theatre show on Broadway, something with Muppets and adult content. And ‘Sleep Camel’ is like listening to your fond memories of super Mario being raped multiple times.

Snake and Spiders’ is long, very long. So long it turns me into a sleeping zombie. The Dead Heads sounds fairly sleepy here too, seemingly mumbling their nonsense until I’ve gone to dreamland until the actual music starts to roll in, like a turtle with a drinking problem.

Waking up with ‘I & T’ is like waking up for breakfast, except there is no food other than a goofy track about eggs.

Hee Hee, OnlySserious’ is a perfect track for horsey riding; there is just something about this country and western kind of lunacy with bed wetting lyrics that will keep the hooves galloping. With this tempy  my ears have come to the final track on this album, a track that seems like the finish line of a hard day at the YIKIS office,
but it is also the end of this review and post. A reason to celebrate? Feel like joining this Dead Heads album and sink in this world of humor horror? Check it out at the following link:
https://deadheadsmusic.bandcamp.com/album/c-prompt-restart

1 Response to The Dead Heads – C:\>PROMPT_RESTART