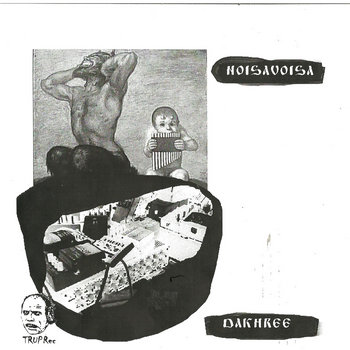 Noisavoisa is back with new material. Just like a comedian that goes away and then returns with new jokes, Noisavoisa had returned with a fresh new direction. Normally Noisavoisa would be more the act obviously linked to noise, but with this latest release it’s more something that walks a different road. Not that this can’t be considered as noise, but the mainline here seems to be some kind of alternative hardcore with fuzzy distortion. It does come across a bit weird as normally these kind of fellows that you could clarify as rhythm & noise, are mostly of lengthy lengths and made for ‘people’ to dance on.

Noisavoisa’s release however keeps its tracks short, the hardcore kick in the first track is not too upbeat and comes like this more across as a crossover to punk than alternative music that could be heard in industrial circles. It might just be that Noisavoisa’s new direction doesn’t give a shit about scenes, and basically just attempted to start a completely new one. It’s the future that will tell if it will be a new ‘thing’ or not, but at least Noisavoisa has no brakes on it’s producing skills to go for something Noisavoisa likes to hear, make and do. The second track strangely has something jazzy about it, (for some reason I have the idea jazz lovers would strongly disagree) but it is decorated with a noised up drumroll that is not really inviting to dance, but more like an experiment for the ears in rhythm and noise. If I would own a jazz club and it was time to empty the place I would play this track, I’m sure they will understand it more than me shouting ‘closing time!’.

The last track however is more straight to the point, a rolling drum and a faint sounding fuzzy cowboy on guitar. It’s all in that format that likes to be loud, but strangely to me doesn’t sound so loud or aggressive. It’s hard to make up what Noisavoisa is going for, to me it comes across as the producer is experimenting with new stuff and we can listen to Noisavoisa trying new things out. Does this make us feel a bit like a rabbit with make up on in order to test it before humans will smother it upon their faces? No, not at all.. It’s a voluntarily act to throw yourself in the experimental laboratory of Noisavoisa and I’m sure Noisavoisa is curious what kind of effect these tracks will have on you. Here there was relatively no effect, other than writing this what you are reading right now.. Don’t let that stop you and try Noisavoisa’s new directions at the following link:
https://noisavoisa.bandcamp.com/album/dakhree