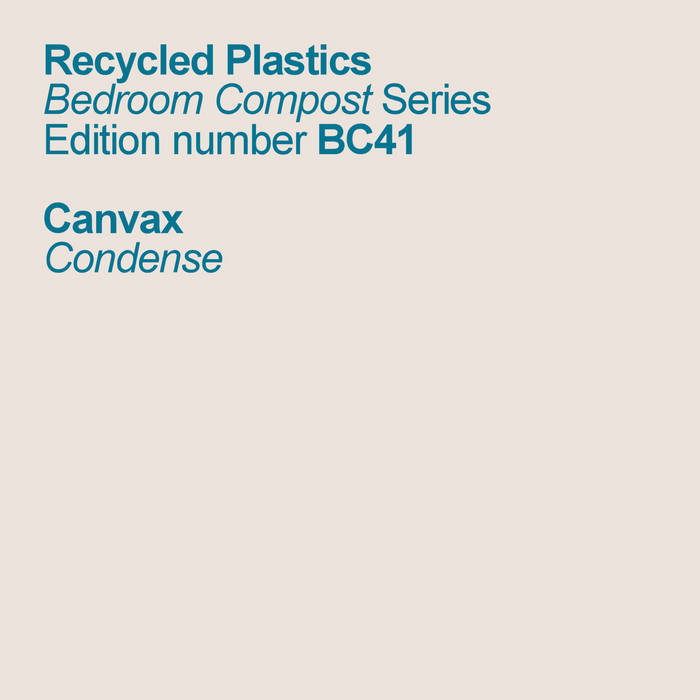 Canvax, the Dutch producer has returned with a brand new album. It is something for the hip crowd, the beard wearing characters and their equally bearded female counter parts. Even beardless hipsters with bold chins might start to stroke their phantom beards with intellectually fitting frowning eye-brows. Students, university goers, office people on their days off are definitely targeted here too, making the possible consumers the ones that have some money in their pockets to spend. Money is an important and great thing, and we will probably discuss it later..

This is the music that is so hot right now, a form of minimal techno that will probably get played in venues in order to make the alcohol sales go up. It is the music that make the nights that are setup, quite profitable for the bar owners. There you go, the word is out; this album by Canvas is a money making machine! You can just imagine the bar owners counting the packs of paper money that this music by Canvas can generate when it will be played by the in-house deejay. In fact, if you are an owner of a club, than please take note of this release, as this material might get your costumers hunkering to load their livers full with alcohol. It can be whiskey, vodka, cocktails, shots, or just the usual beers; but for sure the alcohol business will be booming when this music splashes out of the speakers.

Canvax’s Condense is the essential album for in the club that caters to a hip audience,
hunkering to the sounds of minimal dance music while intoxicating themselves to be able to forget how minimal things are. If enough alcohol is consumed they might even loosen up a little, move their finger or a leg, and maybe a complete body will be seen dancing in some minimal spasm.
It’s the music that gets the ‘Floor’ exciting and hyped up, but all done with the tight squeezed asses of the floor inhabitants. Students and hip young professionals, university goers and polo shirt wearers will stand around trying not to move too much as the music plays, trying to have a good time without getting too much attention; but with the necessary alcohol consumption you can actually see them coming to life when Canvax’s album plays.

Canvax’s music style has been successfully tested at the Gogbot Festival, making the owners of the festival so rich from festival-goers and their unstoppable urge for over drinking, that they have posted pictures of themselves on Instagram bathing in a bath full of golden coins. The minimal deep dance music by Canvas seriously has so much more to it than what people could hear on its surface, in fact music lovers don’t need to be totally drunk to enjoy it. Smoking weed is an healthy other solution perhaps, sober listening is possible; but it just doesn’t feel completely right when you go for that option.

Personal favorite on the album is a track named ‘Overcast’, which has a certain sense of humor to it. Imagine this specific minimal club scene on a Friday or a Saturday night, and this track playing. Everyone is doing their best to look cool, hip, modern and hot in the hope to find a sexual partner, but the music is basically secretly laughing at the crowd, binge sipping their expensive alcohol beverages in order to lose their stiffness and feel the music taking charge of their toes; as in shoes, nobody can actually see them dancing around like maniacs!

All in all, this new album by Canvax could be a great source of generating income. But as most business tools in the business, in order to make money, you’ll have to invest. In this case you have to buy a copy of Canvas’s Condense. (a code word for Con-dance), but trust me when you’ll play it in your club, or at your self-organized party, you’ll be rich in no time! (just make sure you have plenty of alcohol in stock..)
https://recycledplastics.bandcamp.com/album/condense