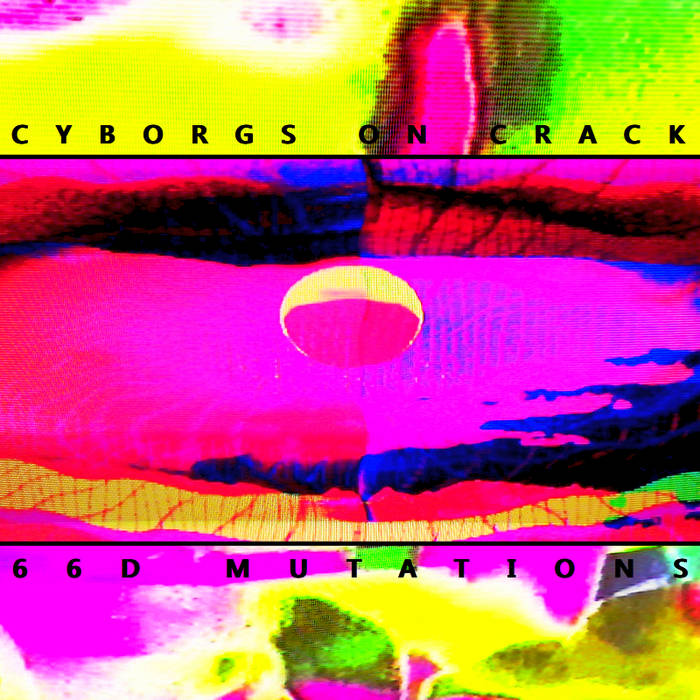 Cyborgs On Crack is back, back and forever kicking ass. The album that has dropped and already doped up some eighties fanatic in a fresh memory hole is named ‘66D Mutations. It starts with the instant blueberry smoothy named ‘Hypno’, you can instantly sit on that retro baseline, feel the authenticity of back to the future-past, hear the big beats and the synthetic melodies all lads in their thirties have been hunkering for. Get your mullets out, unfreeze Bubbles the monkey from MJ, rewatch ‘Baywatch’ and ‘Home Alone’ and go crazy!

Of course such a distinctive opener of a tune can’t have a failing follow upper; so Cyborgs On Crack brought in a tune named ‘Hello There My Name Is Bob’ and it has the potential to be enjoyed by a much larger crowd of alternative weirdoes. From semi out of date goths, industrial maniacs, electro heads, Gary Numan fans, Pop happy natters, electronic fetishists and of course everyone else that has been lurking around in the hope for more dope shit by Cyborgs On Crack. This track with it’s seemingly muffled vocal expressions is a clear sign of instant poppy catchiness, yet so formidable dressed up as an undercover agent; marvelous!

The third track is ‘Violence On Violence’ , seemingly covering a hot topic in the United States of them Americanos. My online eyes are force fed with visuals of unreal real violence on violence, but this tune is one that seems to sort out the aggressive tensions with certain classiness. There is the feeling of nostalgia, the great integration of singing random voices, even some guitar and everything is glued together in coziness.

Anton’s favorite track ‘Krankenhaus’ instantly makes me think ‘BATMAN!’, It must be that bass that hints so nicely to MJ’s Bad’ I’m BAD’ I’m BAD You Know IT Who’S BAD?’ a delirious lyric really.. Full of self-doubt and insecurity.. But Cyborgs On Crack has no room for insecurity, has left it all out of the picture; there is no posing, no ‘hiiiii hiiii’ but there is an awesome tune! This is the tune with the funky house piano, the almost german sounding vocals heavy spinning an industrial vibe that in this case has a certain amount of good humor and intent. Don’t expect anyone biting off any bat’s heads, but expect daffy duck and Yosemite Sam instead!

The track named after the album (or the other way around) is 66D Mutations’. It is one of a different order than the previous tracks; a very relaxing ambient kind of music that would suit perfectly in the background of a Chinese 6 star restaurant. It has this beautiful energy that makes the food on your plate extra tasty, tropical and delicious.

I’m Dissolving’ is an excellent tune, having the structure of a pop song that was once a big hit, but now shimmers in the limelight. It has the flair of an classic, an Depeche Mode, a Duran Duran, a Soft Cell, a Pete Burns without being Pete Burns and botox. It’s melody is one of the greatest on this album; simple, effective, catchy and will fit in anyone’s eighties playlist hidden between the biggest underground hits.

One of the more experimental, modern sounding funky tunes is the acid induced ‘Inkogkneetow (Elektro Bod-E Stomper Mix)’. It’s got this samba flute, mixed with the perfect acid bubbles and never stopping groove that is one that creates an instant party. It is here that you and your worst enemies can found mutual ground and dance like best friends forever and ever; good times!

The party will basically never stop as ‘No Words (Enerrgee Mix) will take over the dancing mood. This mix has next to good sentimental summer vibes, a good message inside. It’s more nineties, but that cannot bring it down on the scales of joy! To top it off is the happy ending of the album strangely titled ‘It Says Death Is Everywhere’ which sounds very upbeat and positive. A great injection of feel good material to send you on its way in the real world!  You can enjoy this album over here:

https://xosrecords.bandcamp.com/album/66d-mutations-2
but it is also available on VHS over here
<KN>