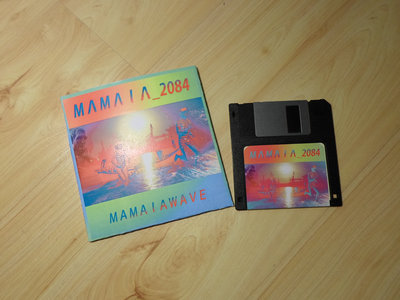 2014 was an excellent year for floppy enthusiasts and the uprising of the vaporwave genre. But the combination of these two is strangely (even in that year) a rare happening. That’s probably why the release of the MAMAIAWAVE disk was such an instant wild success story. On this floppy diskette pretty vaporwave is poured in to tickle everyone’s sensible senses & does it so nicely, that it simply has triggered some nice tiny miracles. For a start; it brought fans of floppies and vaporwave lovers together; forming a harmony that only hippies previously enjoyed in their own heydays.

But it also brought a mutual respect for these outlandish oddities, that even the haters of vaporwave and floppy disks could be found holding hands and French kissing like maniacs; that’s how much impact this release had and still seem to have.

But as with all touchable goodies, this one sold out like chocolate cookies in no-time and is now a product searched by vaporwave heads and floppy friends from all over the world. It’s on the hot list so to speak and hearing its content it isn’t hard to know why. This is quite the formidable material, nicking and picking only the best materials of other people their blood sweat and tears and returning it in a new form that is absolutely enjoyable.

The whole mood has a vaporwave ambient-ish atmosphere; something that you would enjoy while going for a late night drive with your floppy disk player magically playing the vibes from your hacked car radio. There is singing and there is slight dancing, but it is calm, quite  delicate done as if it’s there to conceive a kind of romance of audio. In fact this might be the music that will finally get you that mystery kiss while playing this with your want-to-be-lover in the back seat.

Vaporwave and floppy disks are simply a match made in heaven, or more precisely a well-chosen choice made here down on earth; and the love sparkles between the two of them (and them being sexually merged in to each other) simply pops out as a vibe that is utterly romantic. It’s the music release that might even get the wearers if excessive mullets a possibility for a happy shag with a partner of their choice. It’s like old fashioned eighties foreign language love potion which probably explains why so many people are hunting these rare to find sold out floppy disks.

If you ever come across them, my advice is to obtain them whatever the consequences, costs or personal reputation damages will appear; trust me, this floppy is worth the jail time!
https://mamaia2084.bandcamp.com/merch/mamaiawave-floppy-disk