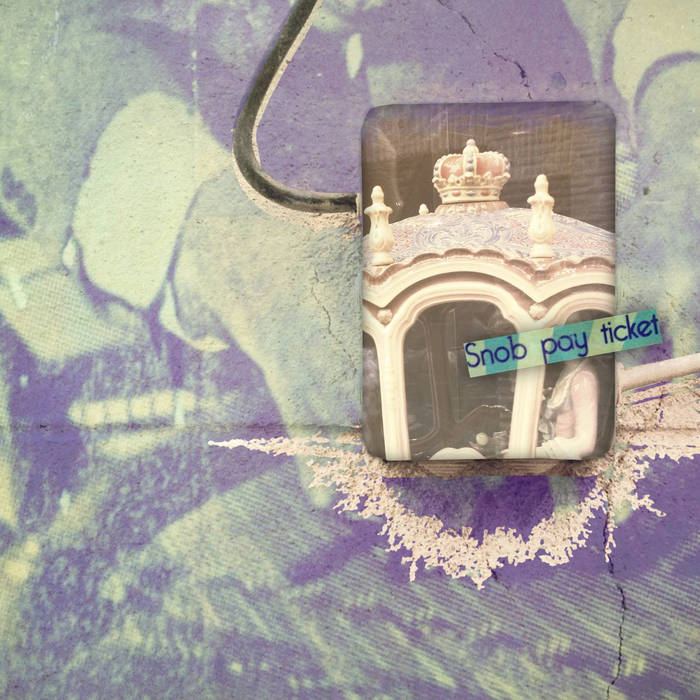 Massimo Megee starts with a grand opening for this elusive compilation of poor people’s electronics. It’s like the electric interpretation of a fart, done between tightly squeezed pair of buttocks. Lovely!

Gintas K’s Jesus Safe My Soul’ is indeed a strong second opener; going for an outrageously potent minimal mix of danceable techno nerves, which techno veterans probably will down their meds on. It has something in common with aggressively brushing your left over teeth with an electric toothbrush & it thoroughly excites me in a full frantic way!

Now it’s time to introduce myself, or perhaps not as that would make this review so high up in the biased scale. To be clear, if you tune in to this compilation you will be able to hear me and my friends instead of reading the words that I write here for you on my own.

Skipping track 3 will automatically mean that we have the music of another well-loved underground Chick named ‘Furchick’. Here Furchick takes on a very hot, dirty and nasty scene of sexy time. We can hear the temperature being high enough to get everyone’s clothes off. There are the voices of sexual lust, freaky moves, and inner beasts carefully attending this dark mixture of erotic business. Feel free to act like a pussy cat, the long tongued elephant that can lick like Lassie, or whatever you are in your deepest and darkest sexual fantasies: Furchick gives you the soundtrack to embrace your inner sexy dirtiness!

Datewithdeath brings the ‘cough style’ to this episode of poverty electronics; this consists of not so much coughing but more a steady electric groove that you can feel deep down into your underground bones, and secretly invites even the stiff and the stubborn listeners to engage in a cool finger snipping dance.

Underground genius, artist, mad scientist and header of out of boxes compositions in electronica aka ‘Jukka-Pekka Kervinen’ also brought in a piece of fine excitement. Think rattling electronica, kind and gentle flitching away like a jazz musician from outer space. What else do you need more? Perhaps you like a cigarette? Or maybe you fancy a trolley to push your possessions through the streets? Great stuff!

But no less is for sure the work done by Justin Marc Lloyd. Here this artist kindly redefines the boundaries if experimental music, rescaling the rules by delivering a work that throws unwritten rules in to a sink bed of awesomeness. One moment you think you are riding on cologne of flying bees, and another you are trapped in some mystical Arabic basement, a futuristic data stream and all round crisper corners of untouched zones of audio avant-garde.

TOTALITNY REZIM gives us some great old school flavor alien-wise. Here the master of industrial alienating technically far out there soundscapes leaves his distinctive trademark all over this fine listening piece.

The track done, created and donated here by ABSV kindly orientates on a groovy rhythm that quickly will turn even the stiffest person on earth in a moving object bouncing to these table top knockers. The programmed rattle groove sounds as if it’s done with sampling forks and spoons making it a true DIY classy feel to it.

Der Domestizierte Mensch doesn’t go into the relax zone as the track here leans also heavy on a hard crash of found sound and forcible rhythm. It sounds like the ideal tune to listen while smashing up things.

cays seems to bring in a nice bag of blender sounds and creates a strange rhythmic sound track from it.  There are the analogue instruments now digitized and shaped in computerist robot dance music, and it sounds pretty energetic and quite fun.

Somnaphon’s terrain eater is a nice warm and shimmery originality. It feels as if an unknown life form that has the trademarks of a cyber-genetic earth worm with artificial electronics and a taste for sand is busy eating, while pretty mystery music forms the soundtrack to complement its meal.

Jean-Luc Grodard brings in the kind forms of noise; all warm and fuzzy with eye for strange encounters of lucid sounding sound characters. It’s like a bizarre fantasy scene in a Lewis Carroll story, but then expressed through cloudy noise and it’s clear revelations of madness. The time for experimentalist’s to celebrate their unbirthday parties!

Jack Hertz’s track on this compilation is quite fun sounding too. It’s named ‘ice beat’ and sounds as if the artist has spend a great amount of time in recording ice, the melting part of it, the crunchy parts and the cold wetness crackles. The whole collection is then (I presume) carefully redrafted and worked out in rhythmic way that sounds refreshingly warm for avant-garde ice handling. Never heard something like this before!

Ars Sonar’s track gives the extra power punch to this collection of music; going for a straight dark electronic stomper that marries the darkness of the night with the secrets of power industrial. It’s the music that can be worn on the ears as a shield to protect from the nastiness of the outside world, greatly fighting and empowering the individual with techno attitude that made me feel like being in that movie named ‘bladderunner’.

Nihil Obstad created a alienated soundscape in which fuzzy strangeness and in your face warmth gets mixed with bizarre darkness. It’s difficult to put your finger on it and establish of it being the sounds of a ‘safe’ planet, or that this foreign alien world might be full of unexplored dangers. Fascinating!

The music dropped here by Jaan Patterson keeps the alien atmosphere and adds some German words to it, spoken as if it’s done by a half robot versus half human. It softly bubbles along posing no harm or real nightmare material; actually calming me down like some weird uncle that you can trust although you’ve never met him.

Acrid Lemon will make everyone in need for a fine early Aphex Twin substitute very happy with the delivery of his track named ‘active drug 2’. It’s as if the artist dug deep in everyone’s favorite soul masters early work and re-builded it to great satisfaction. Think warm synthesizer sounds warming the music up, and beats that sounds as if they have come from the master’s ‘bouncing ball period’.

Jaded Evil Lambs brings some religious themed experimentalism to the collection. The music doesn’t get us close to a real holy revelation, but goes more for a nicely camouflaged safety net in which glitch sounds rule their swords of Justice. Does this make sense? Probably not, but it’s the thought that counts.

After this it’s time to hear the ‘Great Ape’ by ‘A Raja’s Mesh Men’. Hearing it there is no doubt on my head that this is a very great and big ape. A bit like a dinosaur, a Godzilla sized great ape who steps around crushing things under the great ape’s feet.

adeliberateerror brings a track that sounds the complete opposite of the great ape flatting things with every step; this is like a very lovely minimal electric work that tickles thoughts of dreamy brain-dance that smells of roses and other cute flowers. The crisper beat is coming across very friendly and kind, and so are the minimal intervals of miniature melodies.

The short rhythmic showcase done by OD.ra, is a good example of how drummers in the future would sound like when going for a groovy session mixed with intergalactic love for sounds. It’s really groovy, and wishes it could have gone on forever!

But for forever we have obviously not so much time available as now it’s time for the ‘Dirty Drones’ of Stormhat. These Stormhat drones are indeed dirty, but they are also sounding quite electrifying. It’s like a concerto of high voltages, carefully orchestrated to sound amazing and intriguing. This is pretty bad ass!

And the work by ‘Acod Majik’ isn’t less on the kick ass scale! Here a very comfortable potion of trip music seems to have come to life, sweetly and softly bubbling around like a highness in which we lost our senses… This can happen… And it is a pleasurable feeling really…

But don’t panic as it’s good to be so relaxed and at ease, especially being at this place where Panelak provides the music. Panelak’s Schneerarbeiter goes for an interesting chill out audio collage of sounds, lo-fi hints and rhythm progression that kindly does its own thing, without being the slightest bit unlistenable. It’s also coming across as a bit of an audio puzzle; bringing so many audio sounds to the mix that you can guess what they had been in their previous lives outside of this collage.

The time for a piece of art is always most welcome, especially when it’s a ‘Self-Portrait’ by AG Davis. Here AG Davis paints his head with silly features; a long forehead, big ears and a drunken trumpet instead of a nose!

Underglass’s track is pretty stunning.. It all starts with Underglass ticking a glass, and then suddenly a portal to another world opens up. It’s as if the sounds go underneath the glass’s existence; screwing the foundations like a dark earth worm who ate a lot, and has alien features never heard or seen on earth. Or is it just the sound of a underwater hoover?

The track done by {AN} Eel keeps this DIY feeling of cups, tea spoons and household equipment up, and molds it in to a listenable shorty of a soundscape.

With a great bombastic  entrance ‘Thigh Gap’ pops in, bringing a stimulating dark buzzing vibe that sounds as if it has been formed of sedated aggression. It shimmers nicely like a dangerous animal that provides wild screams on a bed of fitting noise! This is pretty brilliant material right here, and it’s fittingly called ‘Your Psyche Is My Womb’.

Ben Presto brings a colorful collage of opera, sneezing opera performers, mysterious piano bits, chopped singing practices and it sounds like it had brought out all the insane obscenity from this underdog of classical tainted music out in the open.

Then ‘The Waking Life’s 8.29.2014 (Carl Kruger Edit) is up to do its thing. It’s a nice bit of music, very warm, yet there is a bit of iron clinging going on and perhaps some water things. It’s experimental stuff so don’t blame me for not reporting on it in all the great details. In general it’s a nice place to sit in and relax; while obviously wondering what the hell it is that you might be hearing.

The Chefkirk also made it onto this poverty compilation, it might just be 29 seconds in length; but without it this compilation wouldn’t have been the same.

Public’s favorite experimental artist ‘hiyohiyoipseniyo’ has the great honor to bring the last track on this collection of wildly listenable experimental music pieces. Of course (legend that this artist is) the track fills everyone’s high expectations and needs until great detail. Random artifacts of sounds are swung in your ears, some silence too.. A pretty piece to hear and make you hungry for more from where this poverty electronics had come from..
You can get this compilation for free at the following link:
https://povertyelectronics.bandcamp.com/album/poverty-electronics-vol-3