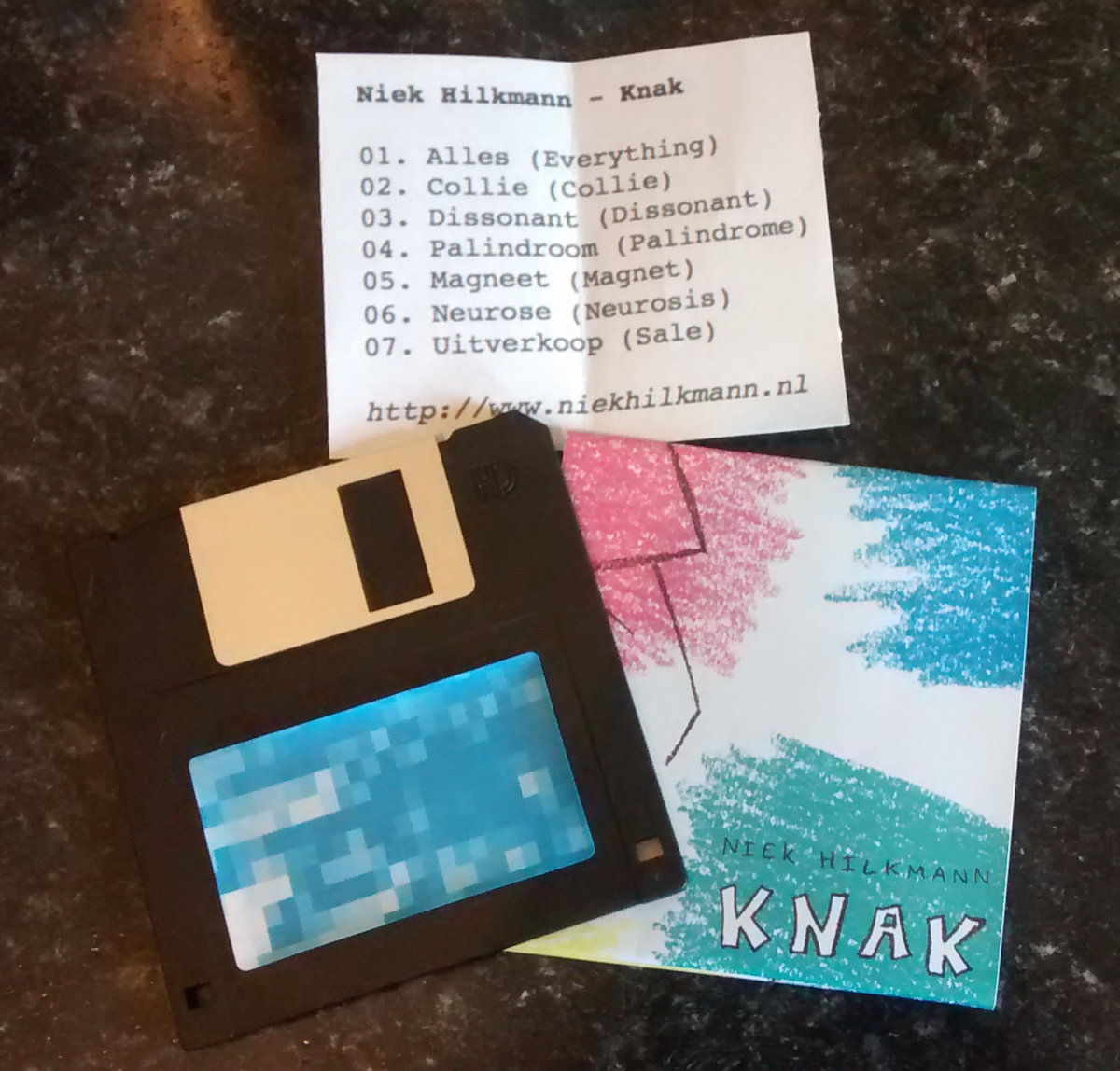 Niek Hilkmann is a bit like that fat guy from Asterix and Obelix… No not body wise, but more as in ‘Obelix who had fallen in to a pot of super power’ and Niek obviously had been exposed at an early age to the contents of a pot with a lifesaving elixir of happiness and enthusiasm. He is doing so many things, and whatever he does or has his hands in; he does it with an energetic smile that is very contagious.

This contagiousness enthusiasm is something difficult to capture in music by a lot of music makers, they probably do so many takes of a song, killing the happy joy of actually playing music by over producing it in a state of the art recording studio. But this doesn’t happen to Niek! And especially not with his latest album named ‘Knak’. Here this young ball of enthusiasm is captured in full action, delivering wonky pop music of a very contagious kind!

The album has been released on CD and digital, but for the best enjoyable quality in a worldwide way it’s best to get your hands on the floppy version of ‘Knak’. This version sounds (believed me or not) very clean cut and yet very nice and comfy. It captured the same amount of energy as the CD version but comes with so much more warmth that sounds very nice and fine to the ears. It’s having the same impact of sitting close to a FM radio discovering a wild pop show of jolly music; it instantly brings a new flair of nostalgia!

The first track is named ‘Alles’ which means ‘everything’ in the language that Niek sings his songs in. A couple of months ago he claimed to fight for his own language, declaring a passionate love for Dutch words which he would defend against the dominating other languages that lurk around. And that’s probably why I feel that the floppy version of his album is more of an global release, something that is putting the pressure off words and focused more on the complete vibe of energy within the music. The language of music is pretty universal!

‘Alles’ is a strong opener, pulls out ‘everything’ to set the instant mood of happy but determent playfulness. The guitars rumble, the drum does its thing and it’s clear that this is a passionate song probably triggered by a funny thing named love. Niek throws even more on top of ‘already everything’ at the final end of the song, making it clear that he means every word and every note! It’s like listening to the happiest punk track in the world!

Collie’ is the next song which goes for a different approach then the more rocking openings tune. Here Niek uses a great deal of his voice as an happy go lucky instrument, colorfully decorating a melody played on something that sounds like a children’s organ. The song is about a dog and I believe we have reviewed it somewhere here on this blog before with an accompanying video clip. It sounds in this refreshing low-bit rate like it’s made for a doll… You know these talking dolls, teddy bears that you can squeeze and a voice comes out… Wouldn’t it be fantastic to have one who plays this tune by Niek every time you squeeze? Maybe a great idea as a release format for an album in Niek’s glorious upcoming future! A squeezable border collie doll!

Dissonant’ is a heartwarming song that sounds like a lovely lullaby with great eye for the young at the heart. The atmosphere in this floppy variant of the song comes across so friendly and cozy, that it makes me want to curl up in fetus position and enjoy the soothing sounds as if being a baby. When Niek sings his song there is one part that makes it possible for people of all ages, languages and cultures to sing a lala-long. Very sweet and dreamy!

The next lovely sounding song is ‘Palindroom’, it has a funny effect on my music loving brain as on one side I would like to report that this is probably the strongest song on Knak because of its grown up flavor, but on the other hand it perfectly combines it with a pop chorus that wouldn’t sound out of place at a classic Muppets show performance. The song follows a great pop structure, without ever sounding uptight! It’s the music you would like to play for friends and people at an intimate party in which everyone can hold hands and enjoy the feeling of happiness.

Then this Niek brings in a song that we professional reviewers would call ‘a floater’. It doesn’t happen often that you can hear the colleagues in the hallway exchanging the famous words of ‘…looks like we got ourselves a floater!’ But when it happens you know everyone gets excited. The floater in question is called ‘Magneet’ (magnet) and really floats around as if you have indulged a perfect state of mind by drinking a perfect amount of alcoholics. The kind that you feel jolly, happy, talkative and not close to puking, falling over or blacking out; it really feels like music resembling a perfect intoxication without all the health hazards. Just twirl around, be happy when the floater floats in your ears.

Another great pop-formula is established with a song named ‘Neurose’; this song goes for the catchy inviting baseline, happy melody and lots of bursting fun and energy. Never thought to hear such a jolly song about a neurosis, but with people like Niek; magic indeed might happen!

The last song is ‘Uitverkoop’ (sale) which has a really nice vibe to interlock arms with people (real or non-existing) around you and move from side to side on the folky full on carousel music. There is the pretty organ, a candid whistle and Niek who sings in his native language that he will sell everything. And indeed with an album like this, it shouldn’t really be a problem to get them sold to the public! Really a nice warm and fun loving album by a passionate happy source of enthusiasm! You can get the CD, Tape, digital download from his own website, but the here discussed floppy version of Knak is available through the quality UK label of happiness Wrieuw Recordings! Handmade and full of floppy love, hear and order this wonderful album over here:
https://wrieuwrecordings.bandcamp.com/album/knak
<KN>