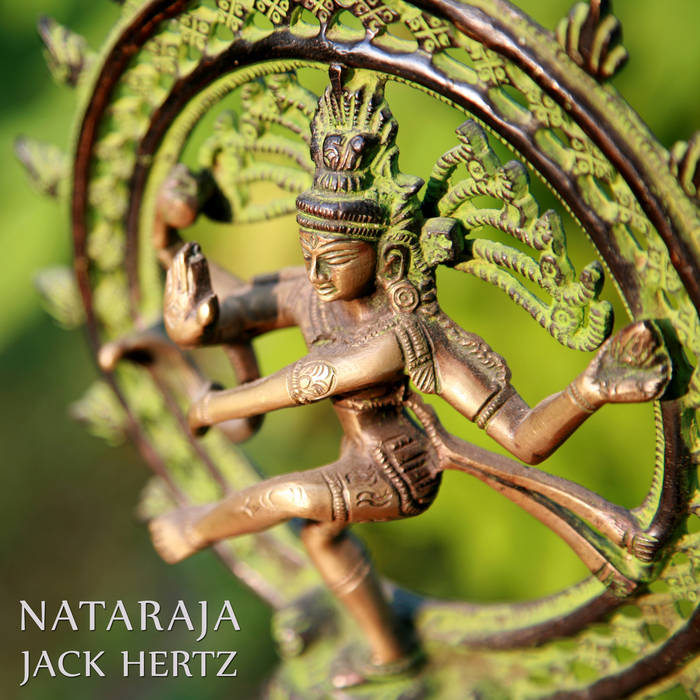 Jack Hertz is celebrating his 99 releases with 1 more! And this 100th release isn’t just a celebration; it is one that is pretty special! Here is a tiny bit of official information:

—-
Jack Hertz presents his 100th album release with an album of Fourth World styled compositions dedicated to the Hindu deity, Nataraja. An ancient symbol that represents the rhythm and harmony of life. Drawing on 3 decades of work with original electronic music. “Nataraja” presents a suite of ten sonic spaces that invite the listener to reflect on the exotic, sonic and spiritual.
—-

Of course we all should know about the Hindu deity Nataraja, and if you don’t know; let this be a reason to gain some interest and dive in some fine internet based research. You can start with reading the additional information of the bandcamp page that this release so gracefully sits, or perhaps take a shortcut to Wikipedia or something like that. In other words, It’s utterly cool that this special release has a special theme and concept, but simpleton as I am; I will forget all that in order to talk about the music, and the music only.

The album starts with the very pretty and mysterious sounding ‘Harmonic Flow’ in which with eyes closed it would be without doubt give you this surreal vision of wandering politely in a world of indeed Hindu mystics. The melodic composition is seemingly done on acoustic instruments and are waves into each other as if they are mysterious  drapes of information that interlock politely, creating a strange yet dreamlike exotic sound and feel. For some strange reason I’m feeling more like a Indiana Jones or a exploring Laura Tomb raider then someone whose brain is filled with wisdom and knowledge. It’s like visiting a space that is severely beautiful and yet unknown. (That is of course not applicable when you are yourself a Hindu, or very read up about the culture…)

The second track is Rain of Ice and is a really nice and enjoyable work that goes for a polite percussion, drowned guitar accents, warm electronics flavors and is something that feels very at ease and relaxed. It’s as if the music tells that we are welcome in this unknown world and shouldn’t be afraid to enjoy it.

Troubling Questions’ goes for a more shimmering piece in which the journey of us being politely guided by the music of Jack Hertz goes on in another mystic sounding corner. It’s too, the rhythm and strange melodic ambient atmosphere is one that fits the requirements of being ambient for the mind, but still I feel its perfect music for exploring a lost and overgrown Hindu temple. Just imagine us with our torches on and our mouths wide open at every newly explored sight. It’s pretty adventurous ambient!

When Jack Hertz presents a track named ‘Anandatandava’ I feel it as if we have reached an open bit in this mysterious discovery. The roof might have been gone and the light of the sun lights up the overgrowth of jungle plants and temple artifacts. Some small butterflies, glow in the dark flying friends might decorate this pretty place, and it can’t be disagreed that this is a pretty place to stay and feel good.

Clipping Memories is up next, which seems to have integrated a little bit more electronics in to this authentic world of mysticism. There are nice synth elements, creating a realm for the spiritually enlightened who likes their music futuristic and yet stepping around in ancient sounding wisdom of times. The electronic feeling gets nicely broken by the additional rattling of something that sounds like a collection of trip-boils and stirring teaspoons.

Jack Hertz celebrates more with his tremendous amount of utterly relaxing music. He entertains his listeners with more next level music. In this case it’s the tracks titled ‘Weather Vane’ and the following ‘Ozone rising’ of course both tracks are different, but both of them are giving me the feeling that there is no bottom and neither gravity. The music becomes much dreamier, and it’s a bit like leaving the human form and let your music-listening-spirit fly out and discover an out of body experience.

What follows next is this other source of mysterious mystique named ‘Seer’. Jack Hertz knits together an audio soundscape that looks severely close to music, but is at the same time like a thin veil that obstructs the view and yet let you hear through it. There are bell like instruments giving a gamelan like feeling, there are electronic happenings that sometimes even hit the frequency that dog whistles have… It’s a difficult work to define, and yet it sounds very refined and gentle.

The 100th release of Jack Hertz then introduces a track named ‘Gong Circle’ and because if this I was expecting my head being penetrated by a bunch of loud sounding gongs… But that was a false promise as this track felt more as if it was a ‘bong circle’ … You know, perfectly relaxed with a bunch of intimates exchanging the fumes of a lung tickling bong. The music is perfect for it; no in your face trip disturbances but music that is made to flow your stoner thoughts on.

The last track is Nataraja and of course this is the work in which all the highlights of music has gathered to provide a most welcoming soup of all the good things that the precious tracks had touched upon. There are the Hindu hints, the authentic trip instruments of forgotten times; the ultimate skill of Jack Hertz doing magic with synthetic electronics and the results is full on psychedelic beauty!
Take the trip over here:
https://auralfilms.bandcamp.com/album/nataraja
<KN>