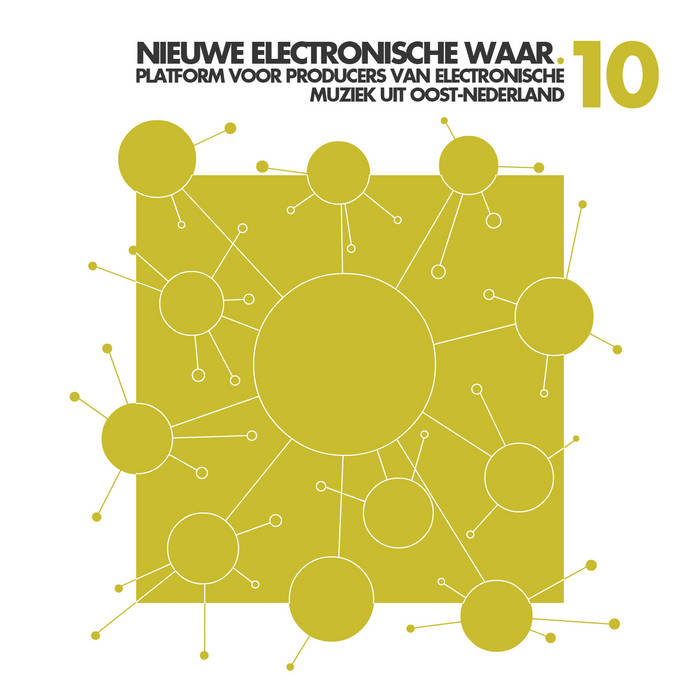 Nieuwe Electronische Waar is an organization or perhaps a platform that has been around for ten years, showcasing new and upcoming electronica talent from the east of the Netherlands. Every year the organization goes through a massive selection procedure to find only (in their humble opinion) the best producers that deserve a place in the spotlight. Next to helping these artists to be seen, their yearly compilation of these talents is one definitely to be heard. Just very recently the tenth episode of their trendsetting compilation had been made public to the world, and is available through various platforms and websites. There is simply no stone left unturned to get this fresh load of electronic music makers out and about… And listening to this compilation simply explains why!

Take for example Bremer who starts this compilation with a track named Grácia… This doesn’t sound like the sound of a new comer, this track sounds as professional as if Bremer has been around in the electronic music business for many years; everything sounds right. The subtle acid smoothness, the warmth of quality house, accentuating synth use… It sounds minimal, but it’s done in such a way that everything has its right place and feeling. You can hear that the music should have gone for much longer, but as the social practice of showcasing multiple talents on one album it was probably just time to make way for another goody.

On a side note; big props to the one who mastered these tracks, as they sound pretty full on in togetherness, making that next ‘goody’ slip in as if they were made for each-other. This track is named ‘last night’ by Clubfratsen. It’s a track that shimmers in the corners of rhythmic chill out, with deep warm electronic pleasantness and a samples voice that helps a great deal making this stoner friendly music into something memorable. We might even classify it as dream pop…

The third talent in The Welvins, and here the reference to marihuana pops out through a sample, secretly confessing that our prejudged idea of Dutch electronica must be not only done with talent, instruments and groove but of course also with a tremendous amount of THC. It’s probably weird to say, but as a follower of the N.E.W. compilations this stoner friendly electronica is a theme that strangely keeps all these producers together as a reoccurring theme. Perhaps this is what makes electronica from the easy of the Netherlands stands out and gives it their own recognizable personality. But of course it’s the talent that counts and what really makes these artists do what they are doing. And it’s pretty clear that ‘The Welvins’ for sure have earned their spot on this showcase. The track ‘Paradise Dream Stealer’ is one based on a great melody and punchy beat; together they form a dance track that has something Mexican over it. I’m not high on those Dutch weeds but for some reason this track transport me to a Mexican landscape with agave and cactuses, sombreros, ponchos and coronas. It’s probably a prejudice too, but so be it. The music gets a bit dubstep-py but refrains from being framed in a time and has a strong identity of its own. In case you wanted to know; I’ve been playing this track on repeat for at least twenty minutes & still couldn’t get enough of it. (It’s time to open another Mexican beer!)

Rude Gullit totally shred away from the step and goes for public’s favorite ‘dub’ sound! It sounds very good; you can hear that probably years of listening experience has laid off its fruits in a great way. I don’t want to brag, but I’ve seen a English veteran old school dub producer at work in his backyard studio and I am glad to hear that Rude Gullit has all the essentials in his mix to keep the tradition going, but also has brought a own identity to the style; more laid-back I would say.. I’ll throw my dreadlocks up and down and do some high kicks on this Diertjes Dub.

Cloack keeps the high fidelity love high up with a track named ‘Armitage’ which strongly and quickly develops in a thematic electronic that could be easily viewed as a mega summer dance festival tune. It isn’t pounding or focusing on tough hard beats, but the production and the melody has something very epic and hypnotizing.

It’s good to hear that not all the new talents of the east of the Netherlands are all presenting them self in a serious way. Monom3 really delivers a friendly and happy tune that isn’t only great for feel good fun on the dance floor, but also satisfies the ears with humor as an instrument. There is ridiculous whistling on an addictive baseline, human mouth rhythms and a nice rolling active best of happiness. Monom3’s style sounds fresh and is perhaps the perfect candidate you should hire to play at your party! That is if it’s one aimed to bring good vibes…

More chill out is a track by Hanami. It’s a bit sleepy, dream house-ish material that plays out a rhythmic mix of warmth and steady beat with some decorative percussion and additional birds in the background. It’s a track that is nice, but would probably be nicer when you as a listener inhaled some green puff from a coffee-shop in the east of the Netherlands.

As a sober person, I’m very happy when the track by the next showcasing new talent had arrived. This is Haze, and the tune is named ‘Meant To Be’ which is probably one of the strongest songs of commercial potential on this compilation. It features carefully crafted pleasant female vocals that perfectly sit in a mix of electronic modernness that does sound original and new to my ears. This is a good thing, as with so many music around a lot of own identity gets lost; but ‘Haze’ follows a certain pop structure without sounding like one of the million. The electronic programming, the nice melodic piano bits and pretty vocals on a beat that seems to float is a real candy for the ears. If MTV would skip all the crap things and return to actually being a music channel; I would have great hope to see and hear this song by Haze at least once every hour. Good stuff!

Stefano is up next with a lengthy work named Wander vs The Collosus. It comes across to me as a colossal introduction that than towards a colossal ending.

I can’t help but yet again underline that the music done on these N.E.W. compilations are perfect collection of stoner friendly material. The dreamy techno house production by Sonurber keeps this realm of highness nicely flowing, bringing its determent slow dance track into one that fits the tempo of rolling one up, and puffing one in a corner while your head bounces up and down with the rhythm and electric melody. I would say enough reasons to come and download this new addition of N.E.W. at the following link:
http://www.escrec.com/5969
<KN>