The prolific self-thought artist Sean Derrick Cooper Marquardt is one that makes music through feelings and devotion. He is well known for his use and invention of the ‘accidental guitar method*’

Sean Derrick Cooper Marquardt has produced more than 400 releases and worked together with a massive amount of big names in the underground music scene; for example the legendary Richard Ramirez (black leather Jesus) , long form experimental noise artist Elizabeth Veldon, GX from the haters and by way far too many respected artists to mention here..

One thing keeps all these collaborators together; they all work through a feel and connection way, something that some technically schooled music producers will not be able to capture, as this has something that deals with music coming out of a expressionists soul, more than from a classic how to make music school book.

There are many devotional albums made on feelings like love, heartbreak, sorrow and anger. But sometimes there is another much heavier trigger that opens up a portal to an expression of feelings and creativity; the abrupt loss of someone you deeply love with all your roots when it’s not their natural time to go. Only people who had such a drastic traumatic event in their lives will know how it affects them, how much pain this causes and how life has changed beyond the unimaginable.

At the age of seven the great experimental improvisational sound artist named Sean Derrick Cooper Marquardt lost his mother through murder; a harsh fact that even as an outsider will be felt like a pain in the heart, with feelings that cannot even touch upon how it must have been for the than little boy.

Sean Derrick Cooper Marquardt carried this traumatic life changing moment throughout his life as a well-kept personal secret, he kept it to himself because of the risk that people around him might not understand, or might see the artist (and friend) in a different light then before.

But Sean Derrick Cooper Marquardt didn’t open up to us here to receive anyone’s pity, but did it to underline and declare that a very special album/project named ‘music for the dead’ is devoted to his well missed and beloved mother.

Music For The Dead’ is a drone drama that one day will find its way into the theater, but for now is growing larger by being released in multiple languages.
This is a gift that makes the special album one that can travel through the language barriers; so it can easily find a place all over the world, traveling from ear to heart & from heart to soul.

At the moment of writing the album has been released and translated in the following languages: English, Italian, Norwegian, Dutch and Croatian & French. And as a fortune teller looking in a bowl to predict the future; I can see that there are more translations of this album to follow.
A good place to keep in track can be found over at the official Facebook page:
https://m.facebook.com/profile.php?id=746724512070257

Important to note is that the album travels along with a special written poem that is specially written by the talented author Patricia Holland Moritz’.** Her collaboration with Sean Derrick Cooper Marquardt is one of wonder as her beautiful written poem also gets translated with every new release. Her poem ‘music for the dead’ has now been translated in English, Italian, Norwegian, Croatian, French and Dutch, but with pleasure I’ll be able to place the English version over here for your eyes to read, and emotions to connect with:

music for the dead

Of course this special release also deserves special artwork. The one for ‘Music for the Dead’ is done by ōnyūdō label owner and Sean Derrick Cooper Marquardt’s friend ‘Martin Otis’, who without, the album would not have gotten off the ground. His cover and layout now travels from label, to label making it the first visual iconic invitation to the music that lies behind it. 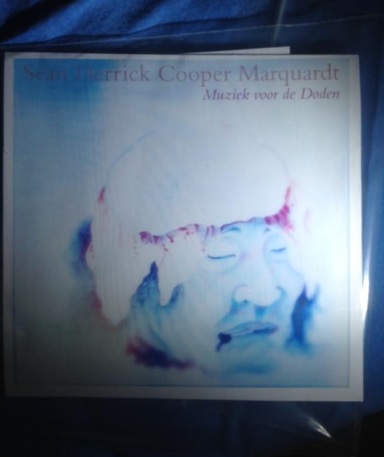 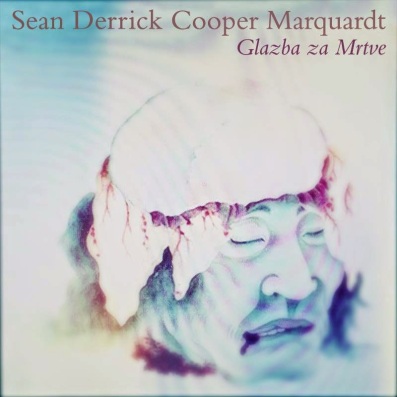 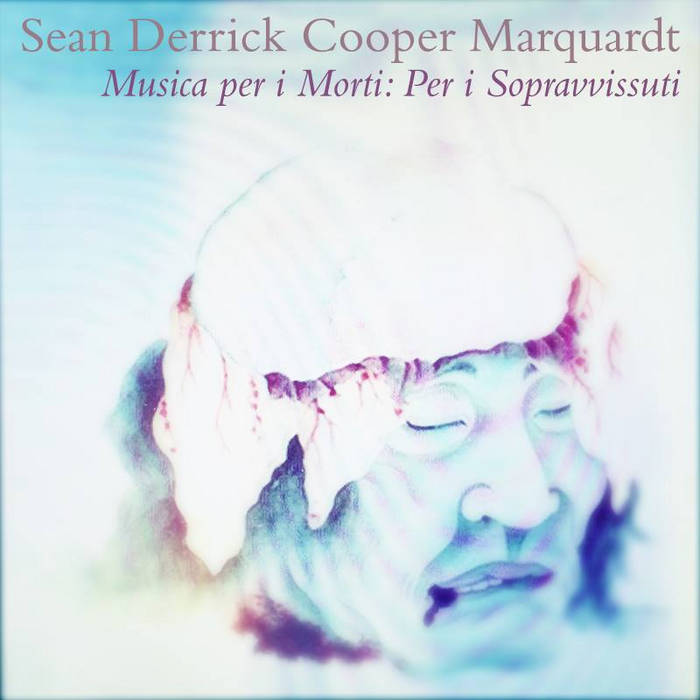 Sean Derrick Cooper Marquardt – Musica per i morti: per i sopravvissuti ‘ released on △NIM△ PH△RM

When the album was released for the very first time it was celebrated by having a sneak preview live on a radio show on 20 December 2014 called ‘at the water edge’. A radio show by the amazing Rebekkah Hilgraves   who does an amazing job with her interesting and entertaining broadcasts, but is also a talented producer over at RadHaus!
You can hear this broadcast and see images  by Patricia Holland-Mortitz (who also wrote the poetry for this release) in the following vimeo movie:

I’m sure the information presented over here might have been overwhelming,
and trust me, I tried to keep to cut a lot just to keep it readable, but with all big special projects there is a need to feed the planet with important info. But as we are here on a blog to discuss the most important thing of all; the music.. I present you here a personal walk-through through ‘Music for the dead’ in YIKIS textual form, decorated with videos of other interpretations of the music than on the album.  For the ease of it, the track titles discussed are the ones in the English language:

1 I Love Watching the Movement of your Limbs when they Tremble from the Wind’s Gentle Caress consists of sweet trembling in sound are cradling the ears as if a child is being surrounded by a fond memory of safety and comfort.

2 Things that never Die have never Lived
The music over here has some louder parts that function as a bleep to make the love and kindness heard to the greater gods in the above world. If you follow these tones down you will find more niceness that the ears will be grateful for to hear.

3 Music for the Dead is the ultimate comfort with dial up tones to communicate with the ones we love in the after life. The sounds softly brew a base of warmth and a kind form of fragile-ness. I can imagine an old phone that you have to turn to dial; doing this movement all by itself in a soft breeze in a peaceful afternoon on a summers day. It’s very pleasing to my ears and mood, but probably also a good audio gift to ones listening in from another realm.

4 Offerings of the Oracle
the music here becomes a little bit more busy, a soft and kind meeting place for sounds that matter; soft brewing communications that only a few people could translate, and yet it is sounding as recognizable as a inner circle at your own close circle birthday party. It’s a cozy familiar feeling that this track gives, making me feel comfortable and in a strange way loved.

6 If you are not a Fish, how can you tell if the Fish are Happy?
the title of this track is making me think, which is a good thing. The music covered under this title swims along nicely with the thinking pattern although it might not give enough time to get all philosophical as before (just like the memory of a fish) the music of this track disappears in a short time period.

7 Only the Sufferers know how their Bellies Ache
this music chapter comes across more  living, featuring sounds that could be a reconstruction of sharp and high birds chatter, which gives an certain exciting element to the audio. It’s as if the music conveys that there is hope and new beautiful things to get the minds focused about.

8 Kind Words Conquer has giving me a strange feeling upon listening it. On one side there is a brewing sound that is nice and pleasant, but there is also a legendary melody performed by a clock of some kind that sounds a bit twisted; perhaps a little moment of realization, or a slight shout out of frustration in a sea of a calm mind..

9 When Eating the Fruit, Remember the one who Planted the Tree becomes excessive in the bird chatter for a bit, giving way of exciting ear penetration by high tones before returning to a more calm shape and form.

10 I Slept on your side of the Bed because the Pillow smells like You
is the first track that features a voice as an instrument. There is some talking going on, but the main attraction is the Ohm-ish vocal relief that teams up with the sound of a meditational bowl as if in search to gain wisdom and clarity.

11 If you were born without Wings, Do nothing to Prevent them from Growing
goes on a much calmer pace, giving way for the sound of acceptation, something that softly shimmers in a nice peaceful way.

12 The World According to King Karl brings strange music that seems to have come through a connection with a time hailing of nostalgia. It’s like listening to snippets of a distant memory, with close up familiar sounds to get the listener in a confidential state if mind.

13 Two in a Million is the last chapter that seems to switch of the work in a moment of realization that all perhaps might have been a dream. We can hear a soft wind catcher glittering a calmed realm in which a voice tells us some crucial information in a pure moment of honesty and emotion, steering this album to an end that was as promised dramatic , yet also of an intriguing kind.

It’s in the end an overwhelming experience really,
and you will be invited to hear / download  this drone drama from the following links:

Sean Derrick Cooper Marquardt – Musica per i morti: per i sopravvissuti
https://gzmusic1.bandcamp.com/album/musica-per-i-morti-per-i-sopravvissuti

Another personal way to know more about Sean Derrick Cooper Marquardt and hear the full length verion of ‘Music for the Dead’ is by tuning into this interesting  conversation between Anna Bromley and the creator of this drone drama while walking in the park.

—
*- “Accidental Guitar” is a holistic and grounded concept that includes three main aspects. The first of these is the creation of sounds and sound worlds by combining the guitar with distortion effects – a type of “routing” or “mapping” technique where the musician does not lose himself, however, but instead works in a deliberate manner with the tools available to him. The second dimension of “Accidental Guitar” is improvisation – an approach that Cooper Marquardt has chosen, systematically rejecting predetermined choreographies and all forms of rehearsal or planning. This applies not only to live performances, but also when making recordings in his studio. Finally, the third dimension to this concept is the specific situation that the musician encounters when playing: the atmosphere and setting, the persons, conditions and moods present in the space in question lead to a contextualisation of his music.
— above information taken from an article on Dangerous Minds

**- For more information  about Patricia Holland Moritz the author of the special written ‘Music for the dead’ poem, feel free to visit her official blog:
https://patriciahollandmoritz.wordpress.com/
like her on facebook  or perhaps get your hands on her latest publication ‘Kältetod‘, which is a novel about a detective named Rebecca Schomberg.