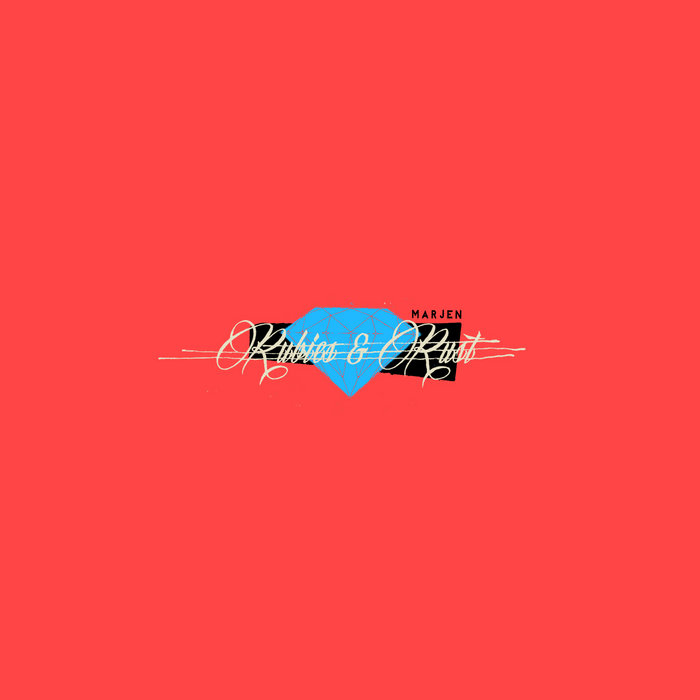 We at YIKIS receive lots of review requests and it’s a bit like an overloading pot in which we are all drowning away. It’s unfortunate that a lot of music submissions are getting drowned in a overloading flow of spam and serious hand written requests. The most difficult thing is our policy to listen and review anything that will come our way, as of course we all have our preferences, or ideas or well… So basically the girls in the office who are trying to save the good apples from the bad ones had given me this album by Marjen named Rubies & Rust. Why me? No idea. Upon listening it became clear that it is an album of hip-hop/rap music which is something I do not know anything about or normally would listen; so excuse me if this review isn’t state of the art or to the point; as I really have no idea what I’m talking about.

Work Forced feat. Bakus is a slow beat with on top of it someone rapping about casual things like the sound of a whistle and dirt on his shirt. Dropping names of things like ‘cellphone’ and spotted socks. I just imagine the rapper sitting in a work cubicle at some massive office floor rapping his work time away so he can pass the time spitting out words instead of going through the office paper works.

Wet Sandwich feat. V8 is another slow hip-hop thing. This time  the rapping talker talks something with the genius rhyming words of ‘smelling death on his breath’. To be honest that probably means that some mouth hygiene is needed, as a breath that smells like death for sure isn’t pleasurable to smell for the people close to this artist of words. For us listeners at home its okay as they didn’t bring the ‘smell the music at home’ to the dolby surround audio home stereo equipment set yet.

Family Tree feat. Morbidly-O-Beats is getting a bit funkier, probably thanks to the swinging beat loop that the word man is rapping on top on. The theme of this short ‘song’ is how to get high and preferable drunk at the same time. If you are searching for words about big world problems you aren’t going to find them here; just smaller private world problems are discussed here. Where is my booze, I really need a drink… No seriously, where is it?

Rap Like A Drug feat. Bakus is another opportunity to showcase some rapping skills on top of a steady sleek beat. It’s difficult for me to follow what it’s about other than that it’s rapped like a drug… Perhaps that’s why I can’t really follow it because it makes me feel drugged & unconvienently unable to concentrate on what is being said. But on the other side of the story; it sounds quite solid: professional even!

Marital Aide feat. V8 starts with some weird intro of sound before introducing the voice of someone who seems to have come from hard side of life. For some reason I feel like saying that this sounds as if we are dealing here with some real ‘gangsta’ style, as the voice seems to cover the hard side of life and the music has gone for a dramatic darkness in sound. I do not know anything about rap, hip-hop or anything that is close to this genre; but I would consider this something people would like to hear when cruising with the car in search for a hooker…

Dog In Heat feat. Morbidly-O-Beats  bings another beat, it swings nicely and the rapper is hip-hopping away saying things like that if we meet him up in the street he would treat us like a dog; and then a whole salvo of dirty things follows that I would never do to my own dog. Fist f*cking?

After these six tracks the album brings them again but this time as instrumental versions; basically inviting your own rapping & hip-hop skills to spit some words on those beats.
This was what I came up with word-wise:

I’m working at my job
running for a cop
taking a piss while
eating a wet sandwich
hang myself from a family tree
I’m on a bestiality fish fucking spree
rapping like my dog
put my load in a sock
Cause I’m in heath
rapping on a beat
with my horrible breath
that smells like death
yo!

here is the link to the album:
https://thisishellola.bandcamp.com/album/rubies-rust