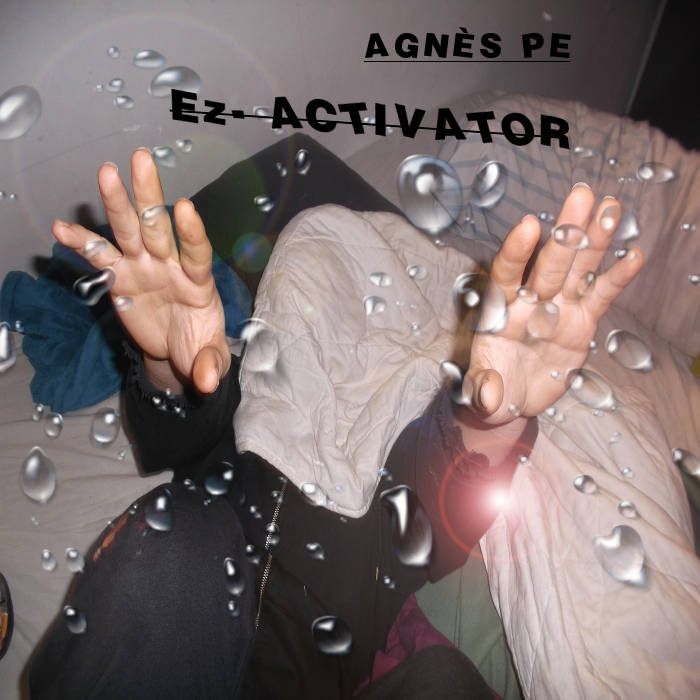 Agnes Pe is one (if not ‘the one’) of my personal favorite experimental electronica artists out there. So it doesn’t come as a surprise that when the news had hit my head that she has a very new album out; i went hysterically berserk from pure excitement. After waking up at the intensive care at the nearest hospital and after a few additional checkups had arrived back at my music reviewers office I was so ready to hear it, so that is exactly what I did. Who could blame me? My good taste in music certainly could not blame me a thing, as of course the music of Agnes Pe was indeed spoiling them with all the delicious sounds that I had craved so much that it almost killed me!

^ me, the agnes pe super fan… in hospital

So what’s the album like? Well it’s pretty amazing; Agnes Pe seems to have gone for a fun laboratory look and feel, which of-course is surprisingly fitting for her excellent experimental electronica arts and crafts. With my eyes closed and ears wide open I saw brewing bottles of originality, smoke and liquid sparkles in a hot bed of clarity. I mean this colorful sight of an inventors sound lab might be messy from the first look, but Agnes Pe certainly has it all under her thumbs (and the other fingers) as it is all played and programmed in such a way that every single sound, each and every potential new invention is well directed to form an arrangement that will not only satisfy Agnes Pe’s toughest die-hard fans, but probably also generates shit loads of new ones!

^ a few fans of Agnes Pe

This album is of course one of her bestest, bringing musical melodies that you might recognize in a form that gives music a complete new shape and meaning. The art of these tracks are that Agnes Pe uses all these sparkling noises, bubbly squeaks and loudness that are of a sweet and ear candy kind. It’s hard to believe it when you are reading it, but when you hear the album you know what I’m blabla-ing about.

^ sounds are being made in the lab of Agnes Pe

Agnes Pe’s secret music laboratory is simply a place where happy colorful things happen; a place where fax machines become friendly monsters, Christmas-bells become drunken trumpets, computer errors become steady beats and random sounds become a carnival parade of hilarious and happy fun! It’s a real party this new album by Agnes Pe and I recommend it not only as a fan, top reviewer or as someone else; but I recommend it as a person who knows what you want and need right now. You need this album by Agnus Pe in your ears and in your life! Please do listen, even if it’s just for her version of ‘Wrecking Ball’ which is so epic that you won’t even believe it until you hear it!
Tune in and be amazed, bewildered and entertained to the max!
https://agnespe.bandcamp.com/album/ez-activator
<KN>

p.s. in case you might have been on this place before.. It seems that I have reviewed this album already quite a while ago.. But the blast of excitement must have erased my memory making it again possible to listen to this album as if it is indeed brand new again!