Posted on September 7, 2015 by kainobuko 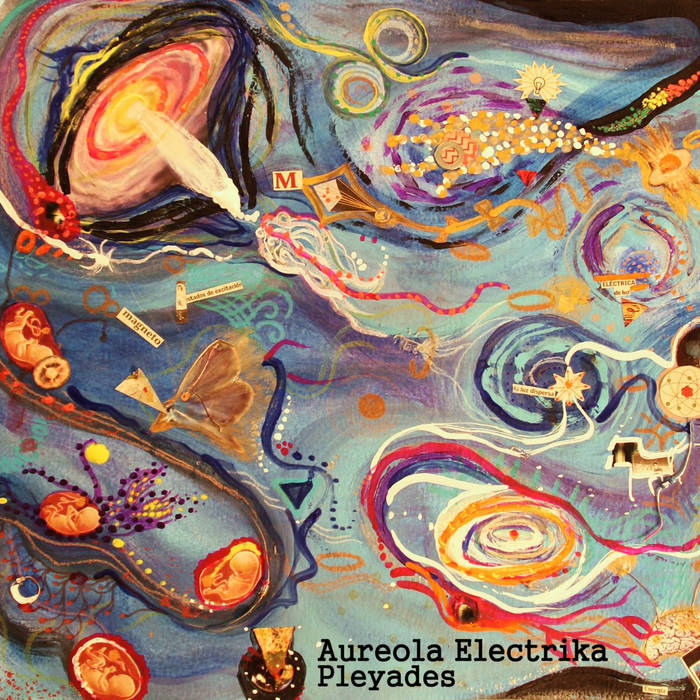 ‘Pleyades by Aureola Electrika (Analia Bazán & Maia Koenig) is an album as well as an invitation for what the professionals call a ‘psychedelic audio trip’. It’s free to download and enjoy, so don’t stand in line but just hop in if you have some time to spend in the abstract entertainment. You can find a link at the bottom of this text, or you might want to click the artwork above to get instant audio action. You might also opt for reading along, but then you might as well tune into the music at the same time. Have a nice trip!

Cumulo Albeito opens up with music that slightly resembles the theme of the old Startrek series. It’s just a hint, something that sets the idea of us being together on board of a luxury space ship ready to travel through a sound adventure that is of an alien order. When the melodic happening is over I feel that the real journey starts. A crisper fresh sounding tick seems to be our guide through a humble sounding space in which backdrop sounds of an unknown order rhythmically step in like an interesting unheard of alien monster. It transforms from upfront in to a mass that starts to collide and flow like a lucid liquid that takes us away into the wildest space spectacles of all time. Once the space is fully occupied the heartbeat of the universe beats it’s rhythm while synthetic lasers flush excitement down its grotesque lanes. It’s all moving, speeding, melting, concentrating and collapsing into sounds not yet heard before in our earthly realms. The climax comes in this new found sound world as it’s singing in an unknown language that feels like a synthesized howls of kindness and longing.

With ‘12 años luz de diametro’  the scene continues by filling up the voice with the depth of unknown space and abstract darkness. There is no peace here as the sound of something that resembled a violent electric machine gun shoots itself in this void. Here it’s picked up and absorbed by a bouncing sound sponge virtually celebrating the after bites until the music becomes a honest footstep of minimal proportions. Here the scenery changes for a bit as human activity seems to flop in; voices, abstract and yet so clear set the scene here. In all silent one of them sings a song like a sentimental cat howling a song probably for all other cats to hear. The only companionship is a clock-ish melody that seems to show that it’s the time of the day that the crazies come out.

Like a fairytale the curtain opens with glitter and relief, followed by a dreamy mysterious vibe that sounds like flannel curtains with hidden dream-catchers inside. It’s a portal to walk through and then have to sit down in to take a trip that consist of slow but easy sliding from one abstract performance to another. I can see a bumble bee squeezing it’s bumble ass on a bouncy mushroom, a robot waving us goodbye as the music seems to speed up like we are going downhill over a railway line in a pretty bizarre scenario of theme park intoxication with a spaced out theme. The rails crack, guitar hints and a tremendous amount of reverb sketches a space that is big and dark and yet claustrophobic like a tunnel with just a few meters eye-sight. After a while the train ride ends up in what seems like its destination: A secret laboratory in which heavy bass frequencies are buzzing up our bellies to deliver a tingling vibrating sensation.

Suddenly in ‘Tzab-ek salida heliaca’ we sit on a child’s tricycle to bike for a little bit. There are more tricycles ringing with their little tricycle bells until some of them break off. The tricycles aren’t made for adults so they seem to collapse under the weight of our behinds. The broken pieces of tricycle are everywhere trying to reassemble themselves with the sounds of their broken parts banging in the audio location. There is a bit of avant-garde flute playing in the backdrop to entertain while the pieces attempt to reassemble but it’s no use as a final hissy noise sticks up a middle finger in the air. I guess no children’s tricycles for us, but there is a link which you can click for an instant audio adventure instead:
https://aureolaelectrika.bandcamp.com/album/pleyades
<KN>