Posted on September 7, 2015 by kainobuko

Hello there dear reader, my name is Jim… Can I borrow some of your time?
Ah, you were in search for some music?
Wait, let me think… might we calm you down and make you smile with music and a video? Something to welcome you at this post before continuing?

Ah, that’s better right? Feeling all smiley, happy and loved, right?
That’s the power of the music of Twink, catering for the young and the old a brand of music that is underlining big lines under the word ‘toytronic’. In case this is the first time you heard Twink, you might want to know that this is a project of a devoted musician of this lovely cute sound named; Mike Langlie.
You can see and hear him in the following recommended video if you want, as next too that it’s nice to see and hear him; he also has something important to say and we believe it might even interest you. After all you came here for music, right? Are you ready?
Are you ready too, Mike?
…
Okay Mike says that he is ready to introduce himself and tell his story, so please feel free to click and listen up what this friendly character has to say:

Ah, that was nice. As you can see and hear the creator of the cute and lovely sounding toypiano band Twink, is quite similar as his musical output; quite lovely.
….
What’s that?
….
Oh sorry Mike, I didn’t want to embarrass you by saying that; I thought you had already gone.. You’ll leave now, right? I might say other nice words of praises.. you dont want to get all embarrassed with a red face.. so please hop along, okay?
…
whats that Mike?
…
yeah exactly.. hop along like a cue fluffy bunny 🙂

Okay dear readers.. I believe we are alone now.. Mike has gone… It’s between us and you know. Wasn’t it nice to hear and see Mike talk?
But next to meeting the man behind Twink, did you pay attention to what he had to say?
…..
Yeah that’s right, he is doing some kind of campaign to raise money to cover the pressing costs of the vinyl version of his newest album named ‘Dust Bunny’.
I’ve heard this album and I would say it’s very good! It’s all that Twink is known for, but also strangely has a more grown up sound to it. I had to compare it as an album that shows from the start a rebirth… It’s first as if the dust is being dusted off to reveal the music of Twink as if its an egg… A pretty cute egg… That then breaks open to reveal a little mini chick that than grows up like a beautiful feathered chicken that glows like ember…
What? You want to hear it for yourself? Well ha, I kid you not; your wish is my command as by magic you can hear this album by clicking on the following beautiful looking artwork done by Kate O’Hara :

It’s really an adorable must have album if you are into this combination of toys and electronic cuteness. And if you payed attention you might have noticed that this campaign is not only good to help Twink out to press these beauties on vinyl, but also (lets admit) MOST IMPORTANTLY yourself! It’s good to help yourself, especially when there is a Twink involved…

No… Not this one… I mean the real Twink:

For a really good price you can get this new vinyl record, including a CD version plus all 6 Twink CD’s. Or download all the Twink albums. Or get this all with a very limited edition of a 7inch lathe cut record with 4 bonus Twink tracks on top,
or all this with a set of original pling plong cards that were used to make a couple of songs on this new album.. I know.. I feel like I’m on television now on the shopping channel,
but I’m sure even there they don’t have such a good deal that Twink is offering in exchange for your help. It’s basically a case of you buy the album and you get overloaded with a whole Christmas pack of other Twink albums or goodies! Or if you don’t like Christmas, you can just say its for your own (or a friends) birthday! 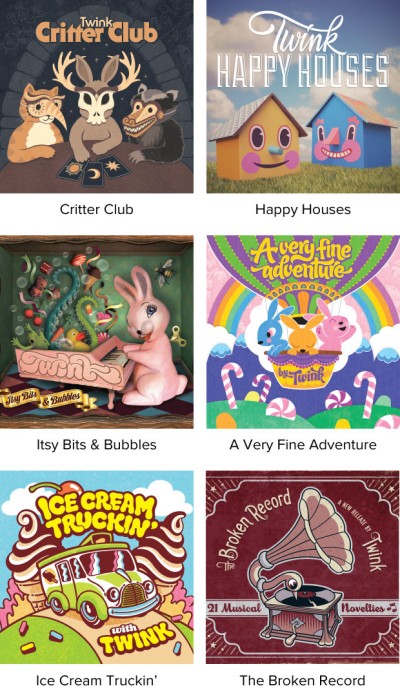 ^ these albums could all be yours if you order a copy of the ‘Dust Bunny’ vinyl.. buy one get 7? Wow that’s a deal you dont hop away from!

ah… What’s that? … Mike? You are back?
The pictures of the albums in this post are blurry?
Sorry about that Mike.. Uh.. No I can’t change it.. We are a blog called ‘Yeah I Know It Sucks’…
…. What? …. Ah.. The bonus vinyl?
…
People at home.. Mike wants to share a picture of the limited bonus vinyl:

…. What’s that, Mike? …. Yes, Blurry too…
Oh… Yes… People at home, Mike also wants you to see the cute and unique ‘Pling Plong’ cards… But you know what, I think it’s best to just drop the important link to Mike’s campaign from where you can read all the info, all the deals and see pictures in a much better quality! Here you go people, do recognize a good deal when you see (or hear!) one:
https://www.indiegogo.com/projects/dust-bunny-vinyl-record-by-twink#/story