Tvärvägen – This river so red (video)

Posted on September 8, 2015 by kainobuko 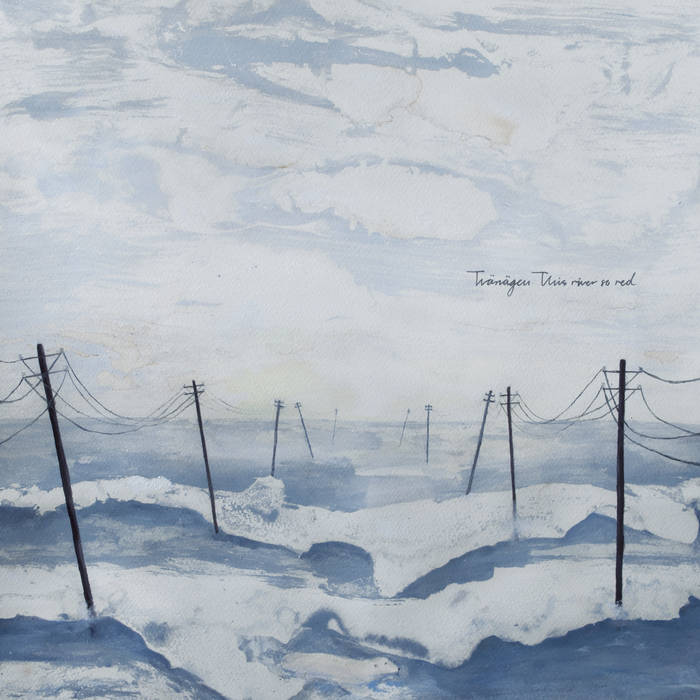 Tvärvägen is a project by a multi-instrumentalist named Henrik Öhberg. In case you don’t know what a multi-instrumentalist is; it’s not a mental nutcase with multiple personality disorders; it’s a musician that is able to play more than one instrument. It’s a bit of a vague term; are two different instruments enough for the term, or is this title earned when an artist is able to play any instrument that he or she gets handed over? Also does this mean that these multiple instruments are all played at the same time, or might it be a case of one by one?

^ pictured above: ONE instrument named ‘Cowbell’

Let’s not think too much about it, as it might multiply our mental disabilities. Let’s skip to the point. A point of no return. It appears almost at every sentence. Did you see it, the point was there gain. See, another one… Three of them. Pointless you say? I do not agree, it’s more a case of multiple points in one text. But what’s the point, as it might be just a dot?

Hmm… Let’s get to the ‘dot’ than.
If there is actually a ‘dot’? Is that a dot? A dot with a half race way road above it? A half circle going towards a line and then a dot underneath it?
I guess this ‘review’ isn’t going anywhere, which is not surprising as it doesn’t really have the capabilities to do so. No arms, no legs, no rubber boat to the rescue… Only dots or points… Lots of them.

Tvärvägen has a video out for his new single from a forthcoming album. This album will be available from the 18th of September and has the same title as the song that this video is made for: This River so red.
It is an inspiring title, almost like a poem written in one single minimal line. The music itself however doesn’t contain poetry, but (how do the professionals call it?) music. It all makes perfectly sense as otherwise Tvärvägen would have been made by a multi-poetrymentalist and not a (as which is the case here) multi-instrumentalist.

And we got to give the artist credit for its musical abilities; it’s a track that sounds as if it’s been performed by an orchestra. If Tvärvägen indeed plays all the instruments that are used in this song at the same time, I must think he must be a real fanatic looking one man band wonder; a real sight on every fancy fair and music parade. However it’s probably not the case; as the music seems to be made in a delightful way, calm and kind; not at all rushed or improvised on the spot with instruments triggered by odd body movements.

Let’s talk a bit about the video, as you already had wasted a good moment if your time with nonsense anyway. The video is done by director Mats Udd who has (according to the promo mail) previously worked with artists such as First aid Kit, Those dancing days & I’m from Barcelona; all acts I’ve never heard off but do sound band-name-wise rather hilarious. They really should join together for collaboration one day. Recording a video in Barcelona, with focus on the dancing days and then off with broken ankles and back to the inside of the First aid kit.

This video however is serious business. That’s why I take it all so serious. Serious, serious, serious.
It also looks pretty expensive somehow. It must be the close-up camera shots of actors dressed as bugs, a frog, worms and other creatures in the woods. It also comes across as expensive because of the impressive film shots filmed from high above. Did they hire a helicopter, a plane, an air balloon, a zeppelin, or perhaps someone sat on the back of Superman to film this shot?

It’s basically a documentation of a lake or a river with nature around it, and strange hooded figures walking around with torches and flash lights. Might they be the wandering lights, the spirits searching for a spot of red? Or perhaps it is a dot? The thing is.. The water in this video, either it being a lake or a river; it just isn’t red. But could have been the color ‘red’ with a little Tweaking in after effects… And of course there might have been lots of artistic reasons for it not being red, but well I thought for a title track named ‘a river so red’ that it should have been a top priority within this video. And yes, I did feel slightly disappointed about not being served a red river, so much so that I had thought of a solution.

A red marker pen! Yep, just color the river red while the video plays on your screen, only draw on top of the parts that are water as you don’t want to mess with the concept. It feels good, and creative; coloring the water red as it should have been… Oh look there are the dots or points again. I guess I better leave the video here so you can start to apply your red color.

If you have an interest in hearing and obtaining the complete album,
feel free to pre-order it at the following links:
https://www.normanrecords.com/records/154815-tv-rv-gen-this-river-so-red
or here:
https://feederrecordings.bandcamp.com/
<KN>

1 Response to Tvärvägen – This river so red (video)