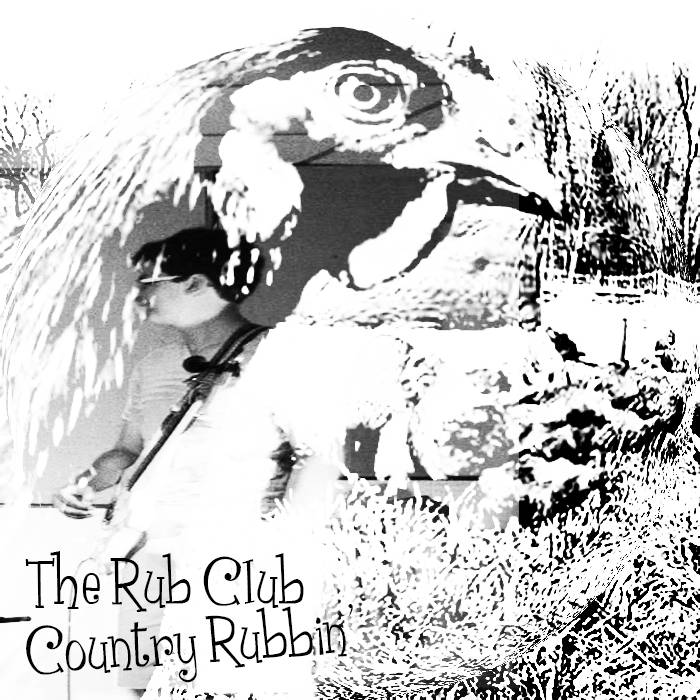 The Rub Club takes joy from rubbing rubbish in people’s ears. Don’t worry as it isn’t the stuff that has been rotting away in a black bin bag with left over foods from last week, but it is actual music. It might not even be really rubbish as it’s meant to be sounding like how it is. It’s in a way ‘art’ that your critical uncle might say ‘what a shit’ just because that’s exactly what the artist had in mind; provocation, artistic rubbish rubbing until it gets glorified in a museum for the commoner to mumble over in total misunderstanding.

But yet, the Rub Club might actually be catering not to the artistic high society crowds champagne drinking arty farty freaks, but more to the people who you might be able to find line dancing in the weekends & milking cows in the afternoons. But it is just a smoke screen, a camouflage and almost a form of commoner espionage. It’s comedic without delivering the punch lines, colorfully rubbing their somehow seriously piss taking music in these rowdy cowboy places without anyone laughing. It’s art that is so good that unknowing public will have no clue that it’s the band they should have thrown their beer bottles and cans too. The band are clowns disguised as a proper band that do actually sound as if they can play, but use their musicality to mind fuck with their audiences. It’s obvious and yet you just know the public just might be oblivious to the Rub Club’s real intentions.

The band does it’s best to cover their marks of being a comedy undercover band in a smart way; delivering their tunes in all kinds of ways that might trigger and please all sorts of peeps in the pub, saloon and booze country club. From songs that might trigger the audience to stick up a lighter in the air and wave it around in a drunken daze, to ones that invites drunken feet to dance around while throwing cowboy hats in the air. There are party anthems, ballads, country rock, whiskey versus vodka tunes and easy listening; but it’s all done in such a way that if you are at a live show enjoying their music and songs; you’ll probably end up being the laughing stock between members of the Rub Club at the end. It’s all good fun really this rubbing as even though it’s not recommended to take them serious, the music is actually pretty good while at the same time it’s being sabotaged by the songs.

What fascinates me is what it is that brought the Rub Club together to do this kind of persiflage music? As they are actually pretty fucking good, but chose to deliver rubbish for the sake of rubbing it in, without people noticing that they have been had. It’s an art that might get people beaten to pulp if not delivered in camouflaged perfection; and I believe that the Rub Club has managed to sound so real and authentic that they will get away with taking the piss on stage. It pretty much deserves respect, not only for their music but also for their lack of fear from the people or bands that are actually serious about their thing. The sound of the Rub Club on this album is like a large but camouflaged middle finger pointing in all directions without anyone getting it or be offended by it. It’s an ‘art’ that we all should take our cowboy hats off for. Hear the album over here:
https://johnsnoiserecords.bandcamp.com/album/country-rubbin