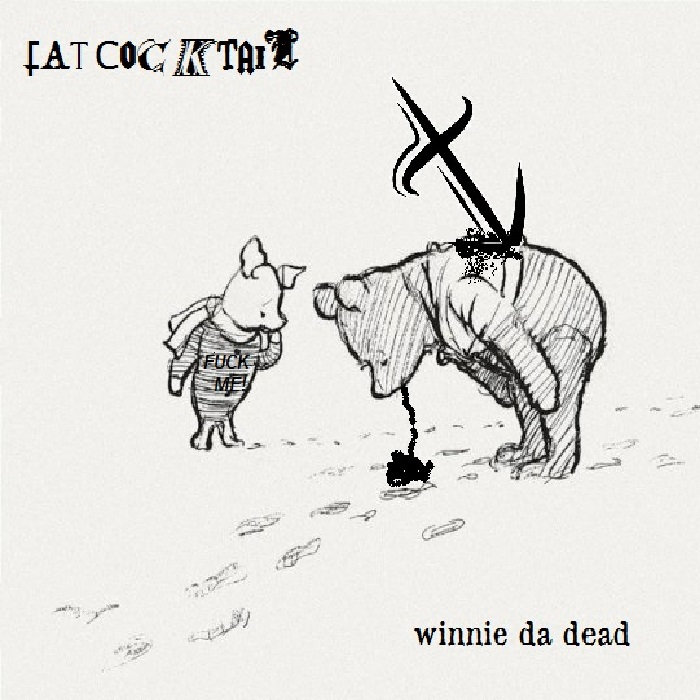 Winnie Da Dead by Fatcocktail is one blow of a controversial mess that all the professional music reviewers are ignoring. They pretend to not see this release, never received an email from Fatcocktail with the link to this album, or simply just looked the other way to check their facebook updates and left over emails. It’s a real shame as Winnie Da Dead by Fatcocktail should’t really be ignored: It has all the thrilling attributes to shake up the establishment, to make the wallpaper on the wall fall off, and to slightly annihilate your home stereo equipment with a well-directed heart attack.

Fatcocktail is Dr. Igorian (from Nepal), a real doctor specialized in making music with lyrics, mixing and programming it (to hell with mastering!), he also does the bass, guitars, voice and synth and the cover art & sending out the promotional emails of course. A fine hard working self-crafted artist, doctor and musician of the hard working kind, how dare they ignore his product made out of blood, sweat, tears and vomit?

The best thing of the Winnie Da Dead album is that you don’t even know what it is that hits you, but you know that it is hitting you: hard! This album has (lucky number!) thirteen tracks and all are bombastic and all over the place without sounding like anything that had been done before. This might be a reason for professional reviewers to ignore the album as ‘to whom must they compare this earth shake of a release with?’. I certainly can’t name any artist doing what this Fatcocktail is doing, but I got to admit; I’m slightly deaf and in general not very interested in music.

The music on Winnie Da Dead is full of happy apocalyptic moments that you simply can’t point your finger at. From one second there is beauty, the other second it’s a total waterfall of excessive puke, and yet another sexy second it’s an intimate intimidation of a warm voice kind and friendly, and yet another, another second this kind voice is playing heavy guitar with its tongue and rips off your head with its teeth. These seconds after seconds just keep on going, and sometimes seconds become longer and turn into minutes. In a tune named ‘STFU’  it is the case that the tune becomes one pounding blast that might make you want to run to the nearest drug store to shove down a whole pack of paracetamol to encounter the upcoming headache. But this headache is worth it and well wanted, cherished even!

Armed with enough codeine in your system you might even have a real blast discovering ‘My Teenage Truth’ which is cutting edge singer and song writer material that might be expressed by a chainsaw, distorted dentist tools and of course Fatcocktail swallowing a microphone and shitting it out from the backside again (all for the sake of the art of music, eh?)

Fatcocktail simply doesn’t disappoint if you like it hectic and heavy,
it’s a nonstop punch in different directions, flushing the audio waves in odd directions, corners and (believe it or not) at certain times it gives me goose-bumps. Till the Sunrise’ has an amazing flow to it, very futuristic, great bombastic beats and psychedelic psycho material that will make you thirsty for gasoline with a tea spoon of bloody liquor.

A-a-ah! Is like the right kick in the crotch, the perfect amount of well-directed flow of aggressive vomit that comes out at times to fill up your ears completely with yellow shit. If Winnie da Dead wasn’t dead, Winnie might have put his paws in your ears, thinking it was honey…

Fatcocktail continues to be violently happy, by outrageously shitting out a colorful blandness of painful almost opera-worthy nightmare that might turn rich people in their spaceships to leave earth immediately. It’s having quite an impact over here at our office too, as the whole building seems to be evacuated because they simply couldn’t take this ‘music’ anymore; the pussies.

The last song is Requiescat in Pace’ which of course might be considered the highlight of Winnie da Dead’ that wishes us a fine rest in peace when the entire ear bleaching has been done. How and why on earth would any professional music reviewer ignore this master piece? They simply don’t know what they are missing!
https://fatcockrecs.bandcamp.com/album/winnie-da-dead
<KN>