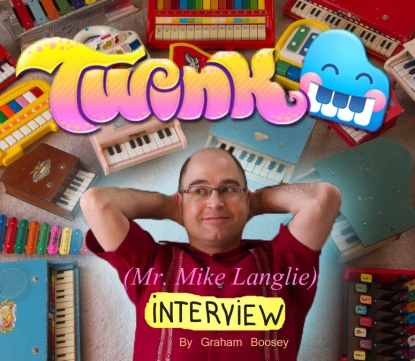 Hello there. My name is Graham and for the past few years I have been avidly reading YIKIS, so it’s a real thrill to start writing features for it. I am looking forward to sharing some wonderful music and musicians with you in the coming months. What better place to start than with Mr Mike Langlie. As Twink, he has taken the mundanity of my everyday life and sprinkled it with magic. He is definitely one of my favourite musicians of all time, creating music that is equal parts cute and terrifying, regularly releasing new adventures in sound. It was a real honour to have a chat with him, he is genuinely a really kind soul, and, if you get the chance, well worth further investigation. He has a live IndieGoGo campaign for his current release, a 12” Vinyl LP called “Dust Bunny” which can be viewed here – https://www.indiegogo.com/projects/dust-bunny-vinyl-record-by-twink#/story

Twink – Doing good, enjoying the start of Fall. Yourself?

I am too, I hate summer with a passion, but I am a miserable man

So first off, I like to know how people got their start in music
Do you remember your first project or experiments?

I’ve always been interested in sound-making and recording in general, and even as a kid I experimented with building layers of field recordings, random radio snippets and banging on things. Once I got my first Casio keyboards and cheapo Synsonics drum machine I was making weird synthpop type stuff with a primitive Commodore 64 sequencer app. 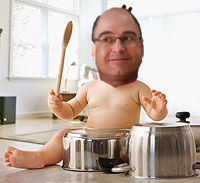 Pictured above is Mike (Twink) as a kid; banging on things

Sounds wonderful, do you have any recordings?

I actually made a bunch of home-dubbed cassettes with covers that I gave to friends and mailed to other electronic musicians I found out about. That was a lot more difficult and like a real discovery in pre-Internet days. I don’t have any tapes left of that early awful stuff, but I wouldn’t be surprised if it exists somewhere.

I shall have to try and track it down 😉

So, when did Twink come to life?

That was a long time later, and after the point when I thought I had given up music for good. In college I was in ridiculous (but fun) electro-industrial bands, one of which also featured an experimental cellist who later became my wife! She and I had a a heavy goth band with different guitarist friends for several years but never found much appreciation in the local music scene. Dealing with so much resistance fatigued me and I became disillusioned with it all. I thought I had done everything I could do and sold all my gear, except for one toy piano I bought on a whim.

After a good break I started noodling on that and suddenly got excited about just making music for myself, whatever I felt like. It was nice to have a limited sound palette and number of keys to see how far I could push things. It was immediately lots of fun and woke up a whole happy-go-lucky side to me that I never felt appropriate putting into my music before. Over time I started picking up more toy and electronic instruments and building a sound around what I always truly liked. Cheesy drum machines and keyboard sounds, weird noise-makers, etc.

Anyway I thought I should give this a go and started posting early tracks online. I got mostly positive reactions and encouragement so I decided to try making a whole album of it. That became the first Twink CD and picture-book.

And a beautiful creation it was!

To me, Twink sound like something that should be on a kids tv show, but at the same time, has a lot of depth, and is actually mildly terrifying, have you ever purposely aimed at any kind of audience?

^ pictured above; a example of an audience

At the start of it I had a difficult time figuring out how to present it. It’s always been about entertaining and expressing myself first, but I figured it had to fit some kind of genre for people to get a handle on it. Since it was instrumental, somewhat simple and rather cheery it made sense to consider it sort of kids’ music. At that time several alternative bands like They Might Be Giants were delving into that market so it seemed to be open to experimentation.

I like that Twink is able to be appreciated by a very wide audience, and have gotten great feedback from my friends’ kids, so I kept the “children’s music” label for a while even though I was exploring outside of the proper “box.” Eventually I stopped calling it that and let people come to their own interpretations.

For me, it appeals to such a wide variety of people, and hopefully sited like A Closer Listen picking up on it represents that

The first four or so Twink records came out on labels, but since then you have self released, when was it that you decided you no longer liked having money?

Ha, that’s been the case the whole way through! …

^ The sold out second Twink release consisted of 3 mini CD’s and a comic book; a great proof of physical creativity!

Twink is so lovely by providing many paper piano’s for free for you (or anyone else) to build yourself! click to see all the options!

The first CD and picture-book was a big expense and I couldn’t have done it without some kind of support, both financial and in finding an audience. I met some guys in Indiana with an indie label called Dyspepsidisc that focused on eclectic stuff and nice packaging. They helped so much and really got the ball rolling for me.

Sadly like many indie enterprises they closed up shop eventually and pursued other things. I found a new home for the first album and approached other small labels for the next few. I think each has been a really good fit for the particular release, but after a while I realized I could probably do everything myself. Especially as the web was becoming such an avenue for direct-to-fan distribution.

^ to be honest; this is super cute!

But even on the labels my albums barely made their pressing costs back. My stuff is in a pretty limited niche and audience that doesn’t support making a living from.

I have always got from you that sharing the music is more important anyway, for such a niche act, it comes across as very honest
to be honest; this is super cute!
That’s really the case. I have no illusions of being a rock star or becoming famous from my hobby. I’m still surprised and very appreciative that anyone gives it a listen! The sales I do get are helpful to keep making CDs (and now a record) to send out in the world.

Speaking of that record, it really is an unbelievable beautiful thing, physically and aurally, so to speak, tell us a little about Dust Bunny and the indiegogo campaign

Thanks, you’re very kind. Along with my fascination with making weird sounds as a little kid I’ve always loved records and wanted to make my own someday. It’s something I kept in mind even when CDs and then MP3s totally killed that market. With the recent vinyl resurgence I realized it was now or never to try doing one. Even if I didn’t sell any I was excited just to have my own copy! … 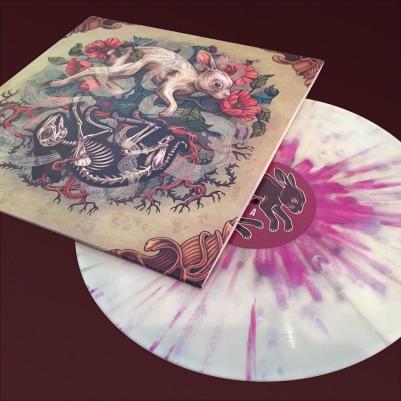 Obviously pressing vinyl is rather expensive, and a crowdfunding campaign made sense to try to recoup some costs and build awareness of the release. Thankfully it’s gone quite well so far, much better than I expected. I’ll still be in the hole for a while but the preorders help a lot.

When did you decided that Twink would be heavily themed around bunnies by the way?

That just naturally fit the kind of silly, happy sound at the core of it. Plus it might surprise people but I’m not actually super-fond of rabbits, so those feelings of seeing them as little monsters in a cute disguise also fit the odd moods and spooky directions that the music takes.

Nice! Sorry for posing a picture of your new record next to two glowing rabbits then

Ha, I loved that!

You have to face your fears in life, you know?

Indeed, hence why I’m planning to get on a plane to Boston next year, haha

So, a little about you my friend

^ not Mike’s Gingerbread house, but one of the DIY Twink Happy houses that you can download and print & build yourself! Nobody should be without a happy house thanks to Twink! (click, click)

And have a hellishly long commute

Does that cover it?

That’s my life right now! I’m also a graphic and web designer with too many vintage toys and a couple of calico cats.

Sounds great! Do you remember getting an email about 8/9 years ago along the lines of “Excuse me, how do I make music?”

Oh yeah…I’m always glad to meet creative people and more than willing to share what I know.

^ pictured above; the moment that Twink received a mail from a fanboy asking how to make music..

And I am very grateful you took the time to reply, I had no idea what I was doing

You and me both, ha.

I’m glad to have had some kind of influence!

Well, if I may indulge my fanboy-ness, Twink is one of my favourite musical projects of all time and I thank you for blessing my world with a little bit of magic

So, I could ask you things all day but hopefully that has given people a little bit of an insight into Twink. Is there anything else I should have asked or you would like to share?

That covers it! Thanks Graham, this was a fun one.

Thank you, if I might gently nudge you, where can people get a bit more info should they wish?

Check out http://twink.net which also has links to my various social media accounts. I’m usually posting something amusing on Twitter or Instagram.

Great, thanks for giving me your time Mike, it’s been a real honour to talk to you! 🙂