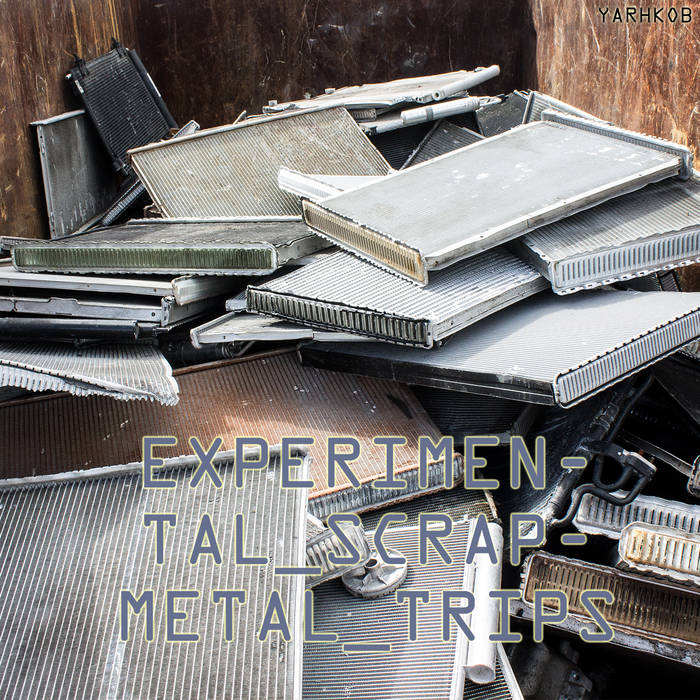 I wanted to take a shortcut home through the scrap metal yard, but what my ears heard while walking around, completely distracted me from ever going near my original destination. I walked and heard the mysterious sounds of what a voice in my head claimed to be coming from ‘a caged plant’. The strange metallic expressions in this part of the scrap metal yard came across so nicely organic that I had to hold in my breath to justify and embrace the content that was presented within the ears.

From here I climbed into another mysterious section, one in which high quality scrap yard metal introduces itself as a slow rhythmic and slumbering form of low lying creature. Something that was not yet seen or heard before and even though its high futuristic appeal had something from an older time. As if evolution has gone a different direction in this part of the scrap metal yard and organism and scrap metal had merged together to form an easy going & quite mesmerizing low laying new breed. It is a discovery that you would like to report too officials, and yet you don’t as it is happy to stay low in its own part of the yard. A voice in my head put a name to it, it was ‘metal hits’.

After this encounter more mystery and beauty seemed to erupt. An open part in the middle of the scrap metal yard in which small previously unknown and unheard space birds had made their nests. A warm ringing tone from some kind machinery kept the open space ringing in kindness, while lots of mysterious scrap metal organics moved by or appeared in the shadows. The greatest thing is that all these new unexplored new metallic life forms had something very friendly over them. These are not the creatures that will attack you, but more figurines that do their own precious thing while you do yours. From here nobody will care about meetings or further travel destinations, as within this part of the scrap metal nature you just want to sit and be fascinated by the sounds and movements. A voice in my head whispered that this should be called the section of ‘spiral metal’.

Getting deeper lost in the scrap metal yard I opened a gate and noticed that it was full of other gates.  It was an absurd psychedelic exposure as some of these gates are locked with padlocks and chains and yet they actively unlocked themselves in various orders and patterns. In this surreal world of maybe hundreds of metal gates opening and closing then selves you could hear the sound of potential bad weather in the dry background. The rattling chains, the collection of self-moving keys and opening padlocks had a mysteriously relaxing  attitude and what seemed to be something triggered by a mysterious unexplainable force, now felt normal and stimulating; it wasn’t scary, it was fascinating! The abrupt stop of it all made me think it was just a day dream. A voice popped in my head claiming it to be the sounds of ‘spectrum 4’.

The next part really hit my love for electronic industrialism; from here I couldn’t care less if it was a dream, or an actual reality. If I had to be stuck in this scrap metal yard forever I would be absolutely fine with it. Here a rhythmic sensation of scrap metal sounds became so sensationally pleasing that I became a dancing humanoid among the punk metal music. A voice came to me claiming it was ‘dd4’ that was performed over here. Whatever you say voice, I think if it would be called ‘Awesome’ it would have been fine to me too.

A calmer section doomed up in the next exploring session. It had something musical, something melodic and yet abstract. Perhaps a little scrap metal UFO encounter that lifted up in the middle of the scrap metal yard. I’m always skeptical, so it’s probably best to be a bit vague in claiming that it was definitely an alien something flying up from the metal scrap yard. ‘Korgkaos’ the voice in my head whispered; it didn’t make much sense at all.

Suddenly I had noticed that time had passed. In fact: a lot of time had passed. I came into this scrap metal yard for a shortcut in broad daylight & now it was night with a full moon lighting the scrap metal up. Slowly ai moved over and through the metal material while the sound of some howling ancient prayer rang through the yard. It was as if a nearby metal mosk was bringing out the right set of atmospheric ambient to make this darkness into something pleasant.

From here I walked slowly further through the scrap metal yard, admittedly lost as it could be & yet so fascinated by the sounds of the surroundings that it was by far a bad experience. The darkness of the night had great impact of the visual receptors, but the drone sounds of mysterious warm darkness. along the ones coming from small appearances of potential animals was quite comforting to spend the visual shortcomings in.

Spending more time in the scrapyard in these mysterious evening hours becomes strangely odd and full of active metallic activities. The night is full clutter, ramblings, organic weirdness that is busy in a way night workers would fix and create things when most commuters sleep. A whisper in my ear tells me that this special time is called Poly 5 NOISE.

Then the wonderful experience turns into a drastic new region. This is a disturbance of nightmarish origins, haunting in a disturbing sharpness that could rip anyone apart like an army of alien circle-saws. This grueling moment of pure ‘drone doom’ action seems to be the evil part of the metal scrapyard experience, bringing an extensional digital freight of monstrous proportions to the dark scenery. It’s the sound of Mad Max on steroids with evil magical tones brewing in the dusty industrial drone scale of grandiose proportions. It’s scary and thick and yet it keeps intriguing to the final end; if it’s the end, at least it’s a spectacular one!

But it’s not the final, final end as the real end of the metal scrap yard comes in a calmer, yet mysterious corner. A place that’s nice to slide through with the functionality of a near cliffhanger. I’ve managed to escape the amazing shortcut adventure and found my destination, but for you; it’s recommended to take this detour of amazing scrapyard metal amazedness:
https://dogparkrecords.bandcamp.com/album/yarhkob-experimental-scrapmetal-trips
<KN>