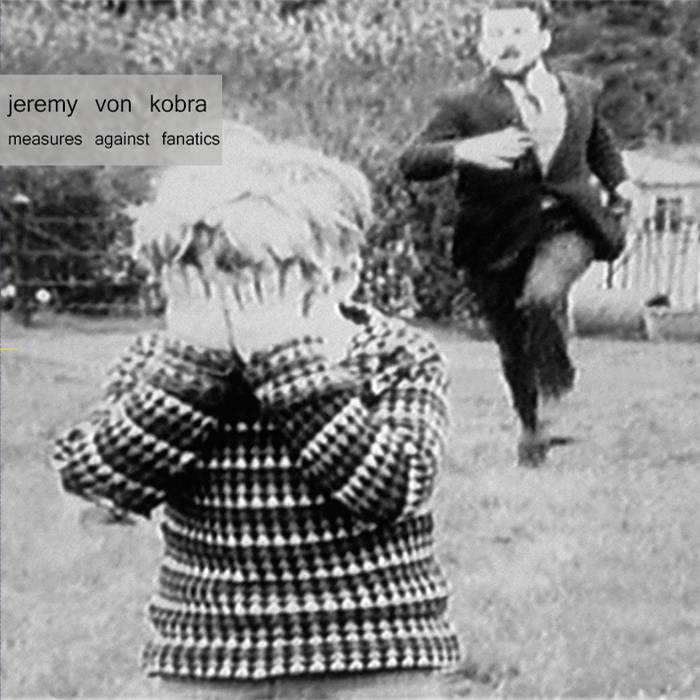 It isn’t recommended to take the ‘measures Against Fanatics’ done by ‘Jeremy Von Kobra’ lightly. These measures are put in place in a way that fanatics wouldn’t have a clue what would hit them. As a fanatic I’ve been captured by it, and write this review for you from deep within one of these measures.

Don’t say that you are not fanatic enough for it to happen to you, as One moment you are fanatically surrounding yourself in a collection of fine experimental audio soundscapes, and in another your catapulted into a cinematic orchestral exposure. It will be hard to crawl out once such a thing happens… You have been warned! Once captured, you might find to be entrapped into a post apocalyptic scenery in which industrial madness teases the imagination, a place in which it wouldn’t be unlikely to find dinosaurs trapped in a mad max sequel.

There are moments of nightmarish material; something to scream at the moon for.. But there are also places in which a certain realm of peace can be heard. Somehow high bleeping noises are flying through the entrapment that every listener will go through; something that evokes the sounds of silence with soft sound surroundings of a surreal kind. The bleeping noises take shape as if they are lonely (and perhaps hungry) birds, but somehow it is pleasant to hear life in this situation.

The strange locked-up surreal audio experience is getting something out of our existence , something that we had hardly been aware off; a next level vibe of survival fanaticism that rolls on orchestral rolls and steam-train monsters. It might be a scenario for a nightmare, but in my personal experience; I feel it’s the sound of other entrapped fanatics crying, howling, and shouting like elephants, in order to be released and report on this release in their fanatic ways. It is here that I join them and scream like an elephant too. Tooooot Toooot!

When the measure is pissed off, you will definitely notice the change in tone and sound. What was first warm and muzzled, is now transformed into a wild electrifying anger; the walls of fanatic entrapment begin to shiver and shake, until a sinister drone overrules all the commotion. From here the situation becomes calm and strangely accepting. It isn’t clear to me if we ever get out of this release, but even though being stuck; it appears to come across as the delivery of an surreal happy (and sad?) ending. Be careful when proceeding to the next level by clicking the following link: https://dogparkrecords.bandcamp.com/album/jeremy-von-kobra-measures-against-fanatics
<KN>