The Dead Heads – Beast of Gevaudan 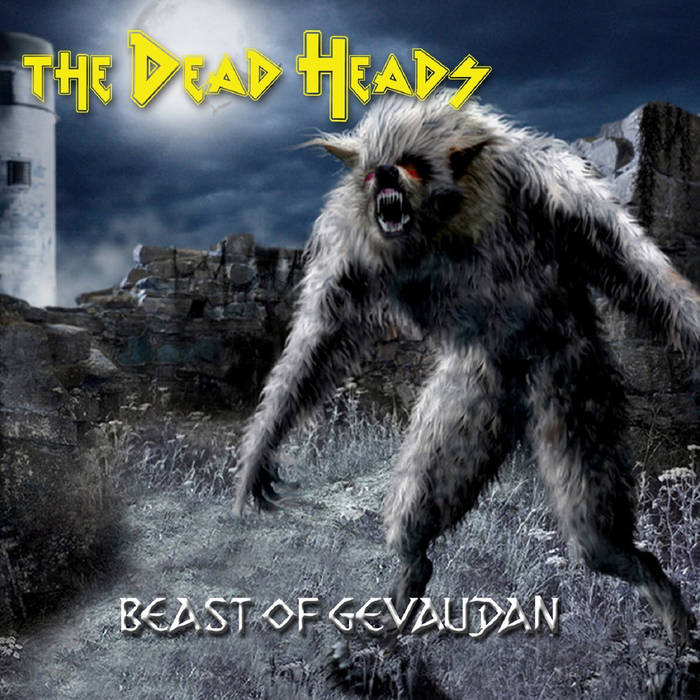 I don’t know what scares me more, The Dead Heads or a certain Beast of Gevaudan, but I figured 1 + 1 = 0, so when The Dead Heads brought the ‘Beast Of Gevaudan’ in music form I figured it was a safe thing to listen.
And indeed, it started very well and good; a track ‘Salmon of Wisdom’ which had a jazzy but steady swing to the Dead Heads blues brother’s like story telling. It suited perfectly with my morning cup of coffee, which is reason for a thumbs up as I was sincerely scared The Dead Heads would ruin the morning ritual.

But.. No.. the coffee was good and the music didn’t disappoint too. The release continues with a ‘Free Hug (Pass It On) song, which really felt to me like a personal gift to do and go for. It was as the music virtually gave me a hug, and I hugged back in order to make all that was said and done between the devils in my mind and The Dead Heads  like it never happened. The sound had something eighties, with a big beat drum and heavy on the baseline; I was expecting to see the ghost of Michael Jackson dancing in the background while dressed in Halloween costume; even more reason to hug!

The release went on with ‘Signature Clamboat’ which suddenly changed tempo and mood; everything got hyped up, a mixture of rock and roll speed punk. It was as if the caffeine in my morning coffee suddenly kicked in and The Dead Heads where working hard to get my toes moving in spastic ways. It didn’t work just yet, it was simply to early for that.. or how lame comedians would say; Too Soon?

OK to Run’ was up next, and here I again regained confidence that it was a good thing to recheck the music by these Dead Heads; they are the good folk, the good crowd; people with a sense of humor. (bless them, as there are so few of them!) And it has to be said, considering this is just four tracks in the ‘Beast of Gevaudan’ experience; they are pretty skilled at their musical tools. It’s nice of them to imply that it’s okay to run away, but I think that I’ll be able to go through this. I’ll stay and hear more! The music is quite nice, a bit like a galloping horsey in the evening wind after downing a firm glass of vodka. Maybe a good moment to add some liquor in the cup of good morning coffee?

Then there is ‘Craig McMuffin’ a track that seems to have something going on in a nice groovy shape. It began a bit stiff, but when the tune really started blazing I felt like the BeeGees would rise from their graves to point fabulously in the sky in their glitter pants. It was a moment of disco balls lighting up the ceilings, floors and everyone in my mind was partying at a very dodgy but fun party. It’s really a fun song, with a very effective baseline, rhythm and even the silly electric keyboard scratch thing works perfectly. Highly recommended!

The next one is ‘Rock On Bros’ and it sounds straight from another time; a time in which everyone had VCR’s, and the first Ghostbusters was hitting the cinemas. It has something familiar, but also inviting. It’s as if Prince, Tafkap or the artist formally known as ‘purple rain-man’ had hovered his head over this and gave The Dead Heads the ultimate seal of approval. Funky, groovy rock on roll for bluesy purple lovers! Time to finish the coffee and put on a hat with sunglasses & shake those hips like you just don’t care! great vocals too! (in case you missed them)

So the Dead Heads included another pitt-stop in which listeners could chose to continue or move on.. In other words they slipped in ‘OK to Run 2’. And screw them; nobody will be running away; everyone who arrives at this point will use the opportunity to feel the groovy stuff and show off sexy dance moves! Love the big trumpet flavored sounds over here; it really comes across as a entertaining big band that came to life out of a comic book.

ah… then there is ‘Project C.O.F.F.E.E.’ a fine reference that syncs to my own morning coffee session. The music invites to make another cup of this fine dark brew and experiment again with some alcoholic additives. The track is quite amazing; the dead heads start to go hip hop (or rap? or how the cool kids call it?). It sounds big and real, and they sound so tight on this nice moving beat and rhythm; it feels very American if you know what I mean: BIG, super sized even!

Dreads and Sheds’ is The Dead Heads shining their love on their own reggae side of life. It’s music wise quite minimal, doesn’t have the whole Jah thing going on; but still it feels sincere in a mediocre way. If that makes sense? It’s best not to write about the lyrics, as you are better off reading them on your own from their own Bandcamp page…

then there is the terrifying ‘Herr Grundsaudaag’ which seems to flirt with industrial electronica that goes all whacko. Lucky there are armed drum rolls to protect me and other obviously frightened listeners. Might this be the encounter of the Beast featured on the cover artwork?

At the final end of the ride there is ‘Leo Darkchild’ another kind of dark tune. Or a comedian version of a dark tune; It’s quite fun and in my head a scene folds out in which a David Bowie as a goblin kind shows off his enormous bulge while singing among adorable trolls who pass a baby around. It has something that would suit a movie, with excellent guitar solos, special effects and fitting words.

I think this is a great record in size and diversity. The Dead Heads didn’t scare me this time with a playlist of enormous proportions & the tunes are entertaining and fun. I’ll finished my morning coffees with liquor and have my hands free to present you a link to this album over here:
https://deadheadsmusic.bandcamp.com/album/beast-of-gevaudan
<KN>