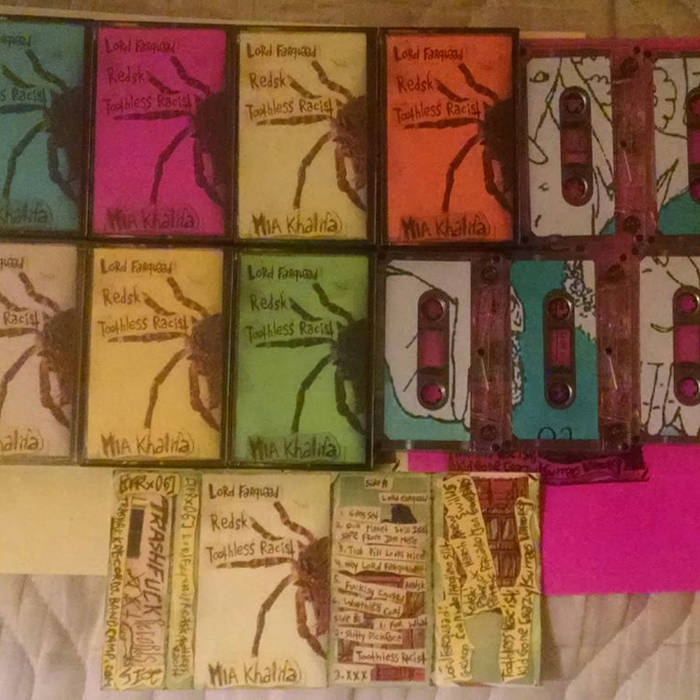 Lord Farquaad brings out some atmospheric gangster shit before going into next level Lo-fi black metal material. There is something strangely inviting within it; the music isn’t coming across violent but more of a kind that makes you want to wobble your head. The electric guitar, bass, drum material are coming together with fuzzy grunts that are more fun than evil. For some idiotic reason I imagine this being played by a band dressed as Muppets scaring the hell out of children, while at the same time inspiring some others.

This theme of a band made out of evil twin parodies of members of the Muppet show strangely doesn’t want to move out of my head when hearing the next tune. It’s called ‘Our Planet Still Isn’t Safe From Jam Music’ and comes in and before you know it; it’s gone out! Knock out!? It is short but also powerful in that it manages to throw in so many punches in such a small time frame; it needs more listens then just one to hear the drum roll, the electric guitar feedback and the straight up solid performance; a perfect example of a sufficient WTF attack.

That Pill Looks Nice’ sounds more solid, and feels a bit more serious. It’s as if Lord Farquaad shreds of the charade of entertainment to pick you by the shoulders and shake them around for a quick reality check. It might even kick you in the crotch a bit! It’s all good! Even though the tune feels lengthier, the exposure of its internal music is still done in such a way that people with slight brain-damage (especially with holes in the short term memory department) could probably hear it again and again in a row, and still don’t know what it is that makes you want to rehear it on repeat. In all honesty my short term memory is shit too, and so I’m asking you to hear this tune with your own ears & test out your own memory skills through these wildly exciting forms of extremity.

Lord Farquaad’s Lord Farquaad theme tune must be my personal favorite among these Lord Farquaad tracks. It’s rough, but solid and cranky. The short grunts are lots of fun, making me think of a couple of funny looking monsters that hide behind amplifiers and pop up to say ‘uh?!’ Then when the full energy gets flushed out it’s an ongoing thrill until the final end. I do not know ‘Lord Farquaad’ but from just hearing these four tracks I’m having strange positive thoughts of this lo-fi crunchy quick metal works. It’s probably not what Lord Farquaad would like, but I consider this as ‘good fun’!

Redsk however isn’t here to be generating smiles of fun, or maybe he is, but it feels more like an instant wipeout. The sound of Redsk’s ‘Fucking Coward’ is thick and full, leaving no time to waste as it goes quickly in full throttle mode. Comparing Redsk’s sound with Lord Farquaad would be impossible; they are seemingly miles apart. Redsk as a full band sounds extremely intensive and full on, it’s the sound that hypes me up in wanting to do something; destroying things, or even better; self-destruction! There is something so powerful in this instant burst of power that it gets blood pumping and a rush rushing… A wild orgy of animalistic crashes really kicks off the beginning of the end!

Redsk does not stop its instant mayhem with Worthless Cunt. It’s like listening to a band in which the drummer keeps drumming while being wildly electrocuted on an electric chair. Obviously the mouth is free to fill the air in a state of pain and terror. The collapse of a drum-kit never sounded so good when being played by obviously wild arm movements that hit the shit out of it. It’s so dense and intense that you better not play it at sleeping time; as it will wake you up and you feel like you want & need to kick things.

Redsk keeps the adrenaline pumping with ‘For What’. It’s as extreme as it is short, flaming my ears up like a morning wakeup call of a whole army of dick-faces slamming lots and pans next to your tender ears. It’s a progress that slips easy into ‘Shitty Dickface’ and ends up there. In my opinion these tracks in combination instantly replace the need for coffee in this world; just hear this and you’ll be riding a full blown adrenaline rush!

If you like what you hear or read, please consider to support real DIY releases,
by getting this incredible tape of extreme music over from the official shop on tape:
http://trashfuckrecords.tictail.com/product/lord-farquaad-redsk-toothless-racist-mia-khalifa
<KN>