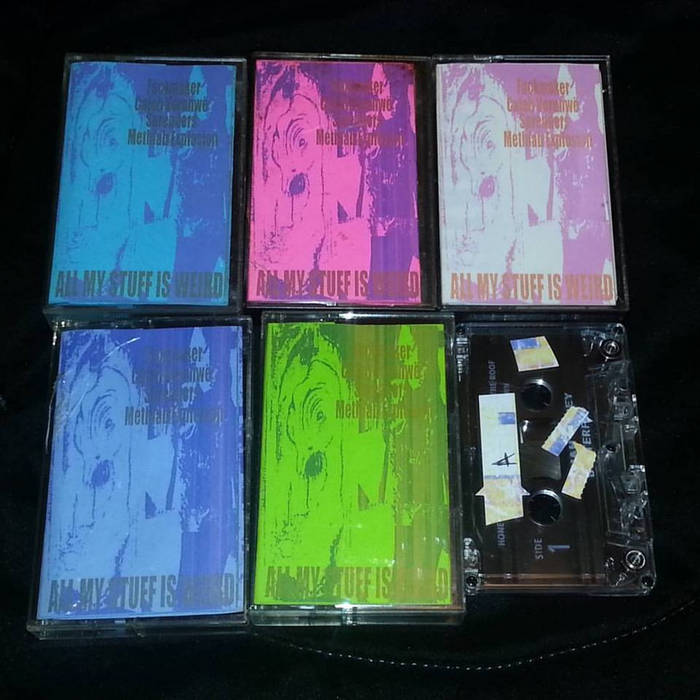 Fuckmaker doesn’t give a fuck about your sensitive ears as they will be annihilated through pure force. The instant loudness is wild and very crunchy, yet there is a mysterious tension within the unforgiving harshness to be found, some unexpected tones that screws the head into thinking that there is something melodic while in fact it is more a slight warning for a massive ear rape. Once the track is in and your head fully filled up with true noise you can be reassured that the bleeding from your ears might go on for at least a month.

Caleb Voronwë’s AM/FM keeps the pressure high and running, delivering an exciting track of harsh noise, that somehow gets the whole zone buzzing in a massive unforgiving coat of distortion. Music theme wise it made me feel like it’s inside a car, having the sound of window wipers wiping on the ‘extreme’ setting, and flipping channels on a car radio that has been trashed to death! All this while the whole car is trying to survive the destruction of a quick tornado.

Caleb returns with another work, this time a recording recorded live at Trashpad. Here he shows a very different take on noise, as the performance is as loud as it it’s wild. The artist would probably enjoy killing me when he reads this but there is something really jazzy about the noises that he makes on this live take. Jazz musicians might want to try and hear this (and if they survive) beat me up later… But in all seriousness the sounds are coming across to me as very loud, noisy, wild and jazzy. There is no need for a drumroll of a trumpet, as Caleb Voronwë has enough volume to say no to any traditional sounding sounds. Instead this is more industrial, as if the artist took a printer and smacked and pounded it so hard that it started to play jazz while being forced underway to the afterlife. A great highlighting moment is when the live audience is really feeling the tension, and the artist then infiltrate the bombastic wild sound with his prominently dominating classy voice; who cares about John Coltrane & the soothing voice of Chet baker when you can listen to this instead?

Spreaders is also on this ear rape tape in the form of a live recording. It’s probably the best thing to hear the live set live in person, but as a recording it certainly kept the manic pressure pumping like there is no tomorrow. The noises are of a kind that are quite original, with vocals and sounds that are as loud as they are weird. it’s as if my ears are being treated on a science fictional harsh world in which fireworks, destroying space lasers, and feedback had come over as big friends to create a perfect mental state of pure havoc. The sound that come out of the speakers are like the flames of alien engine that kidnap us all for an intensive space noise adventure.

Methlab Explosion is the last on down to terrorize the ears, and it’s probably the heaviest set on this release. First it kicks off like indeed a full frontal explosion, then the ears are being tickled by a light crackle in which the artist shortly introduces himself and thanks for being invited to play, and from there Methlab Explosion hoovers up everyone’s soul and hearing capabilities. There is a hypnotic base loop underlining the massive sucking of sound, and that’s the only thing to hold on too. The crackling hovering sound is having strange robotic machinery sounds that pop up here and there, giving it a futuristic feel. When Methlab Explosion throws in a scream you can feel that the noise is taking the listeners away into a harsher environment then the one on earth. A great escape captured on tape!
https://trashfuckrecords.bandcamp.com/album/all-my-stuff-is-weird
<KN>