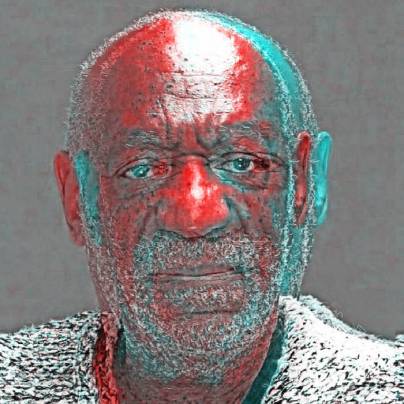 Buddies know what to do with this release; they listen to it together with their buddy ears. These buddies are right as this is a noise release that can be explored among friends & buddies alike as if it’s a movie for the mind (excluding the popcorn). It depends on your (or your buddies) imagination what you will see and fantasize about when the music plays, but in my case the audio story visualized itself a bit like this:

At the beginning the music made me visit a Buddhist temple in which a large group of monks sat down and chanted repetitive prayers. Then a ‘movie moment’ appeared in which me (and my buddies) felt like being suddenly teleported to a cinema with a crucial scene playing on the screen. This vision quickly disappeared as quick as it had come, bringing back the monks with a whole arsenal of sounds: People screaming, knives knifing, hammers hammering, machinery cluttering, an asthmatic cat squeezing and coughing up hairballs…

There is so much to hear that it leaves a lot to your own (and perhaps your buddies?) imagination, but it’s clear that the more the recording moves into the next gear; the wilder and the more insaner it gets. It’s as if we are in some hellish roller-coaster in which people scream and music from forgotten times functions as a graveyard with graves full of distortion.

It’s as disturbing as it is magnificent, the whole music versus animalistic human screams; a party in the hell that sounds (perhaps not unsurprisingly) very hot and wild. I might just have to add the word ‘nasty’ to this review, as the more you’ll hear the thrilling work the nastier it gets. The music becomes more and more noised up with am unclean assault of razor ladies cutting your eardrums up like possessed ghetto boys. When it’s all cut up you (and your buddies) are only be able to hear hissy flutes, and some secular background pieces that are hard to distinguish. And when you think that it couldn’t go possibly any harsher; it does in fact go harsher and harder.

It’s at this point that the hellish party zone really had left the building and replaced itself with a deaf making head crushing form of sound assault, something no normal human being (or a buddy) is out to survive in good shape or health. If you like to torture yourself with audio, then this might be the joyride you (and your buddies?) have been waiting for!

Then there is ‘microaggressive’ which involves a nice rough sounding guitar on too of a hissy wind that made me think of the artist performing on top of a airplane wing winkle the airplane is flying midair. Than the track levels up with a assault of machine gun riffs that feels militant and aggressive, only to make way at times to bring some form of hope with a little guitar solo… But there is no hope really; this music will rinse and shoot your brains away like a water hose filled with oil, and then lighted on fire! Better keep a fire extinguisher close at hands and near your ears, as you (and your buddies) probably need it.. There is a whole load of ear stabbing going on, some in a plastic way and others have more a wooden crackle sound; but whatever it is that will penetrate your head (or the heads of your buddies) into total destruction; it does its job surprisingly well.

The last part that you can enjoy alone or with buddies is ‘singular gape waves’ which is like sitting on a hot burning tongue of a demonic dragon with a speedy electric guitar superstar who is burning forever giving you a show as you suffer. This must be the track that makes me feel like it rises above the hell to get a great view of it all below. I think this is a little pre taste of the underground filled up with fire, monstrous demons and eternal suffering; so if that sounds like your ideal vacation or hobby to listen alone or with your buddies, then please follow this link:
https://randyspike.bandcamp.com/album/trans-sister-radio