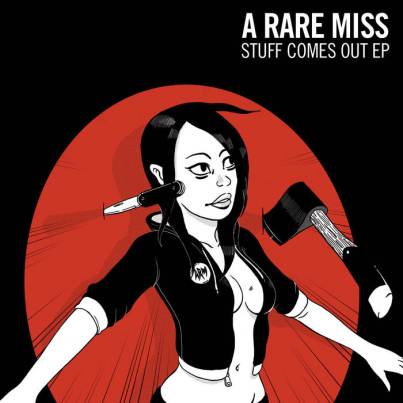 Let’s go to Amsterdam, the place to be of you like red lights and water in between streets. From this lovely Dutch city operates A Little Miss which comes across like a band with hair on their teeth. You know; a bit gritty, a bit raw, whose music might want to kick some people in their nuts and some others in their bush. (All in good fun of course!)

But don’t expect the absolute “mad” and the absolute “crazy” when hearing this music coming from this mad and crazy city, as it has a more ‘tell it like it is’ attitude than the more ‘do you want to buy back your own stolen bicycle on a bridge?’ one. It’s serious stuff; guitars, drums and a miss and a mister singing words to form songs.

The smell of freshly spoiled beers is not included, but is easy to imagine when hearing these tracks. It’s also easy to spot that it makes ‘thirsty’ hearing these tunes; somehow it feels that Dutch beers and the music done by ‘A Little Miss’ belong together like a lime in a glass of lemon tea. (Impossible to drink without!)

The highlight must be a song named ‘Fred’ in which Fred gets his own little song, as it’s a song about Fred. The electric guitar is also a highlight on its own, as it’s being played a bit like a menacing maniac that likes to steal candy from people with candy; it’s like someone is pointing a finger in your face and laughing at you while doing it in a cool and planned way. Or perhaps that’s me in need of beers and me feeling that the people around them enjoying themselves have plenty?

I did find it a bit strange why the artwork features this girl with black hair that seems a bit of a punk, and in the live footage as seen on YouTube the woman in the band spots blond short hair and a cocktail dress.

^ A Rare Miss’ in real life

It’s a bit like Milli Vanilli or just a case of artistic freedom; after all it’s the cover that got me to listen to this EP.

In any way ‘A Rare Miss’ seems to be having fun by doing what they like, and seeing them play in a Dutch performance bar place like ‘Waterhole’ is a bit of a sentimental blessing. This is the place in which many pints of beers mysteriously disappear down people’s throats, bikers at the door and a cozy atmosphere; making it the perfect stage for ‘A Little Miss’s energy and their brand of music.