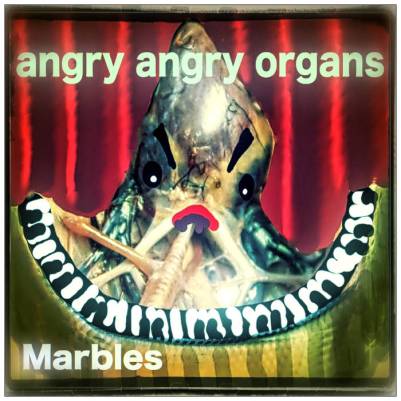 If you have lost your marbles the search is over; as here they are again. And these lovely marbles also brought a friend, consisting of multiple little friends. You know an album with album tracks… And it’s best to download them all and play them in continues order, so you’ll not only have your marbles back in your head, but you’ll also have no gap in between.

So what have the Marbles been up to? Well basically they have been rolling around and picking up things to entertain you when you put then back into your brain again: From snippets of hit singles that they had picked up from the radio, to pretty guitar mumbling and of course ‘angry angry organs’. There is a bit of cursing here and there too, but in general speaking the marbles are bringing quite an cultural mélange that keeps your ass half wobbling on the side of your bar stool. (Depending on if you are seated on a bar stool that is). And even the title of the release might come across a bit like aggressive madness, the actual content is much milder and more of a style that could be enjoyed by all your drunk friends half seated on other bar stools (that is if they are seating on bar stools that is).

The marbles’s album might be 12 tracks long, they are from such a diversity in entertainment that the whole bunch greatly passes by like an evening hanging at a bar with your ass half wobbling on a bar stool. (That is if you are lucky enough to sit in a bar on a bar stool). It’s a bit chill, a bit weird and never seems to end even though all passes by so quickly. Can someone ring the bell at the bar so everyone can have a free drink to celebrate? It’s the kind of music you best heard on a bar stool with some alcohol in your system, so if you aren’t; arrange something and hear the album at the following link:
Themarbles.bandcamp.com
<KN>